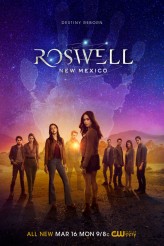 The executive producer talks about the CW reboot 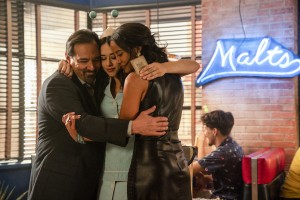 The CW’s ROSWELL, NEW MEXICO is now on Monday nights in its second season. In the first season, young medical researcher Liz Ortecho (Jeanine Mason) returned to her hometown of Roswell, New Mexico after years away to find out that her first love, Sheriff’s Department Deputy Max Evans (Nathan Parsons), his sister Isobel (Lily Cowles) and their brother Michael (Michael Vlamis) are all actually from another planet. Season 1 ended with Max sacrificing his life in order to resurrect Liz’s sister Rosa (Amber Midthunder).

As ROSWELL, NEW MEXICO Season 2 begins, Liz and her sometimes boyfriend Dr. Kyle Valenti (Michael Trevino), along with Isobel and Michael, are trying to figure out some way to bring Max back. Rosa, meanwhile, is having visions of Max begging her to stop the others from making the attempt.

ROSWELL, NEW MEXICO co-show runner/executive producer Christopher Hollier fills us in, without getting too spoilery, on Season 2.

ASSIGNMENT X: What can you tease for Season 2? Nathan Parsons is still part of the cast, so one would guess Max doesn’t stay dead …

CHRISTOPHER HOLLIER: I don’t know. Rosa was dead the entire [first] season, we had her on the show. So it’s hard to tell. Every day we sit in the room and we try to figure out, how can we flip the script on every level. So … 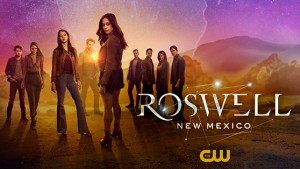 AX: Will we be seeing aliens from multiple worlds, or just the one that Max, Isobel and Michael are from for the time being?

HOLLIER: I don’t know. I don’t know exactly how to answer that as we sort of jump into the pool this season. So I say anything’s a possibility.

AX: Last season, when she was herself, Isobel didn’t like Rosa. However, when Isobel was possessed by her husband Noah, played by Karan Oberoi, back when Isobel didn’t know he was also an alien, Isobel and Rosa were friendly. Is Isabel still going to have any friendly feelings for Rosa this season?

HOLLIER: Well, last year, that was actually all through Noah. We saw it. It was very interesting how we walked that line. I will say this. We do address that this season. We’ve had discussions about that, we’ve mapped out stories for it, so we’re going to get another bite at their, I’ll just say, relationship.

AX: Claudia Black plays Max and Isobel’s adoptive human mother. Was that casting out of fandom for STARGATE/FARSCAPE?

HOLLIER: Firstly, she was cast because she’s awesome. [ROSWELL, NEW MEXICO creator] Carina [Adly MacKenzie] and I both worked with her on THE ORIGINALS as well. And she also brings that huge cachet of that genre stuff. We talked about a story for Claudia Black, so I would look for her to make a return on some level in Season 2.

AX: ROSWELL, NEW MEXICO is actually shot in Sante Fe, New Mexico. Does that location change anything you wanted to do for good or ill?

HOLLIER: It’s actually helping us deepen our own mythology. Carina and I spent a lot of time over the summer looking at what actual things exist in Santa Fe and New Mexico for us to pull from. There’s so much of the Manhattan Project, so much science that was actually done by our government, in that place, that we’ve looked at a lot of that and blended that with the cultures that lived there.

HOLLIER: We’re looking at all of it, actually. One of the things I’m really proud about is that we continue to diversify our room, so knowing some of those elements, we brought more of that in, so we have a lot to pick and choose from, and sort of blend. 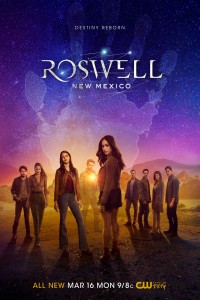 AX: Besides the earlier ROSWELL series, which your show is based on, have you looked at any other shows that have dealt with Roswell and gone, “Okay, maybe we can tweak that,” or, “We really don’t want to do that”? For example, THE X-FILES has had a lot of Roswell …

HOLLIER: Sure. There are some people that are huge, huge fans of those, and we try to break in a vacuum. And then sometimes if we touch the same things, someone will bring it up, and we’ll see if we can spin it, or if we want to do an homage to it, but we’re always looking for our unique take on that line.

HOLLIER: I’ll say that our cast is great, so it’s fun to write for all of them. I really liked writing for Michael. I thought he was a lot of fun, just because he’s got a devious streak in him.

AX: In ROSWELL, NEW MEXICO Season 1, what do you feel best about, what are you happiest about?

HOLLIER: I actually like that we held the twist. One of my favorite things is watching people read online who they thought the villain was, being wrong, people loving and rooting for Noah, and all the while, he was actually the villain, disguised the whole time. So that was my favorite thing to watch it land.

HOLLIER: Definitely bigger. Carina very smartly broke something that was very small just as it started, knowing that we wanted to grow it, so we definitely have a plan – I think it takes a big step up. We have a lot more new characters coming in, and the world is definitely going to feel bigger.

HOLLIER: Come back and watch. If they think they’ve got their firm footing on what we’ve got to show them, we actually have a whole other big, big box of where to take this story.