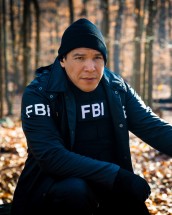 The actor talks about the new CBS drama 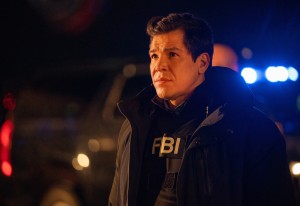 FBI: MOST WANTED, on CBS Tuesday nights in its first season, is a spin-off of the network’s FBI. Both series are executive-produced by the prolific Dick Wolf.

In FBI: MOST WANTED, Nathaniel Arcand plays Special Agent Clinton Skye, part of the Bureau’s Fugitive Task Force under the command of Supervisory Special Agent Jess LaCroix (Julian McMahon). Arcand and his character were both introduced in the FBI series in 2019.

Clinton Skye is a Native American of Mohawk descent. Arcand, who is of First Nations Plains Cree ancestry, says of Clinton, “I love the fact that there is a Native [American] character in this team of FBI agents. For me, that’s something to be proud of, because you don’t always see that in any kind of shows, the Native doctor, Native physician, Native whatever. And so for me to play this kind of character is huge, and I’m very grateful. I have to say, I pay respect to the Mohawk people here, too. The character is very diverse in the sense where his family comes from a long line of ironworkers, and he chose to be an FBI agent.”

ASSIGNMENT X: If this isn’t too spoilery, in the first season of FBI: MOST WANTED, do we get much of Clinton Skye’s back story, if you have a family, why you’re in the FBI?

NATHANIEL ARCAND: Yeah. Throughout the show, everybody’s characters are revealed a little bit more, of who they are and where they come from. Mine, I think it’s in the eighth episode, it deals with more who I am, where I come from, and things I might have dealt with when I was a young man. I think throughout the season, we’ll have little bits and pieces of each character that divulge a little bit more personal info on the characters. I like that about the show. 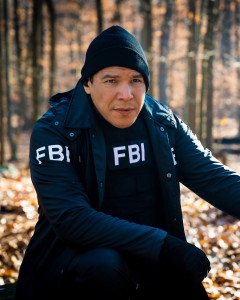 AX: Was there anything you learned about U.S. law enforcement in your research for Clinton that surprised you?

ARCAND: I think it’s all general knowledge if you pay attention to television and things like that, and law enforcement in general, right? You get the gist of it, and then it’s not much different than what you see in Canada and elsewhere. But I think there’s a difference between a police officer and an FBI agent. An FBI agent is the elite of the police officers, I would say. When you become an FBI agent, you’re not only working for your people in that region, but for the whole country itself. That’s the whole difference.

AX: Did you have to do any training for your role?

ARCAND: We trained with an FBI technical advisor in terms of jargon, how to speak like [an FBI agent], how to say, “Freeze, FBI,” things like that. And then just things in the office, how we would go about doing things, how we are as a team usually. And then the tactical training with the rifles and guns, handguns and anything to make it that much more real as we’re running down a hallway and we’re following each other, got each other’s backs, things like that. And it looks real, because for us, it means a lot. You don’t want to go in there and it’s like you’re holding your gun the wrong way, or you’re taking a room the wrong way. It’s important. I think it shows how much we absorb these roles as characters.

AX: Obviously, when the FBI are rushing in for real, they’ve been trained to do it that way. When you and the actors playing your teammates are doing it for camera, is that more like choreography, so you don’t bump into each other or are too far spaced apart?

ARCAND: Yeah, definitely. There’s a lot of rehearsals, and we have to go through that. We talk to the real people first and say, “What would happen in this situation?” But for TV land, we’ve got to do it this way. Because you want to show the heroes. Otherwise, it might go a little bit differently, but not so much. We get great advice from the real people involved, the real SWAT, the real FBI people, and they give us great advice on who would be first, who would be back behind, and where the positions would be. And then we go through it over and over again until we’ve got it nicely down, and then on “Action,” we’re doing it like that’s what we really do for a living.

AX: FBI: MOST WANTED shoots in New York. Had you worked in New York before?

ARCAND: I’d worked on a couple of other shows, a movie I did fifteen years ago, and then I did a guest-starring episode on the TV series BULL. That was a great little experience, and I got to know a little bit of New York at that point.

AX: The ratings for FBI: MOST WANTED have been excellent. Did you have a good sense of confidence coming onto the show of, “Okay, it’s a Dick Wolf law procedural it’ll probably get through its first season okay”?

ARCAND: You know, I was just happy to be here, representing. To work for Dick Wolf. I think that’s most actors’ dream, to be working with somebody like that. You come into a successful production company that will put up the numbers like this show does, and then other shows that he’s worked on. It’s overwhelming sometimes, when you think about it. Honestly, this is my first time in this kind of situation, where I’m on a very successful show already, and to be here with this great cast that we have, I think everybody is owed a little bit of congratulations on that, the actors, the writers, producers, everybody involved.

AX: And what would you most like people to know about FBI: MOST WANTED?

ARCAND: I think the show is very action-packed. It’s always moving. These are based on real stories, and the FBI have tracked down these most wanted criminals, and I think that’s the most intriguing part of this, that we’re always on the go and we’re looking to catch our most wanted fugitives.