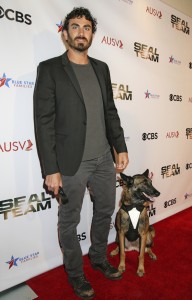 Justin Melnik and Dita at The Academy of United States Veterans and Blue Star Families hosting a screening of the season two premiere of SEAL TEAM with the cast, on September 25, 2018 at the American Legion Post 43 in Hollywood, CA | ©2018 CBS/Francis Specker

SEAL TEAM, now in its third season Wednesday nights on CBS, follows the adventures of the heroic U.S. Navy SEAL Bravo Team, under the command of Jason Hayes (David Boreanaz).

Former real-life Daleville, Indiana police officer Justin Melnick plays Brock, Bravo Team’s canine handler. This is Melnick’s first series role. It’s often said that Hollywood careers are built on who you know. In Melnick’s case, he got the part because of his dog Dita, a female Belgian Malinois who plays Cerberus. Cerberus, Melnick explains, is “a male dual-purpose Belgian Malinois that specializes in explosive detection and human apprehension.”

Melnick and Dita are together at an outdoor event held by CBS for the press. Melnick does most of the talking, but it turns out that Dita is capable of answering a question as well.

ASSIGNMENT X: This is a tweaky question you may not know the answer to, but on PERSON OF INTEREST, they also had a Belgian Malinois. Is that CBS’s preferred breed of dog for some reason?

JUSTIN MELNICK: After Dita got on the show, and her Instagram kind of went viral, her original breeders reached out to me through social media, and I knew they were legit, because they sent me some pictures of her that I’d seen as a puppy, and they knew the right information. Dita’s cousin was that dog from PERSON OF INTEREST. Dita was slated to be a police dog in her life. So it’s very unique that she ends up on television, and even more coincidental that her cousin was the dog from PERSON OF INTEREST, which was also a CBS show. Jim Caviezel, who was supposed to be our original Jason Hayes, was on that show, too. Coincidence? I think more like conspiracy theory. Just kidding.

AX: In SEAL TEAM, you play Brock, but do you ever double as people Dita attacks?

MELNICK: If she’s getting a bad guy, if she’s attacking someone, one episode, I put on the bite suit for a montage we were doing during Season 1, but it was me catching her as playing around on the base, killing time. But every other time we set it up as an actual real-life scenario for her, and we use the stunt guy who’s been trained to catch dogs.

AX: And she knows the stunt guy is not really a bad guy?

MELNICK: It’s only a game to her.

AX: Does she know that from having been a real-life police dog?

MELNICK: She’s a single-purpose police dog, which means her only skill set is detection. She’s a narcotics dog. Her secondary duty is to do dog awareness for kids, so K through 4, we go into all of our schools, we do dog awareness. She goes to recess with the kids, plays with them on the playground. We like to call her the glue of our community, because she really gets out there and brings people in, within our community and our school.

AX: Has she ever narced on anybody on set?

MELNICK: No. I mean, marijuana is legal in the state of California, so – I remember our first time in L.A. We went to the Soho House, and she was going around and she was indicating on like every tenth person in there [laughs]. And people were like, “Oh, your dog’s so cute! Does she want a dog treat?” I’m like, “Not the kind of treats you’ve got” [laughs]. I’m like, “Deets, we’re not working! You can’t violate people’s Fourth Amendment rights!” 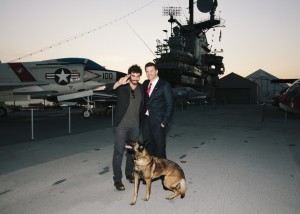 Justin Melnick, David Boreanaz and Dita as the The CBS Veterans Network previews the Pilot of SEAL Team on The USS Intrepid | ©2017 CBS/Michele Crowe

AX: Did you and/or Dita have to audition for SEAL TEAM, or were you just hired outright?

MELNICK: We fell into it. So one of the executive producers and one of the producers knew her, and they asked me if I could bring her in for the pilot episode.

AX: So they just said, “Hey, we would like this dog, and they knew Dita from knowing you, or they knew her from the breeder …?

MELNICK: They knew her from me, and they had seen what she’s capable of doing, and her temperament. She really is one in a million dog. So the dog was supposed to be in it, I was supposed to be a stunt guy, and the dog was supposed to live with one of the other characters on camera. And the show runner looked at me, and was like, “You look like a SEAL,” and put me in, and was like, “Go for it.” I’m like, “Huh? What?” And then by the end of the pilot episode, the creator wrote my character a name. So it was really a unique set of circumstances that led to a completely different lifestyle for us [laughs], which has been really special, because as a small-town cop, we can only really affect one small community, but being on this TV show and having – we can do a lot more good for a lot of communities, and really get out there and put our public service to work through this show, which has been a blessing from God.

AX: Did you come out to Hollywood for Dita’s career, or your career, or how did that happen?

MELNICK: So after SEAL TEAM got picked up [following the pilot], they called me back, and they invited me back to the show as a consultant for it, as Brock, the canine handler on the team. And they invited her back as Cerberus, the dog on the team. So it’s kind of a combination of both of us getting an opportunity of a lifetime.

AX: How has Brock’s personality evolved over the three seasons?

MELNICK: My character is really based around just being there for the dog. We have a lot of phenomenal actors on this show, and we only have forty-five minutes an episode. So the idea is, these guys have a story to tell. Anything I can ever do to be part of that story, and help and be an asset, I’m there for, but the rest of it, I’ve been in every single episode, but I’m not a main character in the show. I’m there when the dog needs to do something, or there’s a reason for me.

AX: Does Dita have specific things that she particularly enjoys doing on SEAL TEAM?

MELNICK: She loves searching. She loves to find stuff, she loves tracking, which also falls under searching, but it’s a little bit different, it’s more like up a mountainside, versus searching suitcases in a building. She loves being able to go get the bad guys.

AX: When she’s searching, do you put out particular things for her to find?

MELNICK: Always. So it doesn’t boring. We’ll usually start out with her odors – we’ll do synthetic odors, which are basically pseudos. When that starts getting boring for her, we’ll start throwing toys up. The secret is, you have to keep it fun for a dog. It’s like for anybody, you’ve got to keep it fun for them, otherwise, they’re not going to want to do it. 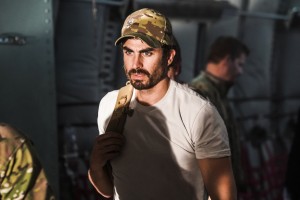 AX: How many takes does Dita normally have in her?

MELNICK: [addressing Dita] Hey, Deets, how many takes does it take you to do your job? How many? Tell her.

MELNICK: The episode where she did the ladder into the building, that was one take. We did a second take with a different point of view, but she usually nails her marks on the first go-round. She’s pretty good, and we keep it realistic. So it’s not like having her beg for a treat or make funny faces. Her job is to go find the bad guy, or to jump through a window, or to alert on an explosive device.

AX: How many takes do you normally need when Brock is onscreen?

MELNICK: Man, I mess everything up twice [laughs]. I wish I had her level of skill. She’s really one to watch.

AX: SEAL TEAM is your first gig as a TV series regular. Is being a regular on a TV series what you thought it would be?

MELNICK: We go in every morning, and we finish late every night. We show up like any other job, and we put in a hundred percent. We get hurt, we get sick, but you know what, we all show up the next day to work, because what we’re building is so much bigger than any one of us individually. We work on a show that represents America’s heroes, and it is so incredibly important that we do it right. And the writers do such an incredible job of creating that blueprint, the directors are doing such a phenomenal job of showing that, and then you’ve got the actors on this show, who blow my mind every single day. It’s not hard to be there and get lost in the scene, because these men and women are crushing it. They are so phenomenal, so inspiring, and so motivating.

And all of them care about the subject as well. Everyone here realizes the cost of war of the last nineteen years. It’s not only the battlefield scars that are coming home, the physical, visual ones, but the internal ones. That’s what’s so important right now. We are shedding light on a subject that is plaguing America, and these veterans need the media’s support. One politician protesting a cause is one thing, but you get a TV show with twelve million viewers getting behind something, we might be able to make a difference and help the people that have sacrificed and risked so much to keep us safe here at home.

AX: And then veterans often get treated very poorly often when they return …

MELNICK: I think there have been a lot of experiences that aren’t so positive. I’m sure there are some positive experiences, too. I’m not saying any one organization is doing a bad job, but I’m saying this – as Americans, we owe it to our men and women that have served this country to give a hundred percent. And even the best is not good enough.

AX: Are you a veteran?

MELNICK: No. Never served in the military. A police officer, but you can’t compare the two. We’re talking about men and women that don’t see their kids for a year. It’s incredibly close to home. I’ve lost a lot of friends over the last nineteen years, and I’m sure I’ll continue to lose some more, but we’re creating a product that tells their stories, and legends live forever.

AX: Were you surprised or just gratified when SEAL TEAM got picked up for its second and third seasons?

MELNICK: Oh, so happy. It is a blessing from God on all levels. It’s a fun job, it’s a creative job. I could sit here and you’d think I’m just blowing smoke, but really, I’ve worked a lot of jobs in a lot of different countries throughout my entire life, from pumping gas to combat photography, and I tell you, this is the hardest job I’ve ever had to do, the most demanding job, but also the most rewarding job.

AX: And what would you most like people to know about SEAL TEAM Season 3?

MELNICK: I would say this. Tune in. The dive into what these men and women are going to experience is going to keep you glued to the television. I’m so incredibly proud of what we’re doing right now, and I’m so thrilled to share it with you all.