The producers talk the drama's basis in reality 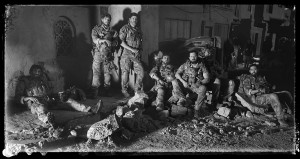 Sarah Timberman and Ed Redlich are both executive producers on the series about the elite military team; Redlich has also written two episodes. The pair are also married to one another. Standing on near the set for the interior of the SEAL Team airplane, Timberman and Redlich talk about the production company’s efforts to make SEAL TEAM as realistic as possible.

ASSIGNMENT X: Can you talk a little bit about how the SEAL TEAM series came together in the first place?

SARAH TIMBERMAN: That’s kind of a long story. A writer named Becky Mode, who is a playwright, who wrote FULLY COMMITTED, which was on Broadway, developed a pilot for CBS with us [in 2016], and it was about the military, and we ended up shooting it, and CBS was very supportive of it, but for a variety of reasons, it didn’t get on the air. After that, Christina Davis, who until [2017] recently ran drama here [at CBS], said, “You know what? That’s a community we really need to portray. We should try this again.” [SEAL TEAM executive producer/director] Chris Chulack had a relationship with people in the SEAL community, and had previously developed a project in the cable world, about similar characters, and he wound up talking to CBS about it, and they said, “This is something that we really want to get right.” So they put us together, because my company [Timberman-Beverly Productions, in which Timberman is partnered with Carl Beverly, also an executive producer on SEAL TEAM] had done this [other] show the year before. So CBS discovered that Chris Chulack knew people in the SEAL community, specifically, people who had been involved in these very high-level legendary operations, they had [been featured in] a 60 MINUTES piece, and they approached Carl [Beverly] and me, and said, “Are you interested in trying this again?” And we said, “Sure.” And [SEAL TEAM creator] Ben Cavell is one of my writers that I worked with on JUSTIFIED, and so it’s very much all in the family. We didn’t know Chris – now we’re all in this together, and there you have it. But [real-life former SEAL Team Six member] Mark Owen, who’s also an executive producer, had been on 60 MINUTES, and CBS had been interested in him since his 60 MINUTES piece, and so he saw it as an opportunity to bring in other people in the Tier One community, from the SEAL world and from Delta Force. That’s how he roped in all these guys with us.

TIMBERMAN: That’s right. Only now, actually, there are a bunch of newspaper articles about, there are two women, one is endeavoring to become an officer among the SEALs, and our stories will reflect reality. We were tempted to have a female SEAL, but there wasn’t one on a SEAL Team Six level, and we didn’t want to make something up that didn’t reflect reality. That may change in coming years, so we’ll see.

AX: You have Mark Owen and other military personnel advising you on SEAL TEAM. Would it even be possible to make a series like this without their involvement?

TIMBERMAN: Based on our very close involvement with people who come through, our Tier 1 operators from the SEALs and the Delta Force, what we know now is that we would’ve gotten a thousand things wrong. There’s no possible way to do this.

ED REDLICH: It’s not like a cop show or a lawyer show. I was a lawyer for a year and a day. You kind of know the moves, you sort of know where to go. This is crazy different. We need them. We go, “Okay, they land, and then what do they do?” Nobody knows. Not even the strongest writers that we have.

TIMBERMAN: And it goes beyond “what do they do” technically. It’s “What does it feel like in that moment?” There’s a helicopter sequence in the pilot, and there’s music playing over the sequence, and we got a lot of feedback about what they’d be listening to on a transport plane, and what their conversation would be going in.

REDLICH: It really is like, how do you get your head around it? You can kind of imagine yourself being a doctor, being something else [professionally]. What [the SEALs] do – the number of times they’ve been shot at, the number of times they’ve shot at people, when they’re on deployment in Iraq, sleeping all day, going out every night, you just can’t get your head around it. So you either stand back and go, “Okay, I can’t process that,” or you try to dig into it, and get them to talk. And not all of them are willing to speak, but we’ve become closer, and the more people trust each other, the more people talk about how they really feel, and that’s what goes, I hope, into the scripts. But we couldn’t take a step without them. 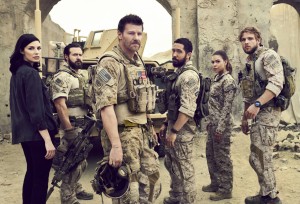 TIMBERMAN: What I think struck so many of us also is the level of restraint. You look at what have been some tragic occurrences having to do with some police forces, and if you asked our guys what might have contributed to some of these incidents, it’s the level of training [of police officers] is not what it needs to be.

REDLICH: The downside of the never-ending war we’re in is, of course, the cost. But in terms of their training, this is again something I didn’t know until I’ve been living in this world, the story about coming into a house, everybody has an automatic weapon in Afghanistan, so the person who greets you at the door is going to come to the door, enemy or not, with a gun. Your ability to look at signs that are nonverbal and pick things up and not pull that trigger, these guys have now fifteen years of picking up on that. And that never occurred to me. But it’s like a professional athlete. How do you see [and differentiate] a curveball from a fastball? You just see enough of them, and you react, and because these guys have been doing it for so long, that’s how are engaging with people. And that’s fascinating. How do you show that on television? We’re going to figure out how to do that. That’s what we’re trying to get into.

TIMBERMAN: There’s a sequence in the pilot, again, completely choreographed by the guys who have lived through these things, but it’s training, it’s a shootout sequence, and this is what these guys go through in their training, that you’re basically blindfolded, or there’s a hood over your head, the hood comes off, and a different situation presents itself. And you have to respond immediately, and there are eight different people running at you, and it’s all a simulation, but some are armed, some are not armed, and when we were staging that scene, we said, “Wouldn’t there be marks on the walls from misfires in training?” And our guys said, “If you misfire in training, you’re gone.” They can’t afford those mistakes. They’re trained not to shoot at noncombatants.

REDLICH: Think about what that means. You’ve got to go through training. The training is famously, insanely difficult, just to become a SEAL. Then, after three or four deployments in combat as a SEAL, the best of you can then try to become this SEAL Team Six level, and that’s nine more months of training. That’s our Green Team. And it’s not just about how many jumps you can do, how long you can hold your breath, you have to swim X number of yards underwater, it’s also about tactical. [The SEAL team members] are smart, smart in a way that you don’t expect, because they’re tactically smart, and that’s been really fascinating. In other places, they’d be at colleges here and there. They chose a life in the military, and the military finds a way to find them and put them at this level.

TIMBERMAN: But instead of having a PhD in astrophysics, they’re on the ground doing [military operations]. The ones who make it to this level are so well-trained, and so smart, and have such sharp instincts and such a level of commitment that you almost can’t fathom it.