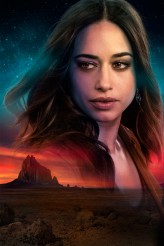 The actor talks being human among aliens 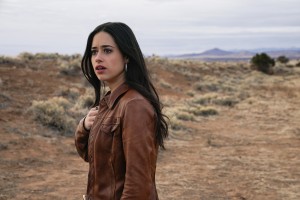 ROSWELL, NEW MEXICO is hurtling toward the end of its first season Tuesday nights on The CW (the season finale is April 23). The series, adapted by Carina Adly Mackenzie from Melinda Metz’s ROSWELL HIGH novels, concerns of trio of alien siblings who pass for humans in the title town.

One change from the book is that the characters are adults instead of teens. However, a return to the ROSWELL books (not true of the previous WB ROSWELL TV series) is that the aliens’ human ally Liz is Latina.

Jeanine Mason, also Latina, plays Liz Ortecho in the new series. Liz is a scientist, who was working on a cure for dementia before she got sidetracked by extraterrestrial issues. Good news: Liz has found out that alien boyfriend Max (Nathan Parsons), his sister Isobel (Lily Cowles) and their brother Michael (Michael Vlamis) were not involved in the murder of her sister Rosa (Amber Midthunder) ten years earlier. Bad news: there’s a fourth, evil alien in their midst who has turned out to be Isobel’s seemingly loving husband Noah (Karan Oberoi).

Mason, originally from Miami, Florida, has credits that include arcs on BUNHEADS, OF KINGS AND PROPHETS, and GREY’S ANATOMY.

At an event hosted by The CW for ROSWELL, NEW MEXICO – complete with crashed spaceship parts and egglike alien suspended animation pods – Mason talks about putting humanity into both her character and the series.

ASSIGNMENT X: Were you familiar with the WB ROSWELL series at all?

JEANINE MASON: I was with the property. My older sister loved it, watched it in the WB glory days. She was, “This is a perfect time to redo this show, everybody loves this show, they’re going to be so enthusiastic.” And sure enough, it’s been the most wonderful property to step into. Shiri Appleby and Jason Behr [stars of the early WB version] have been so lovely and supportive. Shiri directed for us, and the woman is, aside from being an incredible actor, she’s an amazing force, and such a boss woman, it’s inspiring to be around someone so wonderful.

AX: ROSWELL, NEW MEXICO could be described as star-crossed romance. Are you a fan of that genre?

MASON: Big fan. And I’m a big fan of small-town romance, or small-town shows, shows like GILMORE GIRLS, or FRIDAY NIGHT LIGHTS. And I think our show captures that. I think people are going to want to spend time with us in our tiny little town.

MASON: It probably feels more that way for me, because I’m in observation of it always, my character is being baffled by it always. So in that way, I love it, I love the challenge, and how deeply [the series is] playing with imagination of what these circumstances would feel like for Jeanine. Because that’s how they feel for Liz.

AX: Although Liz is human, and therefore doesn’t have alien powers, she interacts with a lot of powers around her. When Max saves Liz in the first episode, there’s a glowing handprint on her body where he bestows his healing touch. Was the handprint completely CGI, or was that makeup, or something else?

MASON: I do have a sort of stencil on me with these dots that give the CGI artists the template to see it move as my skin moves. But it’s pretty trippy. The first time I saw it, I thought, “Oh, my God, that’s such a great look, that iridescence, and it really looks like a matter we haven’t encountered yet.” That’s exciting, and I loved it. 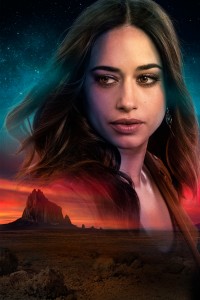 MASON: Yes. Pretty quickly, actually, she does, which was a challenge for us, because she is such a selfless, heroic character, she’s in the service of so much that’s beyond her. But her brain power, her ability when it comes to science is so great that it is her duty. So she feels very strongly connected to that, to the obligation to do what she can to make the world better. And the kind of science that she’s working in we explore pretty quickly, and I think it’s fascinating, and rivals the aliens in its capability for change.

AX: Did you do any research for Liz in terms of being a scientist?

MASON: Absolutely. I did a lot of research, and I have a couple of scientist friends, so that was a very lucky connection I have there. Obviously, a lot of it is beyond me [laughs], so it was getting to a point where I felt comfortable that I had a basic understanding of what it is she’s attempting to do. And the rest, I had to kind of raise my hands and go, “Okay, I think I can sell it.”

AX: How did you like working in New Mexico, where ROSWELL is shot?

MASON: Loved New Mexico. We all fell in love with it. I think it adds so much to our show that we got to shoot there. It informs every frame, and it’s the most colorful show, I think. In the dead of winter, I think people are going to want to spend time with us. We’re very lucky to shoot there. It’s in every frame.

MASON: I have an indie film called MADE PUBLIC that will be doing the film [festival] circuit this year. It actually just got into an Oscar-contending festival, so that was really exciting.

AX: What would you most like people to know about ROSWELL, NEW MEXICO?

MASON: I would like people to know that they are going to love spending time with us.