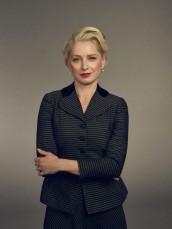 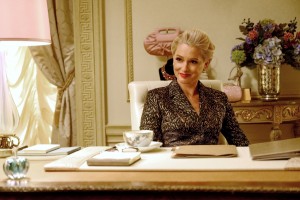 KATY KEENE, spun off from RIVERDALE (both of which are adapted from the Archie Comics series), is in its first season on Thursdays on The CW. Katy (Lucy Hale) is a young aspiring fashion designer in New York who works at the upscale Lacy’s department store. One of Katy’s bosses there is the imperious and demanding Gloria Grandbilt, played by Katherine LaNasa.

LaNasa, a former ballet dancer and choreographer in addition to being an actress, is originally from New Orleans. Her other series regular and arc credits include FUTURE MAN, The CW’s DYNASTY, IMPOSTERS, DEVIOUS MAIDS, SATISFACTION, LONGMIRE, DECEPTION, TWO AND A HALF MEN, BIG LOVE, 12 MILES OF BAD ROAD, JUSTICE, LOVE MONKEY, JUDGING AMY, MISS MATCH, and THE GUARDIAN.

At a Q&A session for KATY KEENE, LaNasa is asked if she finds it difficult playing a character as formidable as Gloria.

“No,” LaNasa replies. “I’m pretty good at playing those characters. I have certain family members that I draw from. I actually enjoy playing people that are tough on other people. It sounds really weird, but I feel like to play them with accuracy is almost a gift of compassion to the audience. It’s sort of like saying, ‘I understand how you feel at the hands of the person.’ To go further with that, just the dialogue itself, I think, was something that was just so attractive to me. I could feel the tone in the whole piece. And I love this sort of stylization of it, and I just found it so snappy and adorable. [During the audition process], I was really hoping I would get it.”

After the panel, LaNasa makes time for some follow-up discussion.

ASSIGNMENT X: Did you see the movie PHANTOM THREAD?

KATHERINE LaNASA: No. Should I?

AX: Lesley Manville was nominated for an Oscar for playing a character who runs a fashion house, whose manner is not unlike Gloria’s …

LaNASA: No, I didn’t take it from her. I just sort of took it from the page, to be honest with you. I didn’t even rewatch THE DEVIL WEARS PRADA, or anything like that. I just went in. I mean, there have been many iconic characters like Gloria Grandbilt, but I didn’t try to emulate them.

AX: Do you have any feeling of ownership of Gloria’s area of the department store? That is, as an actress, do you come on and go, “My set”?

LA NASA: [laughs] Oh, I don’t know about that. I definitely do try to bring a reality to it, so I think the more time you spend in a space, and the more you interact – there was a scene when I go in the back, and I was talking on the phone, and I was like, “Well, what should I do?” and I tuck in my phone, and I eat some of my jelly beans. So I do try to make it my own, so it feels like my own when the audience sees it. Sometimes it’s just those little things that add up.

AX: You were just talking with Zane Holtz, who plays Katy’s boxer boyfriend K.O. Is Gloria aware of K.O. in terms of his existence?

LaNASA: I did ask her in the pilot, “What about that bruiser you date?” In the comic books, I think Gloria wants K.O.

AX: And what would you most like people to know about KATY KEENE?

LaNASA: It is a deliciously fun, optimistic, inspiring show.