The actress chats about the speculative fiction drama series 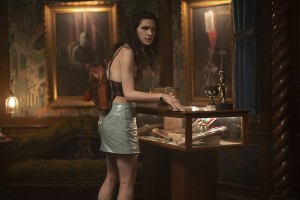 In AMC’s new Monday-night speculative-fiction drama DISPATCHES FROM ELSEWHERE, four strangers – played by Andre Benjamin, Sally Field, Eve Lindley, and series creator Jason Segel – come together to play what seems to be a game, but may be a gateway to another reality.

Lindley, whose previous credits include the films ALL WE HAD and OTHERHOOD and the series MR. ROBOT and OUTSIDERS, plays art gallery employee Simone. Simone is afraid of becoming to close to other people. However, she and Segel’s Peter are drawn together as they try to solve the peculiar mysteries that are presented to them.

At a Q&A session for DISPATCHES FROM ELSEWHERE, Segel, who is also an executive producer on the series, talks about casting Lindley. “Judd Apatow is my mentor, and I learned in my own many years that it’s all about the casting, and finding people with whom you can explore these scenes together. And you then end up adapting for the actual actor and actress that you cast. And so I was improvising with Eve, and she was doing this scene so much more nuanced than I had ever imagined it when I was writing it. And we finished the moment, and I turned to Eve and I said, ‘Gosh, she’s so much more complicated than I realized.’ And Eve looked up at me and said, ‘She always is, Jason’,” he laughs. “And essentially, in my mind, she was cast at that moment. I remember the way I felt when Russell Brand walked in to audition for FORGETTING SARAH MARSHALL [which Segel also wrote]. I had a sense that, ‘This changes everything.’ And that’s how I felt when I auditioned with Eve.”

For her part, Lindley says, “This cast has been amazing and so supportive and so kind, and I was really drawn to the role. I think that the story is unlike anything that I’ve seen on TV. I hadn’t really seen a trans woman be portrayed as a love interest, and lovable, and a full, well-rounded character. So I was really, really jazzed about it. And it was a fun audition process. 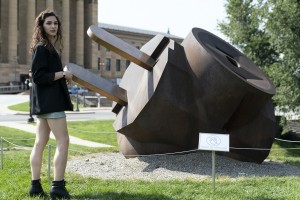 “I was just so excited. I was doing a lot of guest-star, recurring things. I was very grateful to be doing that, and coming on and leaving, and all that, disappearing into the night. And then I read it and I was so moved by the fact that it was one of the best depictions of a trans character that I had ever read. She felt so close to me and I felt like I knew her, and I felt like I could tell her story. And it was really great, because Jason allowed me to interject a lot of myself into her, and we really worked together to bring her to life.”

When the panel concludes, Lindley makes time for some one-on-one follow-up discussion.

ASSIGNMENT X: What is Simone’s attraction to the game – if it is a game – that she and Peter are playing in DISPATCHES FROM ELSEWHERE?

EVE LINDLEY: I think the game really allows her to be free, because she thinks it’s sort of fake. She thinks it’s a game. She doesn’t think it’s a government conspiracy. So she finds a lot of freedom that she doesn’t have in her everyday life, where she’s maybe a little more insecure moving through the world. In the game, she can be anything she wants to be.

AX: Is the game something you would want to do for real?

AX: Are you looking for that type of freedom, or do you have another reason you’d like to do it?

LINDLEY: I suppose. I mean, I just like games [laughs]. I just want to do something fun. 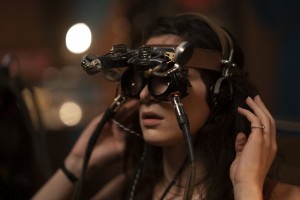 AX: Did you grow up watching HOW I MET YOUR MOTHER and thinking, “Someday I will play Jason Segel’s love interest”?

LINDLEY: No. I didn’t see it. I think my sisters watched it, but I sort of thought he was some indie movie darling. I had only seen him in FORGETTING SARAH MARSHALL and THE END OF THE TOUR, so I didn’t really have a great idea of quite how famous he was [laughs].

AX: How would you describe the chemistry between Simone and Peter?

AX: You are a transgender performer, playing a trans woman. Do you feel like there is a wave of trans acceptance, or at least a lot more acceptance of the trans experience, on television these days?

LINDLEY: Yeah. I think that there’s not just one story to be told about the trans experience, and so the more that it is normalized in all sorts of different types of shows, and maybe where it’s not the main focus of the show – like, her trans-ness is not really a main focus of the show. She’s just there, she’s just existing with these people.

AX: She transitioned, but that’s not the focus for Simone. It would be like if she went to Harvard before the show started, and that’s how she got the job she has, but the story’s not about going to Harvard.

LINDLEY: Yeah, I guess you could say that [laughs].

AX: Do you have input into Simone’s wardrobe?

LINDLEY: Yes. I had a lot of input. It was a collaboration between [costume designer] Keri Langerman and myself. I think Keri actually was the one who really gave her a look. Because emotionally, Simone is such a mess, I think initially she looked like a mess. And Keri sort of was like, “Maybe she doesn’t need to look crazy messy all the time. She doesn’t need to have messy hair and eyeliner and wear a hoodie. She could be well-dressed and still be messy.” [laughs]

AX: And what would you most like people to know about DISPATCHES FROM ELSEWHERE?

LINDLEY: I think they’re going to be excited to see everybody in a whole new light, and to go on this journey.

This interview was conducted during AMC’s portion of the Winter 2020 Television Critics Association (TCA) press tour.