The actor talks his character arc 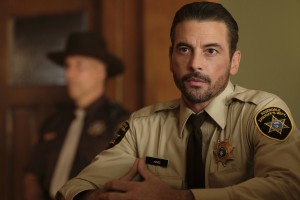 Adapted by Roberto Aguirre-Sacasa from the venerable ARCHIE Comics, RIVERDALE is now in its fourth season Wednesday nights on The CW.  This season devoted its opening episode to memorializing the character of Fred Andrews, Archie’s father, who had been played by Luke Perry. Perry died unexpectedly on March 19 of this year. He was mourned by his colleagues, who used the episode to honor Perry.

Unlike the wholesome characters of the comics, Archie (K.J. Apa) and his friends in the picturesque town of Riverdale are constantly solving murders, hooking up, and fending off gangs, cults and corruption. The scene is closer to BLUE VELVET than to GREASE

Skeet Ulrich, who plays FP Jones, father of Archie’s pal Jughead (Cole Sprouse), has certainly gone through his share of changes over the course of RIVERDALE thus far. The actor, originally from Virginia, costarred in the original SCREAM, then appeared in AS GOOD AS IT GETS and numerous other feature films. On television, Ulrich has starred in the series MIRACLES, JERICHO, and LAW & ORDER: LA, as well as the Emmy-nominated miniseries INTO THE WEST.

AX: Can you talk about FP Jones’s arc over the four seasons of RIVERDALE so far?

SKEET ULRICH: Well, the first three, I guess, were pretty extreme, from a ne’er-do-well, non-present parent, leader of a biker gang alcoholic, to somebody who’s trying to better his life and wound up being a sheriff [laughs].

AX: That’s pretty extreme. Can you compare him in any way to Jake Green, your JERICHO character, just because Jake started out as kind of …

ULRICH: Yeah, he was a ne’er-do-well who became heroic.

AX: And became sort of the sheriff …

ULRICH: Yeah, that’s true. That’s a great parallel. I was hanging out with James Remar [who is currently on The CW’s BLACK LIGHTNING], who was a part of that for awhile.

ULRICH: I liked what Roberto had to say about the arc of it through the first season. He didn’t know much beyond that at that point, but it sounded really intriguing to me. He told me about me being blamed for a murder I didn’t commit, but having to take the rap for my son. I thought it was intriguing. 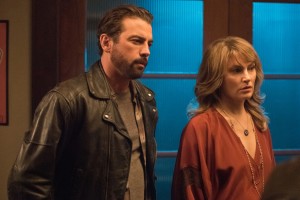 AX: Has RIVERDALE turned out to be what you expected, or has it turned out any different?

ULRICH: It’s very different. The first season was what he said it was, and then I didn’t know what the second would be. The third was a curveball. I don’t know. I kind of gave up expectations.

AX: Did you have to learn how to do anything in order to play FP at any point, like how to ride a motorcycle?

ULRICH: No, I knew how to do that. The only thing I really researched a lot was gangs, because I’ve dealt with gang issues before, and when I created the gang symbol for the Serpents, I made sure that no other gang had that symbol.

AX: You didn’t want to create an actual gang war with that symbol … 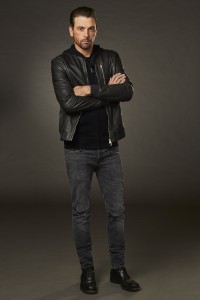 AX: And how is it playing the parent of a teen college person?

AX: Do you have a child of that age?

ULRICH: I do. I have twins that are eighteen.

ULRICH: I just did a Tom Hanks film called BIOS. It’s a post-apocalyptic film, there are five of us in it. And then I did Antoine Fuqua’s #FREERAYSHAWN, with Laurence Fishburne and Stephan James, which is the launch [TV series] for Quibi. It’s the first film to come out on Quibi.

AX: And what would you most like people to know about RIVERDALE Season 4? 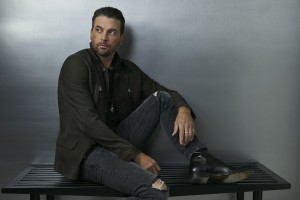