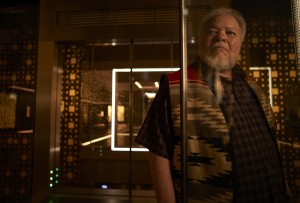 DEVS is a miniseries written and entirely directed by Alex Garland. All eight episodes are now streaming on FX on Hulu. DEVS concerns a mysterious tech company called Amaya. Amaya employee Lily (Sonoya Mizuno) rightly believes there is something suspicious about her boyfriend/co-worker Sergei’s (Karl Glusman) death. When Lily begins to investigate, she is on track to learn what it is that Amaya is actually doing.

Stephen McKinley Henderson plays Stewart, one of the key associates of Amaya founder Forest (Nick Offerman). Henderson, originally from Missouri, has an extensive stage and screen career that includes the films LINCOLN, MANCHESTER BY THE SEA, FENCES, and LADY BIRD. Henderson also plays Thufir Hawat in the new feature film version of DUNE.

At a Q&A panel for DEVS, Henderson what he told his friends about the miniseries’ complex storyline to friends. “I didn’t tell anyone,” Henderson replies. “It’s because I really want them to experience it the way that Alex unfolds the story. That’s one of the things that I concur with my fellow cast mates about, that when it was sequential, it was such wonderful discovery, and also about characters.

“A lot of my friends are very jaded, and they say, ‘I don’t watch a lot of television,’ or something like that. They’re nuts. But they say, ‘Because I always know where it’s going. I can always get it.’ And that ain’t happening here. So I did tell some friends, ‘I really want you to see this,’ because I really want them to see it, but I didn’t tell them any details, because the storyteller told it the best.” 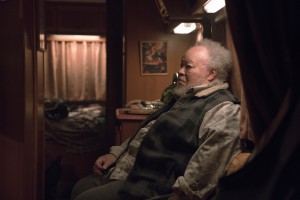 Much of DEVS is done practically, rather than with green-screen. How does that affect Henderson’s work as an actor? “It’s very analogous in terms of working on the project and working at the place, because as a character, you know you’re working on something very special and rare. And that’s how it felt working on the series. And you were aware of it in other ways, because the place was so special. Because of all the glass and stainless steel, there were people who were constantly cleaning the fingerprints away, cleaning the glass. I mean, it was really quite a prep before the scene. So you felt very special, and you also knew that you had to touch the right things. To really see the code there [on the screen], that was just amazing. But to see them come in and clean fingerprints, the cube was so well taken care of, it helped me feel special about the place we were working as a character and what we were doing. So it was quite helpful.”

Later that evening, Henderson discusses his work on DEVS further.

ASSIGNMENT X: You’re playing one of the most brilliant minds at the Amaya organization …

AX: Did you have to learn how to do anything in order to play Stewart?

HENDERSON: I read theory. I read the theory of quantum physics and that, but I didn’t have to actually [use the information]. When I’m at the computer, I’m working on some code, but, really, the text is so great. Everything that you need to know, Alex has written it there, and it unfolds in such a wonderful way that the text was the best research you could have.

AX: So you didn’t have to learn how to type really fast …

HENDERSON: Well, I already knew how to type fast. Not real fast – I mean, I can type with both hands, all fingers. I learned that in junior high.

AX: Did you have a favorite episode or scene?

HENDERSON: Yeah. It’s a wonderful friendship between my character and Cailee Spaeny’s character [Lyndon, who is male, played by Spaeny, who is female], and we have a scene where we’re playing with the big machine, and I just enjoy our relationship. She’s the youngest person there, and I’m the oldest, and we both enjoy what we’re doing, and feel like we’re part of something important. So it’s really all the stuff I have with Cailee. It’s a joy to be a part of that.

AX: DEVS poses some, let us say, moral conundrums. Did the show provoke questions in your own mind, or did you fall on one side or the other?

HENDERSON: Yes, but the same questions they provoke were the questions that studying theology provokes from you. When I was in college, I took theological-based courses. 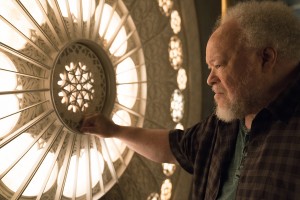 AX: Were you studying to be a religious leader?

HENDERSON: No, just studying the knowledge of God in all cultures.

AX: So just to be informed?

HENDERSON: Yes. And also, the great philosophy. Such great writers that were writing about the moral quandaries, and the moral issues. And so they come up with Devs, and especially if you’re working there – if you’re in that kind of work, you would be working for the government, or working for some company, and the day comes when something comes by your desk, and you don’t know [exactly what it means] – you’re putting this piece of the puzzle together, and then it goes on down the line, and somebody else does the other piece. But once you know what the full puzzle is, you’re in for some [self-questioning]. But it’s the same thing at a university, when you have a tenure case coming up, and somebody in the dean’s office says, “We have problems with this candidate.” And you know this is a wonderful professor, they do wonderful things, but somebody’s got a problem with something they did in the ‘60s. So the moral quandary is something we all can address. So I think when it comes up in DEVS, it’s applicable to regular, everyday life.

AX: Do you like having eight episodes and out, knowing where the whole thing is going, as opposed to an episodic TV series, where the direction of the project may change down the road?

HENDERSON: Oh, yes. Because you know the whole arc of your character, so you can work knowing where it’s going, and what Alex says – it’s like filming a novel instead of a short story, because even with episodic television, if you’re looking at the next season, you’re wondering, “What’s going to happen to my person?” But the thing is, it’s not so much the format, it’s this particular writer, and this particular story. But I do like the eight episodes and out, because you really do know what’s happening.

AX: In a way, is it like doing a play, where you go, “Okay, I don’t have to play this tentatively, because I know exactly where I wind up”?

HENDERSON: Absolutely. It’s similar to doing a play, but I can understand why a writer would prefer it.

HENDERSON: Well, I finished a wonderful film [BRUISED] that Halle Berry directed and stars in it, and I really had a great time. We wrapped December 22, so just in time for Christmas, so it was a joy.

AX: And what would you most like people to know about DEVS?

This interview was conducted at FX’s party for the Winter 2020 Television Critics Association (TCA) press tour.