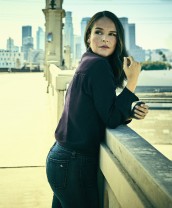 The actress talks playing a surgeon married to a sheriff 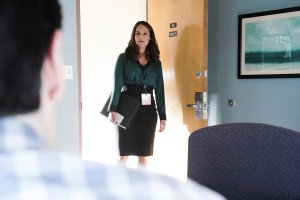 In Fox’s freshman Thursday-night drama DEPUTY, due to an arcane rule, Deputy Bill Hollister (Stephen Dorff), is unexpectedly promoted to Acting Sheriff of Los Angeles County. This has a ripple effect on everyone around him, especially Bill’s wife, trauma surgeon Paula Reyes, played by Yara Martinez.

Martinez, originally from Puerto Rico, played easily rattled Dr. Luisa Alver (the one who mistakenly artificially inseminates the heroine) over five seasons of the mostly comedic JANE THE VIRGIN. Martinez has also had recurring or regular roles on series including BULL, THE TICK (as Ms. Lint), I LOVE DICK, TRUE DETECTIVE, ALPHA HOUSE, THE LYING GAME, HOLLYWOOD HEIGHTS, BREAKOUT KINGS, SOUTHLAND, THE UNIT, and VANISHED.

ASSIGNMENT X: What is Paula’s relationship like with her husband Bill? Because in the opening episode, he’s in the hospital, arguing with her about triage. It seems like she wouldn’t try to tell him how to do his job as sheriff …

YARA MARTINEZ: Yeah, exactly. And why the hell is he telling her how to do hers? No, in that moment, it’s the pilot, so I think the stakes have to be really high. And I think she sets the tone when she tells him to get out. But they actually have a lot of respect for each other, and they support each other, and something that I appreciate is that, as much as Paula is there for Bill, and telling him to suck it up, he reminds her of her strength as she has to go up against the hospital politics. Because both of them, at the end of the day, they just want to save lives. And then they have to deal with this political aspect that just gets in the way of it. So they have each other’s back and encouragement throughout that, which is really great.

AX: What is Paula’s rank within the hospital? Is she a department chief?

AX: So Paula has been dealing a lot with hospital politics?

MARTINEZ: Yeah, she does. She deals a lot with hospital politics. She’s put in a really extreme situation because of budget cuts, and she has to make some really tough choices, and she gets put on the spot, but she wasn’t prepared for it. She just wants to do her job, and she just wants to make sure that people don’t lose their jobs, so you’re going to see her struggle with that.

AX: Obviously, all of the DEPUTY series regulars playing deputies got training for how to look realistic on the job. Did you go through separate training to play a surgeon?

MARTINEZ: Well, it’s funny, because when they were all talking about their training, I was in my apartment, sewing up a banana, because I was trying to learn how to sew up someone with the right utensils and not look like a complete fool. On set, I have someone that helps me a lot. She basically gave me a banana and the utensils, and she was like, “This is what you have to do.”

MARTINEZ: It’s actually sliced open, and I’m trying to sew the skin to the skin. All of them get to be out there, shooting guns, doing all this stuff, and I’m alone, watching YouTube videos, and sewing up a banana.

AX: Well, you could probably go from acting on DEPUTY to competing on PROJECT RUNWAY now …

MARTINEZ: You’re right. I can use this skill for a lot of other things.

AX: Besides learning how to sew bananas, did you learn anything else to play Paula?

MARTINEZ: I also saw some documentaries that [DEPUTY executive producer/director] David [Ayer] suggested. And I spoke to some nurses who assist surgeons, so they helped me a lot. But for me, actually, the research that I really like dove deeper into was speaking to [the wife of Jaime FitzSimons]. Jaime, one of the actors in the pilot, he’s actually a sheriff [in real life], and before that, he was an undercover cop. So I got to talk to his wife and learn in depth what it’s like to live with that type of fear, [of whether] my husband’s going to come home at night, and what that does to you on a daily basis, and also how affected you get when other people talk about law enforcement, and how protective you are about the enforcement. So that was something that helped me connect to the role.

AX: Has anything grossed you out with the surgery scenes?

MARTINEZ: You know what? Not at all. I thought it would, but no, it hasn’t.

AX: What changes for Paula because of Bill being made acting sheriff?

MARTINEZ: Episode 1:06 is a heavy Paula storyline, and she’s put in a really extreme situation, a life and death situation, and it’s directly because Bill is sheriff. And she suffers a little PTSD from that, and you see her trying to fight the balance between knowing that Bill is meant to do this job, and the power that can come with that job to do good, and the struggle of what’s actually right for her and for her family, and what they can actually live with.

AX: Paula and Bill also have a daughter …

MARTINEZ: Yes. We have a fourteen-year-old daughter, Maggie, played by Valeria Jauregui, and she’s amazing, and you see a lot of really beautiful moments between the three of us, but especially with Bill and Maggie. She brings out a really soft and sweet side to Bill that I think will make the audience care about more once he’s out there fighting crime, because the stakes will get higher, because you care about his family life. 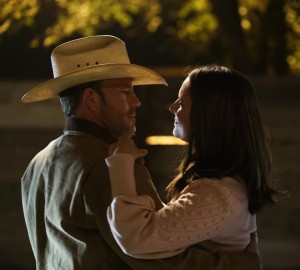 AX: Does that throw you at all?

MARTINEZ: Not really. Because for my character specifically, it’s pretty much all interiors, because I’m either in the hospital, primarily in the hospital, or the house, So it’s all interiors. The sets are so amazing, and our house, the set design is so amazing, it really feels like a Los Angeles home. So that doesn’t really throw me. And I’ve seen a few of the episodes, and they did an amazing job really showcasing Los Angeles.

AX: We see a lot of Bill’s work associates. Do we see any more of Paula’s?

MARTINEZ: Not as much as I would like. I’m happy that we meet Paula’s mom, and you see that family dynamic, so that’s a thing that I’m really happy with. And you see some people at her job, but not the way you see [Bill’s colleagues]. because the show is essentially about the sheriff and the deputies. It’s not called NURSES. So you don’t get as much. 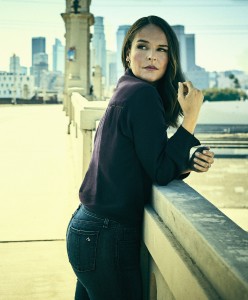 AX: Have you done any other roles that have helped you prepare for Paula in any way?

MARTINEZ: Not really. Luisa from JANE THE VIRGIN was a doctor, but that’s the only thing they have in common [laughs]. And she wasn’t a great doctor, so I can’t even compare it. No, this is the first of its kind.

MARTINEZ: To watch it on Thursday nights at 9 PM/8 Central on Fox.