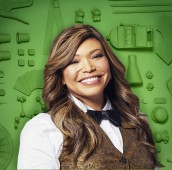 The actors talk the healing power of comedy 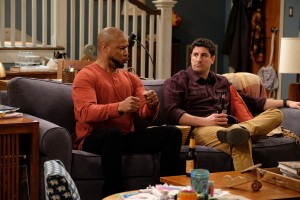 In Fox’s half-hour comedy OUTMATCHED, airing Thursdays in its first season, Tichina Campbell Martin plays Rita and Finesse Mitchell plays her husband Irwin. Rita is best friends with fellow casino worker Kate (Maggie Lawson), and Irwin is best friends with his construction renovation company partner Mike (Jason Biggs), who is married to Kate. Mike and Kate have four kids, three of whom are certified geniuses. This gives them a lot of parental issues that Rita and Irwin are happy not to have themselves.

Campbell-Martin, originally from Oklahoma, is known as a singer as well as an actress. She costarred in the feature film version of LITTLE SHOP OF HORRORS as part of the singing group providing commentary on the action. Other credits include the HOUSE PARTY film franchise, and regular or recurring roles on series including MARTIN, MY WIFE AND KIDS, EVERYBODY HATES CHRIS, RITA ROCKS, THE PROTECTOR, DR. KEN, EMPIRE, and LAST MAN STANDING.

Mitchell, born in Atlanta, Georgia, is a veteran of multiple seasons of SATURDAY NIGHT LIVE, 2003-2006. Mitchell’s feature film appearances include WHO’S YOUR CADDY?, ALWAYS WOODSTOCK, and BARELY LETHAL. He was a series regular on A.N.T. FARM and ROADIES.

Campbell-Martin and Mitchell are standing together. Although they’re not married to each other in real life, they do sometimes talk like a couple, adding to one another’s answers.

ASSIGNMENT X: Your character Rita works with Maggie Lawson’s character at the casino …

TISHA CAMPBELL-MARTIN: And we grew up together. 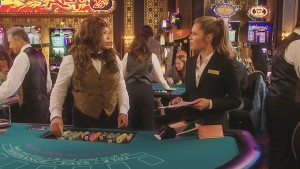 AX: Did you do any research into being a casino worker?

CAMPBELL-MARTIN: Well, once I got the role, yes, because I have to handle the cards. I’m a [card] dealer. And it’s hard to talk and deal at the same time [laughs], so yes.

AX: What can you say about Irwin?

FINESSE MITCHELL: I’m Rita’s husband on the show, and I play Jason’s best friend on the show. We have a construction, a flipping homes type of business. And I’m his sounding board for stuff that’s happening in his house. And then sometimes I bring comedy, sometimes I bring my weird sense of logic, but I’m also labeled as sort of a likable, not-so-smart guy.

CAMPBELL-MARTIN: I don’t agree with that last part.

CAMPBELL-MARTIN: I agree with the likable part.

AX: Did you have to learn anything about construction, or because OUTMATCHED is multi-cam, do we very seldom see you at work…?

CAMPBELL-MARTIN: Come on, you do it all, you can do it all.

MITCHELL: [joking] I do it all the time. I do perfect homes all the time, I flip homes in Atlanta … 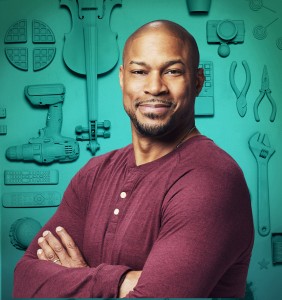 MITCHELL: Thank you very much. No, the fun thing about this show is just, I really just get to read the lines and be myself. The lines are so funny.

CAMPBELL-MARTIN: We are the support system for Maggie and Jason’s characters, and they’re finding more storylines with us together, the different parenting styles, and the difference in just trying to raise [children] and have relationships outside of family.

AX: Do your characters have kids?

CAMPBELL-MARTIN: Yes, we do. We haven’t met them yet. But we will.

AX: You as actors have not met the actors playing your kids? Are you looking forward to that?

AX: Have you done more multi-cam or single-cam before this?

CAMPBELL-MARTIN: Well, he was on SNL.

MITCHELL: Single-cam. I’ve only done SNL and Disney Channel as a multi-cam.

CAMPBELL-MARTIN: What was the show on Disney Channel? 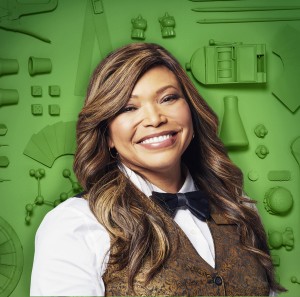 AX: Coming off of SNL, do you have a preference between doing a bunch of different characters in a week as you did there, or the same character, as in OUTMATCHED?

MITCHELL: The same character. The same schedule, and leaving at the same time.

MITCHELL: Multi-cam. OUTMATCHED, ANT FARM – I love the multi-cam format. It allows you to play in the moment. SNL is such a pressure cooker. You’ve got to get it right, you only get one time to do it, and it goes so quickly.

CAMPBELL-MARTIN: And for me, I’ve been doing sitcoms since the ‘90s, I couldn’t get arrested at first doing any comedy, because I was mostly the go-to drama girl. But doing so many, I love the sitcom format, because doing the sitcom format is like a healer. I have people coming up to me all the time, saying, “Your work in the ‘90s and your sitcoms made me laugh at a horrible time in my life.” And so I understand the power that sitcom has. It takes you outside yourself.

AX: As a singer, have you ever played a casino on the casino stage?

CAMPBELL-MARTIN: I just came off of doing SOUL TRAIN AWARDS. I co-hosted it with [LITTLE SHOP OF HORRORS costar] Tichina Arnold, and we co-hosted it in Las Vegas.

AX: Did that experience teach you anything at all useful for your OUTMATCHED role?

CAMPBELL-MARTIN: Not for this. I just love doing stuff in the moment, and that’s why I’m so glad that Finesse is playing my husband, and I’m playing his wife, because he’s so good at the spur of the moment stuff. When we got to read together for the first time, I was like, “Oh, my God, this is magical.” Because he brought out some comedy in me that wasn’t there with anybody else. So I’m glad to work with him.

MITCHELL: I agree with all of that. In the audition, I lit up the entire room, and Tisha walked away with a feeling of, “That’s my husband.” I can’t disagree with anything she just said.

AX: Were you guys aware of each other as performers prior to OUTMATCHED?

MITCHELL: Absolutely. I couldn’t even believe that I was reading to be her husband. She was already cast in the show. Just walking in the room, I’m glad that I got a chance not to go first, because it allowed me to calm down and then just play.

MITCHELL: Just the chemistry. Because I already kind of knew what she could do, and I already knew what I could do, but will it show up at the right time? And thank God that –

CAMPBELL-MARTIN: We compliment each other. The chemistry between all the cast members, we really do compliment one another.

AX: And what would you guys most like people to know about OUTMATCHED?

MITCHELL: It is a show that you can watch with your family, and you don’t need to have kids to sit and enjoy it, the humor is so smart. And it has an edge to it, so even if that’s what you’re looking for …

CAMPBELL-MARTIN: It’s very edgy. I like a good, edgy sitcom. I think that you have to be edgy these days in order to keep up.