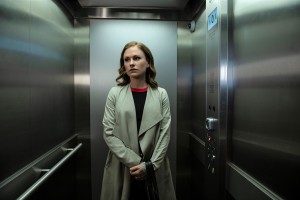 In Pop TV’s Thursday-night dark comedy FLACK, American publicist Robyn, played by Anna Paquin, moves with her sister to London and joins a British p.r. firm. She’s better at controlling the chaos of her clients’ lives than her own, and then there’s dealing with the other women in her office.

English writer Oliver Lansley (also an actor who has appeared in SHERLOCK) created FLACK. His other creations include the U.K. series FM and WHITES, and the telefilm ROTTERS.

ASSIGNMENT X: You originally wrote FLACK to be set in England. Then you rewrote it to be set in the U.S., and you finally revamped it again to be set in England with an American character at its center. Why did FLACK’s setting move around so much? Did you just feel it had a better chance of getting made in the States?

OLIVER LANSLEY: Well, originally, when we started developing it with [production company] CASM, they were at HBO, and the idea was, we thought it would make sense to maybe do it as an American show, but actually, what’s been really great is being able to dip into British and American celebrity culture, because they’re both similar, but they’re also very different, and there’s fun to be had with both.

AX: Your lead performer in FLACK, Anna Paquin, is one of the principals in CASM Films, and she’s one of your executive producers. Is it an advantage or a disadvantage to have a star who’s also one of your producers?

LANSLEY: I think it’s an advantage because, for a start, you know that one of your execs knows the show inside and out. With a show like this, where Robyn and Anna is in every scene – I’m sure Anna, just as an actress, would give above and beyond anyway, but certainly, she lived and breathed this show, and was involved in every element of it, and I think as a result, the whole process is really joined up, and you feel like you’re working towards a common goal together.

AX: Robyn’s colleague Eve, played by Lydia Wilson, has some fairly outrageous dialogue. Was Eve inspired at all by Peter Capaldi’s Malcolm Tucker character from THE THICK OF IT?

LANSLEY: Well, I mean, what a character Malcolm Tucker is. Not necessarily inspired by, but certain an homage, in some respects. She’s a little bit softer than Malcolm Tucker, but definitely, THE THICK OF IT is a great reference for me. That’s why I wanted to treat the syrupy world of celebrity, but with the robustness of a show like THE THICK OF IT, so it’s lovely that you got that reference.

AX: You also have three women in a professional hierarchy, so is Eve in any way an ALL ABOUT EVE reference?

LANSLEY: [laughs] Well, I love them all dearly, but EVE has got a very special place in my heart, so yeah, that’s another good one to pick up on.

AX: Why did you decide that all of the main characters in FLACK should be women?

LANSLEY: Originally, when I wrote this, I started work on this five years ago, when I think television, and I think women’s roles in television, had moved on a lot during that time. The conversation I had with our producer Mark [Talbot], I remember sitting with him, and there was a book that had just come out, called DIFFICULT MEN, about male characters and male show runners. And I said to him, “I want to write a character that can be on the cover of DIFFICULT WOMEN.” And I felt that, with a lot of female characters, we apologize for them, and we try and explain away in a way that we don’t tend to do with male characters. So I wanted a show that didn’t apologize and allowed all of these women to have their stories and just explore this world.

AX: Did you direct any of the FLACK episodes?

LANSLEY: No, I haven’t directed any of these episodes, actually. Not this season. Maybe next season.

AX: So FLACK could continue into another season?

LANSLEY: Who knows. Originally, it was conceived as this limited series [the first season is six episodes], but who knows. I definitely feel like there’s a lot more fun that could be had with the characters and the world.

AX: Given that FLACK is largely about the world of publicity, and we’re here at the Television Critics Association, aka TCA, press tour, which is a large publicity/press event, what do you make of this?

LANSLEY: Lots of fun. This is my first TCA. We don’t really do this in the U.K. We don’t do this sort of thing with these shows, so I’m having a great time.

LANSLEY: Yeah. I’ve got a new TV project that I’m just finishing up and going to be going out with soon. I run a theatre company as well, called Les Enfants Terrible, and we do big, immersive shows. We did an immersive ALICE IN WONDERLAND show that was in London, and so we’re doing a follow-up to that. We’re opening our own venue. So that’s going to be very big and exciting and will open in the U.K. later this year. Hopefully we’ll bring it over here at some point, over to the States. I’m going to be directing it.

LANSLEY: The thing is, we talk about it being very dark, but I think, I hope, it’s very funny as well. And there’s an element of seeing behind the curtain, which I think is really fun for people, but at the same time, it’s relatable human stories as well. So it’s stuff that hopefully people can relate to. And also, it’s men and women to watch. It’s not an exclusively female show, it’s not exclusively a show about celebrity culture. It’s about people, really.