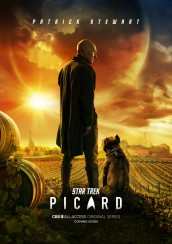 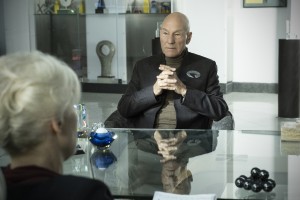 As everyone in the galaxy knows by now, CBS All-Access is launching the newest series in the STAR TREK universe, STAR TREK: PICARD. (The premiere date has since been announced as January 23.) Patrick Stewart reprises his role as Jean-Luc Picard, joined in supporting roles by fellow STAR TREK alumni Brent Spiner, Jeri Ryan, Jonathan Frakes, Jonathan Del Arco and Marina Sirtis, along with a pit bull (more about the dog in a bit). There will also be a third season of STAR TREK: DISCOVERY, featuring new regular David Ajala, six more segments of SHORT TREKS, and the new animated comedy STAR TREK: LOWER DECKS from RICK AND MORTY executive producer Mike McMahan. A STAR TREK: SECTION 31 series, about the Federation espionage department, featuring Michelle Yeoh as her DISCOVERY character Emperor Georgiou, is also in the works.

In non-STAR TREK news, CBS All-Access is in production on a new nine-part miniseries version of Stephen King’s novel THE STAND (which was originally made as a four-part ABC miniseries, now available on Blu-ray in 1994). King himself is scripting the final episode, an all-new epilogue to his story for the production.

INTERROGATION will be an interactive true-crime-based series for 2020, with audience members able to choose which interviews they want to see, and in what order. The show features Peter Sarsgaard, Kyle Gallner, and David Strathairn. THE MAN WHO FELL TO EARTH, the novel by Walter Tevis previously adapted as a feature starring David Bowie, is being developed as a CBS All-Access series.

This fall saw the premiere of Marc Cherry’s darkly comic WHY WOMEN KILL, and the returns of the police comedy series NO ACTIVITY and the thriller TELL ME A STORY. The legal drama THE GOOD FIGHT has been picked up for a fourth season. While she will not appear on it, Julianna Margulies, who starred in THE GOOD FIGHT’s CBS progenitor THE GOOD WIFE, has a development deal with CBS All-Access. 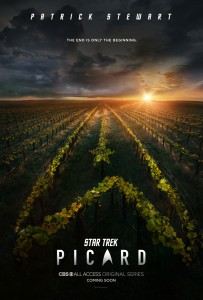 After the panel, McNamara answers some follow-up queries.

ASSIGNMENT X: Any timeline on when we might see STAR TREK: SECTION 31?

JULIE McNAMARA: Well, Michelle is in this season of DISCOVERY, so the SECTION 31 show would certainly be after that wraps. She could go into production. And the others, no timeline at this moment.

AX: Another STAR TREK: PICARD question. The dog is prominently featured in the advertising for the show. How much is the dog actually in STAR TREK: PICARD, and do you have any concerns about working with a dog?

McNAMARA: The dog has been great, and Patrick is a real animal lover, so I think he’s a nice friend on set, it’s a good relationship. And the dog is in it, but he prefers to stay close to home, I’ll put it that way, the dog.

AX: Do we know the dog’s name?

AX: Might you be doing any more animation besides LOWER DECKS?

McNAMARA: We would do more animation, yes, if we find the right thing.

AX: Is there anything else you can say about your deal with Julianna Margulies?

McNAMARA: It’s a development project, and it’s actually part of our development slate. We just don’t usually announce development, but just to illuminate the point that we have a good relationship with her, as far as we’re concerned, and so we’ll see what happens with that

AX: Whose idea was the epilogue for THE STAND? Was that something you asked of Stephen King, or something he offered?

McNAMARA: He and Josh Boone, who is the director/EP, have been working on how to bring THE STAND back to some version of either a movie, a series of movies, a series, for quite a while, and they have a strong relationship, and so when we decided to move forward with this version that Josh brought to us, it was already something that I think the seeds had been planted, and then Stephen feels he has been very present in our creative process, and his son Owen King is in our writers’ room, and I got that great call one day, that he wanted to do that, and we said, “Yes, please.” [laughs] 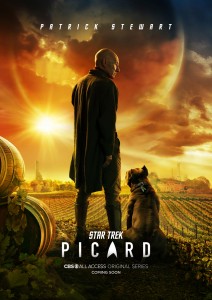 AX: Do you know how similar or dissimilar CBS All-Access’s THE STAND may be to the 1990s miniseries?

McNAMARA: I think there is some innovation that these executive producers have brought to it, but I won’t elaborate at this moment. Like with King’s other releases of the book [several different iterations of THE STAND have been published], it is set in the modern moment. And he did that throughout with the book releases – whenever it came out, it was set in that time, and we have done the same thing. So it does address modern technology in the face of this pandemic.

AX: Are you also using modern advancements in digital and visual effects to enhance some aspects of the storytelling?

McNAMARA: Oh, sure. The original mini was in the ‘90s, so ours will benefit from modern advancements, yes.