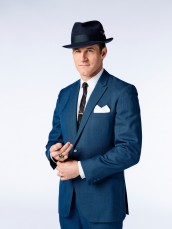 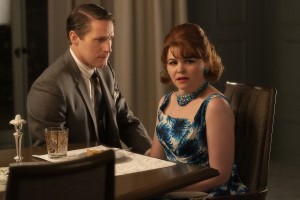 Sam Jaeger as Rob; Ginnifer Goodwin as Beth Ann in WHY WOMEN KILL – Season 1 – “I Found Out What The Secret To Murder Is: Friends. Best Friends.” | ©2019 CBS Interactive/Aaron Epstein

WHY WOMEN KILL, now streaming its entire first season on CBS All-Access, is a dark comedy/thriller created by DESPERATE HOUSEWIVES deviser Marc Cherry. Season 1 of WHY WOMEN KILL explores three different couples in three different time frames – the ‘60s, the ‘80s, and the present – who are linked together by the same house.

Originally from Ohio, Jaeger has been in Season 1 of CBS All-Access’s TELL ME A STORY, Detective Les Zoeller in the LAW & ORDER: TRUE CRIME miniseries, ABC’s miniseries WHEN WE RISE, a series regular on PARENTHOOD and ELI STONE, and had roles in features HART’S WAR, BLOOD WORK, LUCKY NUMBER SLEVIN, INHERENT VICE, and AMERICAN SNIPER.

“I’ll be up deep in the Sierra Madres,” Jaeger jokes.

Jaeger is seldom cast as the bad guy. Asked about his change-of-pace role in a change-of-pace era on a streaming channel, he replies, “I like being on a network that’s new. I think they’re wide open to Marc taking this show wherever he feels it needs to go, and that liberty is liberating for us as actors, because you don’t feel beholden to the beats of commercial breaks and so forth. And as far as playing a different character, for years I was trying to make Joel worse on PARENTHOOD, because I couldn’t live up to that, and I didn’t feel like our viewers could. And thankfully, Rob is not much to live up to,” he laughs. “He’s stuck in an era. But if that were just the template, if it were just a man who’s stuck in an era, it wouldn’t have the juice, the fun, the pep, the charisma of a Marc Cherry show. So that’s what drew me to it, because every show that Marc does has that wink where we celebrate not only the dialogue, but the characters are so rich and vibrant and …”

When the panel ends, Jaeger makes time for some follow-up discussion. 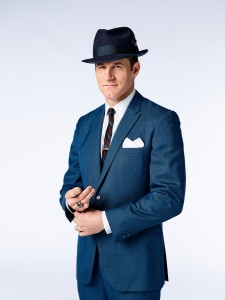 ASSIGNMENT X: Do you have to do anything differently vocally or physically, in terms of mannerisms, to play somebody who’s living in the ‘60s?

SAM JAEGER: Well, I chose to, because I didn’t quite know the tone of the ‘60s, and it is distinct from the modern day. And Marc wrote it with a specific tone. I had to get caught up to speed with the style of Marc’s writing, because I’d never done it. There are inflections, there’s more of a rhythm to it, and a song to it. But I’m also a huge fans of movies of that era, I’m an avid Hitchcock fan, and a Jimmy Stewart fan, and even a John Wayne fan, and trying to trace some of those voices into Rob was fun.

AX: There’s a height difference between you and Ginnifer Goodwin. You’re very tall, and she’s petite. Do you play with that height difference in the show, or do you just go with the director saying, “Tilt this way, so you’re not blocking her light”?

JAEGER: Well, I think it serves to underline the patriarchy, and how the pendulum swings so much in our story, where not only does Beth Ann find her voice, but she finds her strength, and it’s a strength that is far superior to whatever Rob has in stature.

AX: Does your storyline echo the classic film DIABOLIQUE at all?

JAEGER: Mmm. Maybe. Yes, that’s a good reference. There are certainly elements of it, although not quite to that extent. But what I find fascinating about our storyline is that not only does Marc Cherry write women so well, but he also writes women’s relationships with other women so well. And in ours, the most candid conversations happen with not only the woman that I’m having an affair with, but also our neighbor, who’s more progressive, but only progressive in relation to the 1960s, which today would seem very old-fashioned.

AX: In the ‘60s, a man having an affair could be seen as a status symbol of sorts, that he was affluent enough to afford the affair. Do you think there’s an element of that in what Rob is doing?

JAEGER: That’s true. It’s also indicative of that era. My grandfather had an affair that lasted for decades. And my grandmother was a wonderful woman that decided to endure it for the good of the family, and there was so much of that in that era.

JAEGER: I’m involved with THE POLITICIAN, Ryan Murphy’s show [on Netflix]. I don’t know if I can say what I do on it, but I’m really excited about doing that, and our storyline is, I think, built a lot toward the second season of THE POLITICIAN, which is a lot of fun. And working on [Season 3 of] THE HANDMAID’S TALE. That’s been an amazing show, a very resonant, relevant show with people.

AX: And what would you most like people to know about WHY WOMEN KILL?

JAEGER: Just that it’s fun. It has deep themes, but at the heart, not only does it have great performances and it’s beautifully shot, but it’s just so much fun. And I think we need this winking, smirking, diabolical voice back on television.