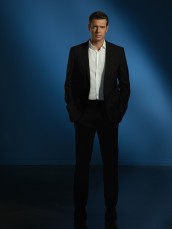 SCANDAL: Cast weighs in on the end of the series – interview

Scott Foley, Josh Malina and Jeff Perry discuss their emotions on the end as well as moving on to other projects 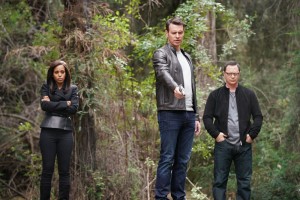 As creator Shonda Rhimes’s SCANDAL heads toward the finale of its seven-season run on Thursday nights, ABC opens up the show’s soundstages for the Winter 2018 Television Critics Association (TCA) press tour. Actors Scott Foley, Josh Malina, and Jeff Perry, who respectively play SCANDAL’s sometimes shady political operatives Jake Ballard, David Rosen, and Cyrus Beane, standing together within one of the White House sets, reflect on the end of an era.

ASSIGNMENT X: How do you feel going into the last season of SCANDAL? Are you relieved, are you sad …?

JEFF PERRY: I’m not relieved. I was shocked a little bit at the news, because it’s such a heavenly job, and I’m ready to go five years more. But at the same time, it was like, “Wow, this has been an amazing run, and that we have this beautiful notice of, “Okay, here are eighteen episodes. This is our senior year, let’s leave it all on the floor.”

AX: Given what’s going on in the real world, but do you feel like, “Man, we should have spotted this stuff,” or, “We’re not as crazy as what’s actually happening”?

PERRY: The big majority of us Americans were surprised. And then I think it very rightfully made us think, “Wait, why were we surprised?” Because it’s a large portion of people who said, “This ain’t working. This is not working for me.” And that’s why Trump was elected, it seems to me. And so, I’ll tell you one thing it leaves me with is, I have felt in my imagination a kind of polarity that this country may not have felt since the Civil War. That may be a naïve statement, because I’m of the generation that I am, but I’ve felt that for a long time, from George Bush Senior on. That’s a long time. And it does feel like we’ve got to figure out how to talk to each other – those who believe that government needs to do a lot, and those that believe that government needs to do almost nothing have got to get a little more toward a center and be able to find some common ground. Because this standoff is simply unhealthy.

AX: Are there things you’d like to see your character do before the wrap-up?

PERRY: I’ve been so happy to follow what I call the professional surprisers’ lead – Shonda and her amazing staff of writers. I’m not a writer, so I just wait with bated breath for the next script, and enjoy it. They’ve always taken us through change, and I know that will continue. We’ve gotten a big kick out of that at every table read for seven years. And so I’m sort of never surprised. 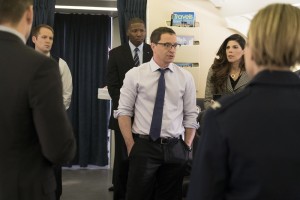 AX: Do you get told where the story might be going before it happens?

PERRY: We don’t have much advance about the arc. It’s just like, roll with the ocean and see where it’s going. And I love that, actually. To me, I kind of embrace that about television. There are ways in which it’s the most lifelike form, because no matter what your plans are, you can’t really tell what the next day is going to bring, whereas film, opera, theatre is usually a finite, closed story. [Journalist] Emily Nussbaum talked about the neon-lit, operatic world that Shonda created. And I only remember nice quotes [laughter], and the cast brought a groundedness that made that strangely possible, strangely plausible. So compared to today’s political reality, I go, “This is nothing.”

AX: Some of SCANDAL’s plot twists could be called outrageous. Do you ever contemplate how plausible something is or is not?

JOSH MALINA: I certainly do not read the scripts for any kind of plausibility. That’s their problem, not mine. Like Jeff says, our job is to play it for real and I also think he’s correct that reality has gone so topsy-turvy – I’m reading FIRE AND FURY, like everybody else, and weeding through the typos, I think they might be in a rush to get it out, read it once, but I gather that Trump considered I think having Jared Kushner as his v.p. [laughs]. The inanity of the Trump administration I feel gives us a big old stamp of, “You can do whatever you like, it’ll be plausible enough.”

AX: Did you have any guesses about what your characters would be doing in Season 7?

PERRY: Honestly, I didn’t. Because I long gave up looking ahead. We kind of knew that we would get the next glimpse at the first draft of a table read, and it would change some. We were just reminiscing – Joe Morton might have been one of the only [SCANDAL actors] who, for pragmatic reasons, was told way ahead, the rest of the cast was in darkness, that he was the father of Kerry [Washington]’s character. None of the rest of us knew that. So I’ve never been enticed by projecting ahead, just riding the roller-coaster that’s been plenty challenging.

SCOTT FOLEY: Yeah, I think we’ve learned not to hope, or to want, or to guess, because we will – if we’re right, it’s not any better than being wrong. The last thing you want to do is be right – “I think I might die.” There’s no good option. So no, I didn’t have any idea as to where my character would be after we ended the season last year, and I don’t know, had you sat me down and said, “Just take a guess,” that I could have. They are, to bounce off of what Josh said, there’s no rhyme or reason to the way it works here [laughs], but it does. And I’ve long ago learned to stay out of their way.

MALINA: I used to try to guess ahead, I was always wrong, and my biggest miss was when I was assuring Dan Bucatinsky at the end of an episode – there was an end of an episode where it looked like either James [Bucatinsky’s character] or David was about to be killed, and during an anxious week, I kept saying, “Dude, first of all, if anything looks like it’s going to happen, it’s not going to happen. I guarantee you, one of us gets winged, or someone else jumps in, and Jake is not able to take the shot, or there’s a deer we don’t realize is three hundred yards away.” I calmed him down for an entire week, and then I just got a text from him that said, “It’s me.” I wrote back – “Don’t you mean it’s I?” [laughs] And had that awkwardness. It turned out that, yes, he was going to die, and I was wrong, and I thought, “You know what? I’m going to give up the guessing game.”

AX: What are you going to miss most about the SCANDAL experience?

PERRY: Everything. I’ve loved this. I grew up with a little group of dysfunctional theatre geeks, straight out of a college theatre department. And it was heaven, because we made about seventy dollars a year, but did exactly what we wanted to do.

MALINA: Jeff co-founded [and is referring to] the Steppenwolf Theatre Company.

PERRY: Steppenwolf Theatre. And this, some forty-some years later, for me, it had more zeroes, and I’m very thankful and grateful for all of that with the paycheck, but a really similar luck into a really good chemistry, people who loved working and get a good kick out of each other, and it’s made coming to work blissful. So I hope I don’t miss that too much, because I’d love to work until I kind of fall over, and I hope other gigs will have much of that feeling. 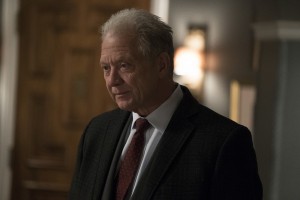 AX: A lot of SCANDAL personnel, especially Josh Malina, have had quite an impact on social media, interacting with fans …

MALINA: I’ve made lovely friends and enemies. And I appreciate the enemies who stick by me. I enjoy the bad perhaps slightly more than the good. I like sparring with people, I feel that Twitter is cathartic, and rather than argue with my children or my wife, I can argue with strangers about things of very little import, like plotlines on a television show and politics [laughs]. So yeah. I feel that what I’ve missed in theatre, which I haven’t done in quite awhile, you can make up for it a little bit in social media, which is not only to get feedback soon after something airs, but while it airs. Okay, we’ve had an awesome, involved fan base that I’ve thoroughly enjoyed interacting with for almost seven seasons.

AX: How do the rest of you feel about social media?

FOLEY: It’s not me. There are times when I might kill myself if I were Josh Malina.

FOLEY: I’ll give you a sound bite.

AX: Josh Malina, you’ve worked with both Aaron Sorkin on THE WEST WING and Shonda Rhimes on SCANDAL. Are those experiences opposite or similar?

MALINA: In my experience, they’re more similar than dissimilar. Whatever you think of their output, they both write hyper-literate, talkative characters, leading to scripts that are a little bit too long to shoot, and you’ve got to have your stuff ready at pace, or you don’t get the thing made, and I found that they both were very, very good bosses. They’re both clearly the boss on each show. Aaron was a very close friend of mine going into it, so that he maintained that with me, and I’ve always been struck by Shonda, who early on had meetings with us, and said things like, “If I can help in any way, if you’re buying a house …” I have gone to her largely with how much I’d like to continue working, and my availability dates [laughs].

PERRY: I’m anxious to create a project with my home theatre, Steppenwolf Theatre in Chicago, and we’re talking about different shows that could be in Chicago, Los Angeles, New York or some combination thereof, and sort of get back to my roots of theatre. And I’m also excited to explore the gigantic world of cable television fare and see if there’s a show that I could fit into.

PERRY: We’re going to give it our best, gladiators. And we hope you love it.

Article Source: Assignment X
Article: SCANDAL: Cast weighs in on the end of the series  – interview