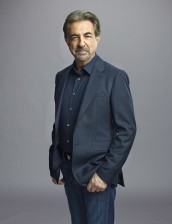 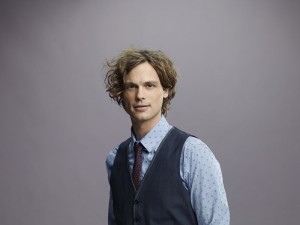 CRIMINAL MINDS is now in its thirteen season on Wednesday nights on CBS. Matthew Gray Gubler has been on the series since its inception as the brilliant but socially awkward F.B.I. Special Agent Dr. Spencer Reid. Joe Mantegna joined CRIMINAL MINDS in its third season as David Rossi, who left the Bureau to become a best-selling nonfiction author, only to return to the fold. The two men are enjoying supper together on an outdoor CBS lot, dressed to look like a 1930s street, in Studio City, but are up for discussing this season while they continue their meal.

ASSIGNMENT X: At the end of last season, there was a terrible car crash. It looked like maybe Kristen Vangsness’s computer whiz character Penelope Garcia was going to be running the department, because everybody else could be dead?

MATTHEW GRAY GUBLER: It was a one-woman show from this point forward. We’re here of her, though. It’s going to make big waves. We did a real audacious thing on CBS [laughs]. I wasn’t in the car, either, though.

AX: Seriously, Reid had quite an arc, where he was in jail, and then it turned out he’d been framed by a genius serial killer he’d encountered before, who was played by Aubrey Plaza. Did you know where that arc was going?

GUBLER: I think the writers did a really good job of sort of breaking nine or 10 episodes – they charted it out quite a while in advance, actually. They did a beautiful job.

AX: And were the returning actors people where you’d said, “We’d really like to work with these people again”? Aubrey Plaza –

JOE MANTEGNA: She can play a lesbian lover/murderer like nobody’s business.

AX: And Gia Mantegna had actually been on CRIMINAL MINDS ten years ago.

MANTEGNA: She had. I thought it was interesting that they decided to find out what happens with the daughter of a hit man, who when you last saw her was telling her father, “Kill him, Daddy,” which kind of flipped him [Spencer] out at the time. It took him three episodes to recover from that. 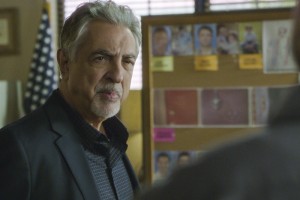 GUBLER: She’s very talented. She takes after someone in her family. She was a fan favorite, and we were so happy to have her back.

AX: And Jane Lynch came back as Spencer’s mother …

GUBLER: Oh, Jane, of course. After all of these years, all of us – Aubrey, Jane, Gia, all of the family in the show, we’re so honored to get to work with them.

AX: And you’re in Season 13 now. Do you have any thoughts about …

AX: Or just the fact that CRIMINAL MINDS has had such longevity?

GUBLER: A dream scenario. You get to work with people you actually love. We’re very fortunate to do that.

MANTEGNA: We’re at a good place. Daniel Henney is our new cast member, who was on the spinoff [CRIMINAL MINDS: BEYOND BORDERS] with Gary Sinise, and he’s doing a great job.

AX: Do you have any favorite episodes or scenes from the last couple of years?

GUBLER: I was very proud of all the prison stuff. I was very happy with that, and I felt very fortunate that the writers went out of their way to craft that story. That was great.

MANTEGNA: I like that we represent a real organization [the FBI’s Behavioral Analysis Unit], because in a way it keeps the reins in a little bit. We can’t get too crazy, because we represent a real group. And I think it’s good to have those kinds of boundaries in a way. We’re not some fantasy unit from Mars or something. Unlike every other thing on television or in the movies.

I especially enjoyed the shows that centered around my friend, the late Meshach Taylor [as Rossi’s friend Harrison Scott], because I’d wanted to bring him on the show anyway, because of what a great actor he was. He was able to do those first two episodes, and during the second episode, he was actually in the last stages of cancer, and when we did the third episode, it was his [character’s] burial. For me, it was a very special thing of art imitating life. I got to bury a character and I got to bury one of my closest friends in the world. And I got to direct two of the three of them. It was very special. He was a big fan of the show before that, before I even joined the show. So it all worked out.

GUBLER: He was such a talented actor. He did a great job. 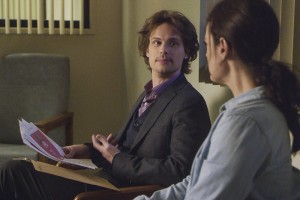 AX: You both direct on CRIMINAL MINDS. Do you know how many you’re directing this season?

GUBLER: I’m going to be directing one with [show runner] Erica Messer writing it. She wrote my first one, with Simon Mirren, “Moseley Lane,” and the one I did last year. I’m very excited about it.

MANTEGNA: I’m directing two. But I follow in Matthew’s footsteps. He’s really a great director. I was just watching a rerun a couple of nights ago that you did, and I didn’t realize you’d directed it until the credit came up, and I went, “Oh, wow, makes sense.”

GUBLER: When you work with great actors, it’s easy to look like a good director.

MANTEGNA: He really knows what he’s doing, so he gave me the confidence to give it a shot.

AX: What would you most like people to know about Season 13?

MANTEGNA: That we have one. That’s all [laughs]. I trust the writers to just do the job.

GUBLER: It’s another fast-paced season of thrills and spills with the BAU.