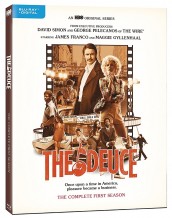 THE DEUCE: THE COMPLETE FIRST SEASON 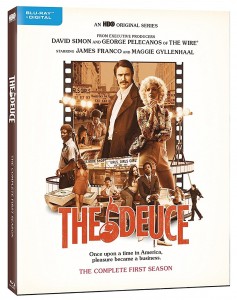 HBO is taking on some interesting projects in light of having only a few heavy hitters left in its arsenal and THE DEUCE won’t appeal to those that are expecting the next SOPRANOS or GAME OF THRONES or DEADWOOD or TRUE BLOOD but it is an interesting series that is a throwback to a time when New York City was at its sleaziest filled with peep shows, brothels and street walkers. The series follows a number of pimps, prostitutes, the mob and bar owners as they wade through changing laws and times in the 1970s. THE DEUCE does have going for a strong cast with James Franco playing twins, Maggie Gyllenhaal as a budding porn director/prostitute and many more. It is enjoyable but the amount of sleaze here will probably turn off many viewers. There are a number of featurettes, interviews and deleted scenes on the Blu-ray version. 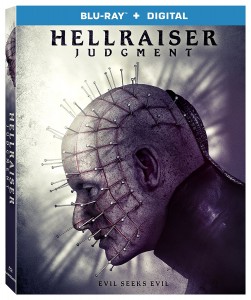 The HELLRAISER franchise has gone through its ups and downs over the years. The first films are deemed to be modern classics in the horror franchise but since that time, things have progressed at a mediocre rate with some films that are decent but nothing spectacular and the last few films deemed to be outright bad. JUDGEMENT comes at a time after the last film REVELATIONS was a disaster. The Cenobites are back and has a lot in common with the rest of the series while actually opening some new doors to future storylines or developments. Not saying this is the best since the first two films but it definitely gets the franchise back on track after some shaky waters. Also the cameo of Heather Langenkamp was a nice touch. Not much on the extras besides deleted scenes and a gag reel.

DRAG ME TO HELL: COLLECTOR’S EDITION 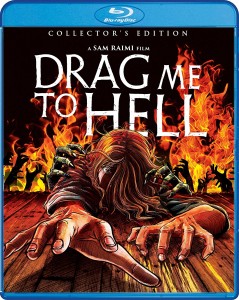 A have a soft spot for DRAG ME TO HELL as it is just so wildly over-the-top with some really great gross out scenes that will give anyone the willies. The story is pretty basic, a bank loan officer denies an old woman a loan to save her home and in return she curses her. Now both of them are pretty nasty to each other during the initial encounter but no one deserves what happens next. She is then tormented for the next several days as a demon from hell stalks her while she tries everything she can to lift the curse. Sam Raimi directed the flick and obviously from EVIL DEAD he knows exactly the gross out gags that get people riled and this has numerous scenes that just make you squirm. This is the latest from Scream Factory who did a new cut of the film including an unrated version included here but they also included new interviews with the star Allison Lohman and a host of other interviews and featurettes for fans to enjoy.