War on everyone Review 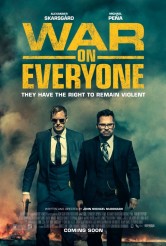 © 2017 Saban Films
WAR ON EVERYONE
Reviews

Movie Review: WAR ON EVERYONE

A misfire of an antihero buddy cop movie 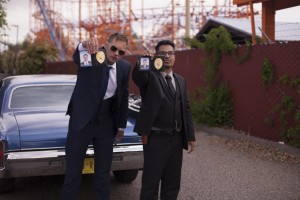 Apart from the fact that people have mobile phones and flat screen TVs, WAR ON EVERYONE could just about be set and have been made in the 1970s. It is written and directed by John Michael McDonagh, who also did the police black comedy THE GUARD and the (unseen by this reviewer) drama CALVARY.

In THE GUARD, McDonagh presented us with a larcenous but ultimately heroic small-town cop (Brendan Gleeson) in rural Ireland who took a lot of meant-to-be-funny racial potshots at a visiting FBI agent (Don Cheadle), but turned out to be noble in the end. In WAR ON EVERYONE, McDonagh moves the action to New Mexico and gives us two police detective partners, Terry Monroe (Alexander Skarsgard) and Bob Bolano (Michael Pena) who, per the title, are pretty much universally abrasive. They also have no problem with hitting suspects with cars, blackmailing local criminals and plotting to stage a million-dollar heist so they can get out of police work for good. The plan goes sideways, but Terry and Bob are determined.

It seems clear that Terry and Bob are meant to be entertaining antiheroes in the mold of Elmore Leonard (the movie version of OUT OF SIGHT is referenced in both clips and discussion). But everything about them is slightly off. Bob’s tough love with his two kids apparently is intended to show that he’s a manly dad, but it makes him seem borderline abusive. When Terry goes to question a suspect’s girlfriend (Tessa Thompson), it’s supposed to be mutual attraction, but it feels more like coercion at the start.

Then there are the bad guys, led by Theo James and Caleb Landry Jones, who really seem to be from the ‘70s. Jones’ character in particular seems a relic of the “he’s so awful he’s even sexually ambiguous” homophobia that was rife in the crime genre of that era. There are some attempts at showing that perhaps Terry and Bob may be a little out of touch, but WAR ON EVERYONE still wants to get laughs from their general abuse to anyone who isn’t like them. (There’s a moment with a female Chinese interpreter that’s appalling.)

All that aside, the plot ambles around. There’s no particular urgency to Terry and Bob’s mission and, until that unearned revelation, nothing that makes us feel much about the villains one way or another. Almost all of the characters are extremely literate – that’s a plus – but the movie isn’t stylized enough for us to accept that it’s all part of this world, so that we start wondering as to why there should be so many philosophers in this underworld. There’s also a matter of getting minor details wrong, like saying that an ex-con will be sent “back to Riker’s.” From New Mexico?

The dialogue and characterization actually sounds as though it was written for Irish and British characters, then transferred to the U.S. without much thought as to how it plays differently in a different culture. There’s no way of knowing for sure, but WAR ON EVERYONE might have worked much better if it were set in Ireland like McDonagh’s first two films (and which seems like it may have been the original intent).

Fans of Skarsgard and Pena get to see both actors handling their roles deftly and with gusto. Fans of Steven Soderbergh, Guy Ritchie, Paul Thomas Anderson and even the Coen Brothers can see what’s intended here, but WAR ON EVERYONE misses the mark.

Related: Movie Review: TRESPASS AGAINST US