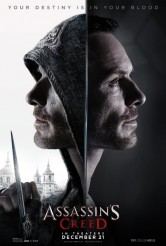 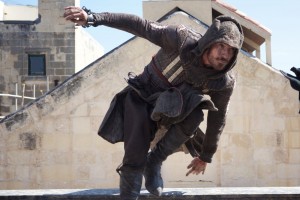 There are plenty of movies adapted from videogames. What makes ASSASSIN’S CREED notable among these is that it actively tries to look like a videogame, even though it’s got big-name actors and what appears to be impressive practical production value. (The film lists multiple locations, including Malta, Spain and the U.K. – no need to be globe-trotting if all of the settings are CGI.) This is its most striking, though far from only, mystery.

ASSASSIN’S CREED jumps back and forth in time between 1492 Spain and the present, with a brief prologue in 1986. Young Cal Lynch sees his mother (Essie Davis) dying, apparently at the hands of his father. Cal flees as the house is surrounded by black vehicles.

Thirty years later, we see that Cal (now played by Michael Fassbender) escaped that predicament, but he’s now a condemned prisoner about to be executed for murder. Cal accepts his fate, but after he undergoes lethal injection, he wakes to find himself alive and in an experimental facility in Spain.

Scientist Sofia Rikkin (Marion Cotillard) has perfected a machine, the Animus, that allows people like Cal to experience the memories of their ancestors. One of Cal’s ancestors was Aguilar (also played by Fassbender), a member of the Assassins. The Assassins are locked in eternal battle with the Templars. The Templars, as part of the Church, want to control humanity; the Assassins are in favor of free will. Sofia and her father (Jeremy Irons) are hoping that Cal, seeing what Aguilar sees, can lead them to a powerful artifact.

We feel some sympathy for Cal, as he’s subjected to a lot of brutal treatment. Since the Templars are burning people at the stake back in 1492, it’s also easy to understand why the Assassins are so opposed to the other group.

However, the narrative reason for the Rikkins to have essentially a private prison full of people with no back stories is elusive – Michael K. Williams has a lot of personality, but he can’t deliver more than the script allows. It may be that some of these characters will journey to different eras in possible sequels, but in ASSASSIN’S CREED, they just seem to be waiting around until the plot needs them to move.

We also don’t get much emotional connection to the 1492 sequences. We’re rooting for Aguilar, not so much because of his connection to Cal, but because he’s on the side not burning people to death. His enemies don’t get enough screen time for us to hate them, so when Aguilar overcomes them, we don’t get a rush.

Then there’s the artifact. We find out what it does, but not how it’s supposed to work. If ever a long exposition speech would be welcome, it’s in ASSASSIN’S CREED. Without getting too spoilery, we are given way too much time to wonder about such matters.

Fassbender and Cotillard give it their acting all. Charlotte Rampling and Brendan Gleeson both class up the joint with their presence. There is also some fun in watching Fassbender as Cal on the Animus, which looks like a big mechanical arm used in green-screen stunts.

Mostly, though, ASSASSIN’S CREED is one of those videogame adaptations that’s not enough of a movie in its own right to engage the imagination of film fans, and alas, not playable for adherents of the game.