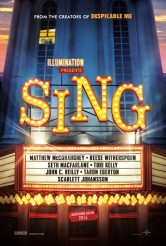 Given the amount of time it takes to make an animated film, it seems almost certain that SING was developed with no knowledge of ZOOTOPIA. However, both movies seem to be set in the same universe, where animals of all kinds live and work together, wearing clothes, driving cars, constructing buildings, etc., with no humans in sight. It is SING’s misfortune to be released later, by over half a year. While comparisons may be unfair, the two movies are so close that they’re impossible to avoid, and SING is the lesser of the pair.

SING concerns the efforts of one Buster Moon (voiced by Matthew McConaughey), a koala bear, to keep his theatre open. It is clear that at one time, this place was a grand palace of the arts, but since Buster has been producing flop plays there, it’s fallen on hard times. Buster’s solution is to stage a singing talent competition. Due to a typo, the prize money is considerably more than what the very broke Buster had in mind. Still, on with the show. Among the key contestants are Rosita (voiced by Reese Witherspoon), a married housepig with twenty-five kids,  a Sinatra-loving mouse named Mike (voiced by Seth McFarlane), indie-rock porcupine Ash (voiced by Scarlett Johansson), British mobster’s son Johnny (voiced by Taron Egerton) and shy elephant Meena (Tori Kelly).

The plot goes more or less the way we’d expect, and for two-thirds of the movie, it’s not much fun. Buster may be a koala, but even that doesn’t make most of his cash-scrabbling antics adorable (or exciting), with the exception of a genuinely funny car wash sequence.

However, when it comes time for the third act, SING develops a heart and soul. The singing is so good, the animation so charming and the sentiment so warm and inclusive that it provides genuine joy. This is even more impressive after viewers may have built up a strong resistance during the first two thirds.

Witherspoon, McFarlane, Johansson, Egerton and Kelly are all in fine voice here. Some famous music names pop up as well, notably including Jennifer Hudson as a superstar sheep.

The art concepts are pleasing and cute, and there are some original notes of razz-ma-tazz, but there are no big ideas here (and nothing approaching the memorable Minions of the DESPICABLE ME franchise, also made by this production company). There are pleasures to be found in SING. The question is how willing people are to sit through some tired sitcom plotting to get to it.