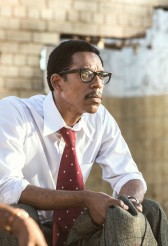 The actor talks playing Oliver Tambo on the BET series 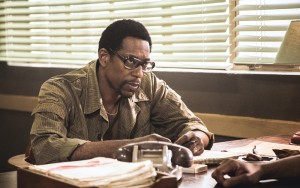 Orlando Jones has had a long and extremely varied career, encompassing film, TV and stage, drama, comedy and stand-up. He’s even played a few real people before, including Bobby Seale in the 2011 film THE CHICAGO 8. Now the actor from Alabama has tackled playing the late former African National Congress (ANC) president Oliver Tambo in MADIBA, the BET miniseries that rolls out in three two-hour blocks on successive Wednesdays, starting February 1.

“Madiba” is the Xhosa clan name often still used to refer to the late Nelson Mandela, the first post-apartheid President of South Africa, who had a law practice with Tambo. Laurence Fishburne plays Mandela in MADIBA, with David Harewood as fellow anti-apartheid activist Walter Sisulu.

Jones notes that MADIBA is a much more rounded portrait of Mandela’s life and times, as the miniseries shows the people around him and how all the pieces fit together, rather than simply presenting a portrait of uncomplicated heroism.

ASSIGNMENT X: How much did you know about Oliver Tambo before embarking on MADIBA?

ORLANDO JONES: Probably too much. I was Secretary General at the Model A.U. in 1994. Every year, they do a model organization of African Unity in the same way that people do a Model U.N. So during my college years, I first went as the head of the Economic Commission for the ANC, and that year, they elected me Secretary General, so I presided over the entire Model A.U. the second year I was there. So having been an ANC Economic Commission member the previous year [laughs], and having been participating in the O.A.U., it makes you acutely aware of Tambo and his work at the U.N., and what transpired.

AX: Is there somebody playing Oliver Tambo as a younger person as well, or is only Mandela shown as a boy/adolescent?

JONES: No. For me, there is just me throughout. We cover them from really right about the time they started their law practice together. You meet them when Oliver introduces Nelson to Walter Sisulu at one of the early ANC Youth Group rallies. And I play him ‘til he dies, so throughout his life.

AX: Can you delineate what the philosophical differences between Mandela, Tambo and Sisulu were?

Oliver was a deeply Christian man, and he truly believed that the role of Christianity was to stand [against] intolerance and oppression and repression, and violence was a very difficult turn to him, so much so that he made Nelson come to England to explain [that the ANC might use violence] to his wife Adelaide, because he could not participate in that campaign unless his entire family was with him. I think for Walter Sisulu, he had a very close relationship with his wife Albertina. His family stayed together and in a little bit closer configuration than Nelson’s did, but he also went to prison with Nelson, so the fact that Oliver was out of prison and Nelson and Walter were [in prison] obviously changed those relationships dramatically.

AX: Did Oliver feel guilt about not being in prison while Mandela and Sisulu were there?

JONES: I don’t know that he felt guilt. I think one of the most interesting things about looking at this story that isn’t often mentioned is that, at some point, they had to sit down and, with a lot of foresight, decide, “They’re going to ban the ANC, they’re going to arrest us, which one goes to London? Who is that?” They made that choice, and they made that choice looking down a fifty- to seventy-five-year road. That is truly long-term thinking, when you think about how that decision was made, who they chose to go there. And I think Oliver understood his role was to get his comrades out of prison, and to ultimately dismantle apartheid, and he succeeded at that role quite well, and died and handed the choice to Nelson to become president after Nelson was an institutionalized prisoner coming out of Robben Island.

AX: So had Oliver Tambo not died, he might have become the President of South Africa?

JONES: Well, Oliver Tambo was the president of the ANC and would have been the first President of South Africa who was black, except he was dying and he did die, and he handed that burden to Nelson, and it was not a burden that Nelson wanted. Nelson had been in prison for thirty years, was very much institutionalized, and at the very last minute, he finds out that his best friend is dying, and, oh, guess what, now you’ve got to go run the country. That was an incredibly difficult role for Nelson to step into, and it’s an incredibly important part of this story that people overlook when they go, “Yay, Nelson Mandela,” and realize that what you’re cheering for isn’t exactly what you think you’re cheering for.

AX: Well, the conventional portrait is that Mandela was entirely nonviolent, but MADIBA shows him with a gun at one point …

AX: Would you say that this depiction of Mandela has some lessons about how progressive activists can operate together in a functional manner?

JONES: I think it has lessons about how the left and the right and people in general can operate, because one of the key elements in this portrait is, there’s a scene where Nelson’s in prison in Robben Island, and obviously, they’re enduring a fairly racist individual who is looking to make them know that they’re “boys” and they’re not in charge in that particular race war. And what Nelson says to Walter Sisulu is, “Let’s treat him with respect.” And Govan Mbeki says, “Why? Why would we treat this horrible human being with any level of respect?” And he [Mandela] says, “Because if we begin by treating him with respect, and not adopting his behavior, then he will eventually treat us with respect.” And that eventually transpired over the course of his being in prison. That’s a lesson that, no matter where you’re from, no matter which side of the canvas you come from, it’s an important one to take in, and I think it’s center in this story.

AX: When did you come into this project? Was it after or before Laurence Fishburne was involved?

JONES: It was after. Laurence was actually the person who called me and told me about the project. He told me he was playing Nelson Mandela, and that he knew about my relationship with South Africa, and said, “Take a look at Oliver Tambo, and tell me what you think.” I was like, “I don’t have to take a look – it’s Oliver Tambo, are you kidding me?” [laughs] So I leapt at it and I just feel so grateful to have had the opportunity to play such a tremendous human being.

AX: How many years does your role span?

JONES: I play him over the course of about fifty years.

AX: Do you enjoy playing the age range?

JONES: I did, very much. Particularly some of the later stuff. I play him through his seventies and eighties, and he dies on camera in this piece.

JONES: It was really heart failure. Old age, the stress of the struggle and all the other madness that it came with, it’s exciting to play somebody over the course of their life, but it’s also very daunting, particularly someone whose health is failing them, and how that becomes a character in the story, almost. He holds it together for quite some time, but it deteriorated very quickly at the end, and suddenly he was gone. I really wanted to try and capture somebody who fought well for so long, and then just lost it so quickly.

JONES: AMERICAN GODS is obviously coming up [as a series on Starz]. I’m Mr. Nancy – Anansi, as it were – and [the feature film] BOOK OF LOVE, with Jason Sudeikis and Maisie Williams, Mary Steenburgen, Paul Reiser. So a wonderful film, great cast, we had a lovely time doing it. My Comedy Central special is right after AMERICAN GODS, so that’s the lay of the land.

AX: And what would you most like people to know about MADIBA?

JONES: That the true story of struggle is one that everyone took part in changing, that it’s a colorless story, it’s a sexless story, it’s an ageless story. And I hope that, as we all battle for human rights for others today, that we remember that our comrades don’t come in all the forms they think we do.

This interview was conducted during BET’s portion of the Television Critics Association [TCA] January 2017 press tour at the Pasadena Langham Huntington Hotel.

TV Review: SUPERNATURAL - Season 6 - “The Man Who Knew Too Much” – Sea...
CD Review: THE MUPPETS soundtrack
Blu-ray and DVD Picks of the Week Including GAME OF THRONES: THE COMPL...
BOSCH: Amy Aquino on playing Captain in Season 4 - Exclusive Interview