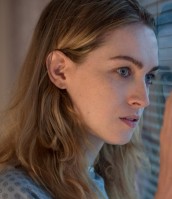 The actress talks her complex character 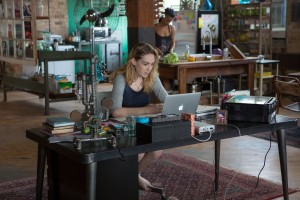 SENSE8 is now shooting its second season, which will premiere in December; Season 1 is available in its entirety on Netflix. The Wachowski siblings, Lilly and Lana, and J. Michael Straczynski, all executive producers on the series, created the unusual premise. SENSE8 gives us eight very different people from all over the world – San Francisco, Chicago, Korea, India, Mexico, Africa, Iceland, Germany – born at exactly the same moment, discover that they can all access each other’s thoughts and abilities. The series shoots on location for each character.

Clayton, who, like her character Nomi, is transgender, previously appeared in TRANSFORM ME, HBO’s HUNG and DIRTY WORK. The actress from San Diego, California, is currently on the big screen in NEON DEMON.

Clayton says it’s hard to quantify her joy that, although Nomi is transgender, her story is not about her transition, but rather about the fact that she’s part of the Sense8 group and that she’s a hacker.

JAMIE CLAYTON: I’m thrilled. Beyond words, I’m thrilled. I’m honored. I’m so pleased. I’m so happy. What are more words like this? [laughs] The amazing thing about that, too, is what I’m hearing from a lot of fans and from a lot of people that I’m meeting is how pleased they were. There has never been a trans character in a movie or on a show before whose story did not revolve around transition. Nomi is the first. Her story has nothing to do with the fact that she’s trans. She just is living her life, and she’s in love, and she has a job, and she’s a whole, complete person who is then thrust into this amazing cluster. And no one cares, because at the end of the day, we shouldn’t care that she’s trans. It doesn’t matter. She’s a human being. Whoo!

For me, it was a really special opportunity, because it’s never been done before with a trans character, as far as being written and directed by a trans woman [Lana Wachowski was already a trans woman during the making of SENSE8 Season 1; since then, Andy Wachowski has since transitioned to Lilly Wachowski]. So I knew, going into the project, that I would be protected and represented in a way that trans people have never been represented before on television. The experience was overwhelmingly positive, and I’ve never felt as safe on set. I trusted the Ws [the Wachowskis] and JMS [Straczynski] and everyone explicitly. I was willing to do anything that they wanted me to do. And I love Nomi. I love the character. I think that she really represents something that we haven’t seen before. It’s empathy. And these people come together to help each other, and it doesn’t matter that they don’t speak the same language, look like each other, it doesn’t matter their gender or their sexuality. It’s empathy. So for me, I knew in my gut going into this that if I was ever going to have an opportunity this big in Hollywood, that it was going to be Lana that was going to do it. And man, she frickin’ did it.

AX: How did you get involved in this project? Was the role of Nomi offered to you, or did you have to fight for it?

AX: Were you a computer person before all of this, or did you have to work to look like a convincing hacker?

CLAYTON: I had to learn – and I’m glad that you said I look convincing [laughs].

AX: How much of Nomi’s style is you and how much is the wardrobe design? Do you just give over to the costumes, or do you make any suggestions?

CLAYTON: Oh, no. Lindsay Pugh is our costume designer, and she was absolutely incredible. Everything was here, it was all Lindsay.

AX: Nomi and Amanita, played by Freema Agyeman, have some pretty intense sex scenes. How were those to do?

CLAYTON: We’re both professionals and we did everything that we had to do, so I hope that everyone enjoyed it [laughs].

AX: Did you have any questions about the mythology of SENSE8 – the way the members of the cluster work with each other when they’re taking on each other’s abilities, when they appear to each other and so on?

CLAYTON: Well, as we were filming, if anybody had any questions, the Ws were always there, JMS was there, someone was always there to answer a question if we did. I remember one instance where I was exhausted, and I think I was in Iceland – because I had been shooting straight through, like San Francisco, Chicago, and I remember walking onto set one day and saying, “Where am I supposed to be?” And there was always an answer. For any question anyone had, there was always an answer.

AX: Because most of the actors move to all of the cities where the action takes place, but not everyone is in all of the scenes, do you get to go out and explore when you’re not filming?

CLAYTON: Yeah. We were all together in the beginning in San Francisco for about two weeks. And then I started filming first. And so as I was working, they were all playing. [laughs] But then as we would travel, everyone got time off in whoever’s city it was. So when we moved on to Chicago, it was Brian [J. Smith]’s turn. So he was working every day, and the rest of us would have an opportunity to bond and get to know each other. We were traveling all over the world, and so there were moments where we all got to know each other and explore the cities.

AX: Do you have a favorite location that you got to visit?

CLAYTON: Iceland. It was amazing.

AX: Have you heard from SENSE8 fans, and if so, what have they been saying to you?

AX: When Season 1 was finished shooting, did you have to take a long break?

CLAYTON: I slept for about a month. Literally. I just went to bed.

AX: What are your hopes for Nomi in Season 2?

CLAYTON: That’s completely up to JMS and the Ws. As an actor, I will do anything that they ask me to do.