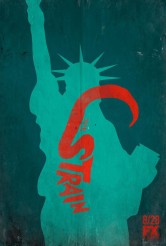 The executive producer./show runner talks changes from the novels 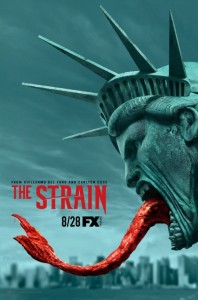 Carlton Cuse (LOST, BATES MOTEL, COLONY) is an executive producer and show runner on THE STRAIN. The FX Network series, now in its third season on Sunday nights, is based on a trilogy of books by Guillermo Del Toro and Chuck Hogan, about a vampire apocalypse that begins in New York City. Both Del Toro and Hogan are also executive producers on the show, with Del Toro directing some episodes and Hogan writing and serving as show runner alongside Cuse.

Season 3 picks up on Day 23 of the emergency, with elite troops trying to eradicate the voracious strigoi, which are under the telepathic control of the Master. Viewers familiar with the books may have been especially surprised at the end of Season 2, which saw Dr. Nora Martinez (Mia Maestro) kill herself rather than turn, as in the STRAIN novels, she’s a survivor.

There is definitely an endgame for the STRAIN series, Cuse says, and it is likely to go five seasons in all. The ending in the books seems like it would be difficult to dramatize as written. Cuse addresses this, Nora’s death, other changes – and the fact that he’s made his directorial debut this season on THE STRAIN.

CARLTON CUSE: I think as Chuck, as the co-author of the books, said before, he and Guillermo and I have all walked hand in hand to make the decision to diverge from the books. The books exist, and they are their own thing, and the television show is its own thing. And we really felt like our goal was not to do exactly what’s in the books, but to set these characters in motion in concert with all of our other collaborators. Chuck and Guillermo and I talk all the time about this, and we set this thing in motion, and we are basically looking to tell the best version of the story without feeling like the books are an impediment. The books are a resource, but we didn’t see there was any benefit in slavishly following the narrative of the books. They exist in their own form. And so, collaboratively, we’ve all decided that the TV show should very much be its own thing. So I think there are definitely many elements of the books that would be included as we march toward the ending of the show, but the way in which it plays out will be significantly different.

ASSIGNMENT X: You’re going to be directing an episode of THE STRAIN this season. Which one is it?

CARLTON CUSE: It’s the season finale. No pressure. It was a huge deal, but I also feel like if you don’t challenge yourself, if you don’t do things that make you a little scared, then you’re not [living fully] – that’s a part of life. I think that’s what’s good. You should always be pushing yourself out to a place where you feel at least a little bit about doing something, and I think out of that comes good work, comes things that are really meaningful, so that’s what I tried to do.

AX: This is the first time you’ve directed. Why now?

CUSE: It finally felt like it was time to have that experience. I’d resisted it, because I felt like, as a show runner, I was able to make all of the creative decisions that I wanted to make. But then there just came this point at which I really felt like it was an important experience to have, and I just felt like THE STRAIN was the perfect environment. I love the cast, the show’s really visual, it’s a really challenging episode, when you see it – I really can’t say too much about it, but there’s some stuff that goes on that was so cool that I was, “Oh, I have to direct that.” And it was just this impulse that finally struck me, and it was a real learning experience for me, despite having sat at the right hand of directors for over four hundred hours of television. I really felt like I had a different respect, I learned a lot, I think it will help me going forward in my relationship with prepping other directors, as well as just my general knowledge of being a filmmaker. One of my favorite quotes is from Akira Kurosawa who, when he was in his late seventies and making RAN, was like, “I’ve just started to figure out how to make movies.” And I feel like the process for me is all about learning and trying to get better and to improve my craft and know more, and that was part of the journey for me, was to actually direct.

AX: Did Guillermo Del Toro give you any tips?

CUSE: [laughs] Guillermo was super-supportive. It was really fun, I talked to a bunch of different directors. Michelle MacLaren was like, “Get used to standing a lot.” Plus she had a lot of other really good pointers for me – she’s a friend and was very helpful. Greg Yaitanes, who was the producing director on HOUSE, as well as BANSHEE, was helpful, Guillermo was helpful. It was great to see directors who I’d worked with help me understand what some of the things were going to be in the transition, and I really loved the experience.

AX: Did the people on the crew know who you were, or was the key grip going, “Who’s this new guy …?

CUSE: They knew who I was, but it was an entirely different relationship with the crew, because I’m not a real set rat as a show runner. I don’t spend a lot of time on set. So to go from casually visiting to being there fourteen hours a day was a transition that was really lovely, with the actors especially, to have the experience to really work with them, to help shape a performance. And for them, they really loved the fact that I was coming in as an authority figure, as opposed to visiting directors who go from show to show, and they don’t know as much about the show as the actors do. So they were like, “Gosh, it’s so great to actually work with you, because you actually know our characters, you know the context for everything that’s happening here.” And just for me to work with this group of actors – Corey [Stoll] and Kevin [Durand] and Miguel [Gomez] and Natalie [Brown] – they’re all just so talented and wonderful, it was great

AX: Do you have the itch to direct again?

CUSE: I do have the itch to direct again. It’s not something that I think will overtake my life. I don’t feel like, “Oh, I suddenly just want to be a director.” But being able to have it in my repertoire – yeah, I definitely plan to do it going forward.

AX: Can you talk about the JACK RYAN series that you and Graham Roland are doing for Amazon?

CUSE: We have John Krasinski cast as Jack Ryan, we’re working on the scripts and I’m just super-excited about it. I think it’s going to be a really, really cool show. We’re very excited.

AX: Can you talk about the casting of John Krasinski?

CUSE: I mean, who better? To me, I think what I love about John Krasinski is that, first of all, there was a high degree of difficulty when I took this project on with Graham Roland. I said, “Here’s the risk. We’ll work on this script, but if we don’t get the right guy, there’s no reason to make this show. If you don’t get a great guy to be Jack Ryan, you can’t make it.” And Krasinski was the first guy that really came into our minds. We had seen him in 13 HOURS and he got all jacked up for that movie, he looks fantastic. The character needs to be cerebral and also physical and then John has the extra added benefit of being funny, and that’s something that I think has not really been fully realized in the other incarnations of the characters. It would be I think a waste of John’s talents as an actor to not take advantage of the fact that he is a funny, charming guy, as part of the way in which we make that character our own for this iteration of the show.

So that seemed like a really great opportunity, was to bring his particular brand of humor to this iteration of Jack Ryan.

AX: Back to THE STRAIN, there was a very sexual element to the way Eichhorst, played by Richard Sammel, attempted to kill Dutch, played by Ruta Gedmintas. Was that to show that Eichhorst, as a vampire, had idiosyncratic desires, or …?

CUSE: Yeah, it was. Obviously, sexual impulse is completely perverted by this parasitic strain. As we saw in the first season of the show, Bolivar’s penis falls off [once he becomes a vampire]. So how does desire manifest itself in characters who are sexless? And so that’s what we were interested in exploring, which was how could Eichorst, being a sentient creature, have these sort of desires, but how would they manifest, how would they play out? It just felt like an interesting story avenue to explore.

AX: Given that you were directing it, did you worry or think about the last shot of the season finale more than you normally would?

CUSE: Oh, it was really incredible, because directing the show, I started thinking visually – I remember waking up the second night of prep and realizing, “Oh, my God, my writer brain is transferring into a director’s brain as I’m thinking through the puzzle of how I was going to take these scenes that Chuck [Hogan] and I wrote for the finale and visually realize them.” And that was almost like, people talk about how they learn a foreign language and they start dreaming in Spanish or whatever. I started dreaming in director, and that was a really cool experience.

This interview was conducted during FX Network’s portion of the summer 2016 Television Critics Association press tour.