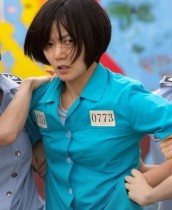 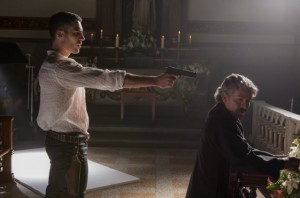 Producer/scenarist J. Michael Straczynski created (and wrote most of) the series BABYLON 5 and JEREMIAH and wrote the screenplay for the Clint Eastwood-directed CHANGELING, among many other credits. When Straczynski teamed up with the sibling team of Andy Wachowski and Lana Wachowski (the auteurs of THE MATRIX trilogy), the result was Netflix’s SENSE8, now streaming its twelve-episode first season.

SENSE8 revolves around the idea that humanity is taking a little evolutionary step forward. Eight people, all born at the same time around the world – Mexico, San Francisco, Chicago, Germany, Iceland, Korea, India, Africa – discover that they can not only see one another remotely, but actually access each other’s emotions and abilities. This comes in handy when, say, you’re a young bus driver in Nairobi who can suddenly employ the martial arts skills of a Seoul businesswoman. It can also facilitate empathy, concern and love. SENSE8 has some extraordinary visual qualities, partly thanks to its premise, partly thanks to the directing skills of the Wachowskis, and partly thanks to the fact that it films on location in the far-flung areas where its intertwined stories take place.

When Netflix has a day of question-and-answer sessions for the Television Critics Association press tour at the Beverly Hilton Hotel, co-creator/executive producer Straczynski stays after the SENSE8 panel for some follow-up discussion.

J. MICHAEL STRACZYNSKI: I’d known them for years, they were friends of mine. They were working on NINJA ASSASSIN and they called me and said, “Why don’t you come to San Francisco with Lana, and we’ll work on it together?” They wanted to do television badly and when you want something done badly, you come to me. When you want something done well, you go to Joss Whedon [laughs – note: he is joking]. And Lana and I sat down over a weekend in San Francisco and were spinning out ideas and came up with the notion for this and sort of hammered out the structure over the course of that weekend and started working on scripts.

AX: How did you decide that the number of people within the cluster would be eight, as opposed to five or ten or some other amount?

STRACZYNSKI: We were going over whether it would be six, seven, eight, nine, whatever the number was, and we hadn’t had a title for the show yet, and the next day, Lana appeared on the upstairs balcony of her house with a notebook in which she had written the word “Sense8,” and said, “I have the title. The hard work is beyond us now.” So there were eight characters.

AX: Is there a character who spoke to you more than the others?

STRACZYNSKI: Yeah, we all have our characters. For Lana, obviously, it was Nomi [the transgendered computer hacker played by Jamie Clayton. There’s a lot of me in Wolfgang [played by Max Reimelt – the character is a minor-league German criminal who kills his father], which is both good and bad.

AX: Is your father still alive?

STRACZYNSKI: No, he is not, and it was a great day when he died. We had a very bad relationship.

AX: Did it help to write about a terrible father/son relationship?

STRACZYNSKI: Oh, sure. [laughs] Burn it out.

AX: Not in any specific details, but there’s a little bit of a LOST vibe to SENSE8 in terms of the many character storylines and the overlapping mysteries. Was Naveen Andrews, who played Sayid in LOST and plays Jonah in SENSE8, brought in with that in mind at all?

STRACZYNSKI: We never looked at LOST at all. We just happened to be big fans of Naveen’s work. When he became available to us, we grabbed him immediately. So there was no sense of capitalizing on LOST at all.

STRACZYNSKI: Well, it’s both. When you realize it for the first time, it’s like, “Oh, crap, really? How did we miss this?” But then it becomes fun to figure it out. What makes sports entertaining are the rules. If baseball had no rules, it would just be guys hitting balls and running around the plate. What makes it fun is working with those confines. We see limitations and confines as being part of the fun.

AX: Did you pick the locations of your characters based on places that were accessible production-wise, or did you decide where you wanted the story to go and then made the places accessible to the production?

STRACZYNSKI: It was more the latter. We were virtually the first big production to have gone to Nairobi, because there really isn’t the kind of infrastructure there for the kind of [production] we wanted to do. They tend to do very small-budget character stories, not big action things. So we looked at what works best for the characters first, and then how to make it production-friendly.

AX: Is there any kind of thematic connection between the eight locations that people should be looking for on repeat viewings?

STRACZYNSKI: Not the places. The characters are the connection.

AX: Besides our group of eight characters, with this new evolution, are there other clusters out there?

STRACZYNSKI: Yes, there are other clusters out there, and if there were to be a second season [the status of this is unknown at press time], we might be meeting them.

STRACZYNSKI: I think it’s both. Some of them will be more [attuned to the commonality of being in a cluster], some will say, “I’m hiding out, don’t reveal me,” the value of not being seen. So not all Sense8s will be naturally good people. Some people with that ability might not be the best people. So there’s a whole range of them.

AX: Would you say SENSE8 is aspirational in terms of “Wouldn’t it be nice if there were seven other people out there that were us?”

STRACZYNSKI: Yeah. I think we all want someone who knows who we are and can penetrate past our secrets and our walls to know who we are. When you’re in love with someone, you want that person to know who you are. And as a culture, we’ve been so divided and marginalized and factionalized and tribalized, the idea of having a group of people who actually are pulling together rather than pulling apart I think is important.