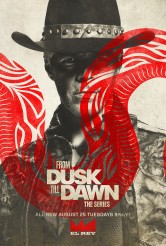 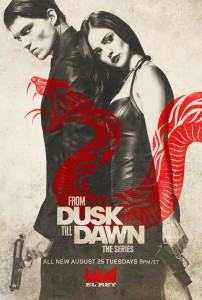 In Part 2 of our exclusive interview with FROM DUSK TILL DAWN show runner/executive producer Juan Carlos Coto – “Carlos” to all his friends and colleagues – he talks more about Season 2, airing Tuesdays on the El Rey Network.

ASSIGNMENT X: The Culebras drink blood, but they’re snakelike instead of batlike. Do you watch snakes at all for ideas about how the Culebras act?

JUAN CARLOS COTO: Yeah. Malvado [played by Esai Morales] is a character obsessed with skin, molting, as a snake does. You’ll find out how and why when you watch the show – again, skin being something thematically about identity and where you fit. Also, snakes have these big brains that sense heat and can project things. That’s where we came up with this whole thing that we started in Season 1, where if a Culebra bites you, it can sort of ingest your soul and project your soul onto other minds – it can kind of play a mind-trick on you and it looks like you’re shape-shifting. So if I was to bite Zane [Holtz, who is across the room at this point in the interview], I could actually make you think I’m Zane for a little while, because I’m messing with your head. So stuff like that. Little snake-lore things – they’re also cold-blooded, which affects them as well. So there are little things like that that we’re going to constantly explore, folding fangs. We love that.

AX: Can you talk about any kind of tonal difference between Season 1 and Season 2?

COTO: I think the tone is pretty consistent. The tone is very DUSK-y, is what we call it, where it’s action or crime with a little bit of crazy. We can do stuff on our show that you can’t do on regular shows and get away with, because the universe is a little insane. And that’s fun, because it makes the show unpredictable and it makes the show fun and funny sometimes. So I think tonally, we always approach the series, Robert [Rodriguez, creator of the FROM DUSK TILL DAWN series, director of the film it is based on and founder of the El Rey Network] and I, as slightly more grounded than the film. Because the film makes this sort of crazy left turn, where the vampires are [introduced]. But the shift in tone, sure, the characters feel it and they react to it, but there’s kind of this understanding that, “We’re going to fight our way out of here and then it’ll be over, because it’s a movie.” [In the TV series], it’s the grounded question of, how would these characters actually deal with having their world turned upside-down and what does that look like? So that’s really what the show is going forward, without losing that fun and that energy, asking those questions and challenging those characters in a real way.

AX: With Danny Trejo in the show this season as the Regulator, did you write the character and then go, “Who can we get to play this?”

COTO: That was fun. We wrote the character and then the light bulb kind of went off, but Danny brought his own energy to it and, like any good actor, he makes it his own. And so it was really about watching that character form, literally and figuratively, on the screen.

AX: So it wasn’t Robert Rodriguez coming and going, “Hey, Danny Trejo has an opening in his schedule, do something!”

COTO: No, Robert very much, from the ground up, works with us on the season and then sets us free to do stuff. That’s Robert’s thing – he trusts you, he collaborates with you, but he wants, he respects individual inspiration. And that’s from the top to the bottom, from the wardrobe to the production design to everyone. Everyone is encouraged to do their own thinking and their own creating and bring stuff to the table. And that’s why it takes on a life of its own.

AX: Are you and the writers’ room in Austin, where FROM DUSK TILL DAWN shoots, or do you telecommute?

COTO: The writers’ room is here [in Los Angeles]. This season was different. We actually wrote almost all the episodes before we started filming. First season, we wrote about four of them and then we were writing in the writers’ room in Burbank while we were going back and forth to Austin. This season, I did some pretty major rewriting on the last few, but we had most of them written. The writers’ room was actually closed most of the time we were filming. So it was a little different. But yeah, the writers’ room is based here. It’s a great room – seventy-five percent Latino writing staff, forty-three percent of our cast is Latino and like eighty percent of the directors. It’s cool.

AX: With Season 1, a lot of the show took place either inside the club, the labyrinth or inside the RV. In Season 2, are you getting out on the street a lot more?

COTO: Well, yeah, and the bad thing about that is, we shoot a lot of nights. We shoot from six PM to six AM. As I always tell the crew and the actors, “It’s not called FROM MORNING TILL NOON.” [laughs] So, sorry. I’m constantly apologizing. It’s four in the morning and you know you’re in trouble when you get off of work and you come back to the hotel and they’re serving breakfast. It’s like, “Maybe I’ll make myself a free waffle before I go to bed.”

COTO: Eventually, yeah. It’s tough. But it’s really a testament to the crew and the cast what they do and how they adapt. It’s really great.

AX: Do you feel like the vampire genre at this point is like, say, the medical genre, that nobody’s going to go, “Oh, it’s another medical show, no, there’s too many …”

COTO: As long as people tune in and they feel like you’re having fun with the genre or challenging the genre the way we do – we’re Culebras, so we’re a little different – I think people will always go for it. And I think the broader thing here is horror as a genre. That’s what we do. I mean, it’s very much a crime saga, but it’s an action/horror show as well.

AX: How much are you trying for actual scares? They went for some jumps in the film …

COTO: We try to have several every episode. We don’t tend to build around scares, but we do want them, and we want them in surprising ways. And it’s really about building the stories out of the characters. So yeah, we look for it wherever we can, but it’s not designed for that. Like SCREAM, for example, I think is sort of designed around scares. Not to take anything away from it, but that’s the language of that show. The language of our show is very much crime. And when I say “crime,” I don’t mean procedural like CSI, I mean crime saga, I mean [Robert] Parker novels, gangster things, Lawrence Block, any of those – Richard Stark, those old pulp writers, because pulp fiction is kind of our genre. So it’s about heists and hits and jobs and gangland leaders and all that kind of stuff. That’s the bones we use to make the stories, and then we put the supernatural on top of that.

AX: What have you learned from Season 1 about, what are the strengths to write to and what are some things that you maybe want to do less of?

COTO: I think the main thing to do is not let the tail wag the dog, meaning, don’t let the mythology wag the show. Sometimes you can start a story from the mythology, get too deep into the mythology and you forget that these are, A) human beings and B) criminals, that you sort of lose two-thirds of what makes the show really cool.

COTO: I am adapting a reboot of ROUTE 66 and I also am writing a film for HBO about the Mexican civil rights movement. It’s an adaptation of a documentary called A CLASS APART and I’m writing it for Eva Longoria, and it’s about the first time Mexican-Americans argued before the Supreme Court and won equal protection of the law. No one knows about it, because it happened six months before Brown vs. the Board of Education, but it’s this fascinating case where two Mexican-American lawyers from San Antonio argued before the Supreme Court and won in 1962. It’s a really cool story.

AX: Did you have a previous job that particularly informed your work on FROM DUSK TILL DAWN, whether it was HEROES or 24 or …?

COTO: I think my life is informing my work on this show more than anything else. This is a show about brothers, I have two brothers, I lost a brother, and so that was part of it, and then growing up Latino and telling stories about people who aren’t exactly sure where they fit in the world. My entire life’s kind of about this show. Honestly, I don’t want to do a show about being Latino, because to me, that’s too limiting. Again, to use the example of STAR TREK, it was a show that was a space opera, but had all kinds of other things going on. It wasn’t about being in the ship. I am making a show about Latinos, but it’s really a show about criminals and vampires, criminals and Culebras. So I can have my cake and eat it, too.

This interview was conducted during El Rey’s portion of the Television Critics Association summer press tour at the Beverly Hilton Hotel.