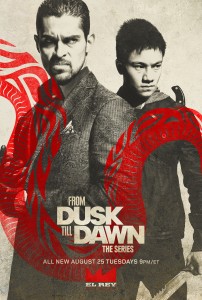 Juan Carlos Coto – called “Carlos” by absolutely everyone except the IMDB – is in his second year as show runner/executive producer on FROM DUSK TILL DAWN, the TV series created by Robert Rodriguez, based on the 1995 bank robbers and vampires movie directed by Rodriguez and scripted by Quentin Tarantino from a story by Robert Kurtzman.

The television DUSK, now in its second season Tuesday nights on the El Rey Network (co-founded by Rodriguez), has expanded on the film’s mythology. The creatures of the night are no longer traditional vampires but rather snakelike Culebras, who drink the souls of humans through the blood they ingest and conduct themselves like gangsters. The story continues to follow the adventures of the now-separated Gecko brothers, with Seth (D.J. Cotrona) nursing his wounds after the blowout battle to escape the Culebras in the season finale, and his now Culebra-turned brother Richie (Zane Holtz) pulling heists with Culebra royalty Santanico Pandemonium (Eiza Gonzalez).

Coto has spent most of his career in the action and supernatural genres, with credits that include INVASION, 24 (where his brother Manny Coto was also a writer/producer), STANDOFF, HEROES and NIKITA, which he says puts FROM DUSK TILL DAWN squarely in his wheelhouse. Although, Coto points out during a sit-down interview, he can write other things as well.

JUAN CARLOS COTO: It’s funny – the first thing I ever, ever, ever did was a freelance episode of a show called NEW YORK NEWS, which was not genre. It was ER at the New York Post. Mary Tyler Moore was the editor, it was created by Michelle Ashford, who created MASTERS OF SEX, and I wrote Episode Eleven, and they only aired seven of them [laughs]. But I had been a journalist – I worked for the Miami Herald for four years, and so I wrote it freelance, and it was interesting. So that was my first thing. But I started on a show called THE PRETENDER in ’96, and that was a complicated mythology, four seasons, and I just have always loved that. My big thing is, I love telling big, rich genre stories that have an anchor in the real world and that can allow you to kind of comment on the real world, for lack of a better [description], the way STAR TREK did. STAR TREK was a big space opera, but they dealt with things that were happening in the real world in their own way.

Again, I try to do that with every show, and we do it on this show. It’s very much a show about identity and about culture and about borders and all that stuff. It’s all in the bones of the show. It’s a crime saga, with vampires, sure – Culebras. I always say, “Crime story with a supernatural edge.” Within that are stories of identity – Freddy Gonzalez [played by Jesse Garcia], [thinking], “Here I am, I’m Mexican-American, where am I from, who am I, where do I belong?” Season 1 was very much about him going literally back to his roots and finding out where he belonged. Season 2 is very much about discovering the job, the destiny of that, what is that, what’s the second part of that? Because all he learned in the first season was that he was bitten and it didn’t affect him.

Why? Kate Fuller [played by Madison Davenport] is the story of faith. Kate is Christian, tasked by her pastor father with protecting her brother [the new Culebra Scott, played by Brandon Soo Hoo] from having to kill innocent people. How do you do that? Forget the fact that “the Devil” actually exists now, or something evil actually exists – “How do I deal with that? Let me set that aside. Let me try to look at these Culebras as humans and let me try to figure out who my brother is. That’s a story of faith.”

Vengeance – because Santanico’s [played by Eiza Gonzalez] vengeance is very much a story of, if you go out into the world and decide to wreak havoc on everyone who did you harm, what does that do to you? That’s a question everyone’s asking every day, right? Our country’s asking itself that. They’ve been asking itself that for ten years. Not to get too lofty, but it’s all kind of in the bones of the show, and it’s a story of two brothers trying to figure out how to protect each other. So I think that’s what I always try to find, is a genre world that can give you a foothold in the real world.

AX: At the end of Season 1, but it looked like Seth and Kate were going off together. Do they agree about what it is that they’re doing?

COTO: [laughs] No. She wants to find Scott. At the beginning of the season, they’re in Mexico together – it’s three months after the events of the first season, and remember, at the end of it, she says, “You want some company?” and he says, “Yes,” and they leave together. But she has a thing in the back of her head about the promise she made to her dad and that’s really what she’s dealing with. Three months later, they’re going from job to job, and she’s like, “I thought we were going to get passports and go back to the States, I want to try to find Scott.” So that’s how she begins. Richie and Santanico are sort of like Bonnie and Clyde. Because they’re on this mission of vengeance against a lord, they’re going to work their way up that organization and find out where he’s hidden and get to him and kill him.

AX: And that Lord is played Esai Morales, who’s joining DUSK this season?

COTO: That’s Esai Morales, that’s Lord Malvado, yeah. And so that is an interesting challenge, because they themselves also don’t see eye to eye. She’s like, “I’m just going to kill this guy.” He’s like, “Well, wait a minute. There’s this whole criminal organization that’s very powerful, that could make me powerful, that could make me better and bigger than my brother.” Which is kind of what it’s always about. The brothers are separated, and that’s also one of the major arcs of the season. So those are kind of the big pillars, and then there’s Carlos [a Culebra soldier played by Wilmer Valderrama], who gets out of the labyrinth in Episode Two. He was banished to the labyrinth at the end of first season. He gets out and he’s got his own crazy agenda, which we don’t even quite understand until later [laughs].

AX: So are we on three different trajectories, and it’s kind of like GAME OF THRONES?

COTO: It’s actually more like that in Season 1, in the sense that everyone was in their own world, but forces start to bring them together. Everyone will be inexorably pulled together. You can kind of count on that. It’s not GAME OF THRONES. We’d need another fifty characters [laughs].

AX: What is Scott’s journey in Season 2?

COTO: Well, it’s very much a gangster story. It’s a kid who’s been initiated into a gang and how do you become part of that gangster family? It’s like Henry Hill [in GOODFELLAS] – it’s like, “I want to be a gangster, how do I do that?”

COTO: The other one first. Richie doesn’t have a family yet – Richie’s going to get one, too. Richie and Scott are actually very similar in that regard as well.

AX: So they’re going to perhaps bump heads because of those similarities?

AX: And how much is the longing of the Gecko brothers to reunite part of the theme?

COTO: That’s always there. The Geckos are very much a spine of the universe. The Gecko brothers are a storyline that will continue through the five seasons of the show. It’s always going to be about them in some form or fashion.

This interview was conducted during El Rey Network’s portion of the Television Critics Association summer press tour at the Beverly Hilton Hotel.