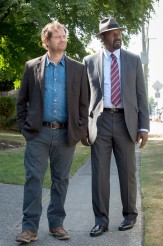 The actor also looks back at 24 and THE UNIT 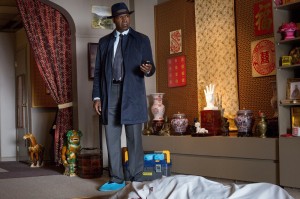 Back in 2001, seven years before Barack Obama was elected President of the United States in real life, Dennis Haysbert played David Palmer, the first African-American U.S. President, on Fox’s 24. Haysbert remained in the role for four seasons before his character died and he moved over to CBS’ THE UNIT, where he spent another four years as Special Ops commander Jonas Blane. Haysbert was also voted Most Trusted Man in America, based on his work as spokesman for Allstate Insurance. Film work has included the original MAJOR LEAGUE, FAR FROM HEAVEN and SIN CITY: A DAME TO KILL FOR.

Now the California-born actor is back at Fox on BACKSTROM, Thursdays as 9 PM, portraying a very different sort of character. The title character in BACKSTROM, played by Rainn Wilson, is a brilliant but ferociously antisocial Seattle homicide detective. The series, developed by executive producer Hart Hanson (BONES), is adapted from a series of novels by Leif GW Pearson. Haysbert plays Detective Sergeant John Almond, who is a preacher when he’s not doing police work.

AX: You’ve played people in positions of great authority – obviously, the President on 24 and then the leader of THE UNIT. John Almond has some authority, but he has a little bit less, and he’s also is getting a less respect from at least one work colleague, namely Backstrom. Is that fun to play as a difference, or do you sometimes feel like, “Aggh”?

DENNIS HAYSBERT: You know what? I like being in authority over myself. I enjoy this character, because I’ve never seen any character like it on television.

AX: You’ve talked about how Almond works his religious beliefs into his work. Do you think he always had the religious beliefs, became a detective and then felt that he needed to incorporate more belief into his daily life, or that he actually came to religion later?

HAYSBERT: I think it’s something that came later. It’s a calling that came later. It’s nice to have a physical and legal authority, but then to come in and have a moral authority as well. And I think he was a cop first and like I said, in evidence of that one scene, which I thought was brilliantly written, with the kid, I had to ask myself, how many times had I [as Almond] wanted to stop and go back and talk to someone I had just interviewed about a crime? And this time, I decided, I’m going to stop, I’m going to talk to this kid. I’m going to help this kid. Because he looked like he was ready to go down a dark path.

HAYSBERT: It gives him a measure of optimism and opportunity to spread the Word. And not in an overzealous way, but in a way that he really feels he can help. He’s not going to solicit people to come to his church. People are going to find his church.

AX: How is the acting ensemble on BACKSTROM?

AX: Does the material give you the opportunity to be funny sometimes?

HAYSBERT: Yeah. I think it’s more realistic and it has some humor in there, as well as some good hard drama. And we have that. We have a nice blend of that.

AX: Were you looking for something that allowed you the opportunity to do a little bit of comedy?

HAYSBERT: You know, when I first started doing this, I didn’t think it was a comedy. I thought it was a drama with humor. But it seems like they’ve been leaning more towards the comedy end of it, which is okay, as long as they keep the reality of what police actually do and how they do it safely.

AX: Reaching back, do you feel like you made a difference with playing the U.S. President in 24? It seems like you sort of got America a little more ready for the idea of an African-American Commander in Chief.

HAYSBERT: I think so. And all the good people here at Fox. It was a real bold move. I said when I was shooting 24, if I inspired one person of color to seek the presidency, I’d done my job.

AX: Reaching back some more, were you happy with the way THE UNIT wrapped?

HAYSBERT: No. I think it kind of jumped the shark a little bit off and on in the fourth season. It was a mixed bag. I think we could have gone on further. Actually, I thought we could have got a movie out of it. But it is what it is.

HAYSBERT: I have some films that are coming out. I have DEAD RISING coming out, THE EXPERIMENTER coming out and TATTOO.

HAYSBERT: It’s a zombie movie, it’s based on a game.

AX: You run around shooting zombies?

HAYSBERT: No, I was a general, so I’m bombing zombies.

AX: Was that fun?

HAYSBERT: Oh, a great deal of fun, yes. I have some projects I really can’t talk about that I may be getting funding for as a producer and star. So I’m working on it.

AX: What would you most like people to know about BACKSTROM right now?

HAYSBERT: That it’s a fun ride. Give us a chance and we’ll get you.

This interview was conducted at Fox’s party for the Television Critics Association press tour at Pasadena’s Langham-Huntington Hotel.