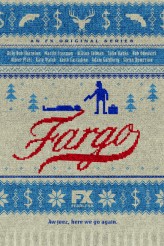 A good start to a limited series that honors the spirit, but not the letter, of its source material 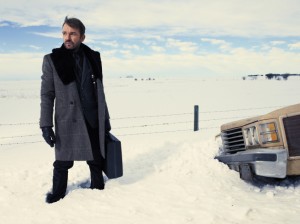 The 1996 feature film FARGO, a deadpan dark comedy about a bumbling Minnesota businessman and a crime gone terribly wrong, won Oscars for Frances McDormand’s lead performance as a hard to flap small-town sheriff investigating the crime and for the original screenplay by writers/directors Joel and Ethan Coen.

FX’s new limited series FARGO, adapted for TV by Noah Hawley, does a notably good job of capturing the feature’s tone of dark whimsy that ever-so-carefully treads a tightrope of contempt, pity and (for the good guys) genuine admiration without repeating the first film’s storyline or characters.

Here, we start out with professional hit man Lorne Malvo (Billy Bob Thornton) who runs into a snag – and off the road – outside the small town of Bemidji, Minnesota. One of Bemidji’s most put-upon residents is hapless insurance salesman Lester Nygaard (Martin Freeman, the English actor known for the HOBBIT films and as Watson on the SHERLOCK series) who winds up in the emergency room waiting room. Malvo sizes him up, sits next to him and offers to kill one of Lester’s chief tormentors. Lester doesn’t say yes, but he doesn’t say no. This sets quite a few wheels in motion. Other parties involved include chipper, observant sheriff’s deputy Molly Solverson (Allison Tolman) and Duluth, Minnesota police officer Gus Grimly (Colin Hanks).

Apart from an odd encounter with Malvo, we can’t tell how Gus will fit into the larger picture, but there are good clues informing us of how the rest of FARGO will fit together; it could be a mislead, but we sense the organized crime aspects will come together before too long. There is certainly method in Malvo’s malice, although we can see he’s got a sense of pure mischief as well, what with setting people on each other’s tails simply because they annoy him.Thornton has the whole charming-to-terrifying sliding scale down to an art form in this. He’s evil but charismatic, and when he’s up against bullies, it’s easy to root for him, even if he’s a murderer and his adversaries are not.

Freeman does a fine job with the Scandinavian-tinged, folksy Minnesota accent. He shows us the flinching defeatism behind the bland, pleasant exterior, and we feel a little sympathy for him, but he’s so hapless and insular that we don’t exactly like him either. Again, the actors and the show, at least in the opener, manage to stay straight on the line that keeps us curious without making us root for either of its leads.

We do like Tolman’s plucky Solverson, who is able to come to reasonable conclusions and is interested in doing the right thing; it’s also fun to see Keith Carradine in a guest shot as her dad, who wishes his daughter had a less hazardous profession. We see too little of Hanks this time around to have much sense of his character, apart that he’s got the good sense to know when to leave well alone.

What’s good about FARGO is that it’s smart and fully thought-out; we believe in the quirks of Bemidji and it doesn’t seem like anywhere else on television, albeit we could imagine Raylan Givens (who just vacated FARGO’s time slot for the season) coming in and setting things right in a way that is too orderly for this particular universe. From the evidence so far, it looks like the show and its makers know what it is, how to keep us engaged without going for sentiment and how to avoid getting too clever for the mood. Altogether, it seems like a good bet.