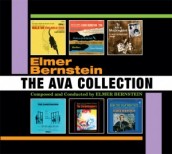 Though taken for granted by today’s collectors, being able to get the actual, original tracks for a film score has only been a relatively recent development. What most fans received for decades were performances done after the fact by the likes of Henry Mancini, Jerry Goldsmith and John Williams, who took the most melodically accessible tracks from a given film, then lushly arranged them for albums that barely topped the half hour mark. Before Elmer Bernstein specifically marketed these types of re-performances specifically for the soundtrack appreciator market with his “Film Music Collection” label (whose Film Score Monthly box set is still available), the composer performed his scores for the Ava label from 1961 to 1965 – mostly under 30 minute releases that are best known for their fairly miserable-sounding reissues through Mainstream Records. But now after at 20-year search, Intrada Records has finally gotten hold of Ava’s original three-channel masters and collected their six Bernstein albums into one reasonably priced release, with the original releases’ spectacular-sounding results.

There’s nothing like Bernstein’s classic jazz 60s swing, whose muscular, sexy brass vibe comprises most of the Ava re-performances – some of which remain the only way to get these titles. The gold standard of the set remains WALK ON THE WILD SIDE, whose lustful sax and rambunctious strings provide the cathouse strut for the movie’s 1930s New Orleans setting. Bernstein knew how to mix the uncouth, depraved lifestyle that movie jazz has usually represented with emotional heart, here becoming the melancholy, and often lyrical music for the impossible relationship between Laurence Harvey’s poor shmuck and his headfirst fall for Jane Fonda’s lady of the night. Even more swaggering attitude informs THE CARPETBAGGERS, which featured George Peppard playing another charismatic SOB, this time in the womanizing, self-hating fashion of Howard Hughes. Bernstein really opens up the jazz-brass section here from the original recording (also available on Intrada), capturing a hell-raising attitude, while using more restrained, child-like percussion and winds to get across a little boy lost in a world of flesh and money, as drowned out by a hard-drinking sax. THE CARETAKERS takes a bachelor pad route in its selections for a movie dealing with the mentally ill, and it must be a pretty swinging psychiatric hospital indeed with the rhumba’ing on hand, while its theme has spy-drive urgency. Even the shrieking “Electroshock” can’t help but be jazzy, while other score-centric cues on the original LP’s second side show Bernstein’s dexterity for suspenseful psychosis of piano, strings and violin.

Having Steve McQueen as an ex-con band singer in BABY, THE RAIN MUST FALL lets Bernstein take his jazz chops in a boisterous, pop-honky-tonk direction that positively Watusi’s for an album that’s most definitely in the pop direction, while listening to such jazzily re-orchestrated, alternately rousing and seductively re-orchestrated “Move and TV Themes” as RAT RACE, ANA LUCASTA and THE SWEET SMELL OF SUCCESS has the smoke-filled intimacy of slinging one back as Bernstein and his big band play their set in a Manhattan bar after the witching hour. The completely odd score out here is perhaps Bernstein’s most tender one, as the loss of innocence that fills TO KILL A MOCKINGBIRD gets a performance that’s equal parts poignancy and dramatic power, creating a MOCKINGBIRD unleashed if you will.

Not only does Intrada’s Ava collection have terrific sound, but its booklet does an impressive job of not only featuring label head Douglas Fake’s appraisal of this remarkable find, but also presents the original album’s covers and liner notes in graphically enticing fashion.

Tags: Elmer Bernstein, Movie Soundtracks, The Ava Collection, The Caretakers, The Carpetbaggers, The Rain Must Fall, To Killing A Mockingbird, Walk on the Wild Side, baby, review