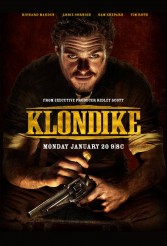 The director also talks about his work on GENERATION KILL 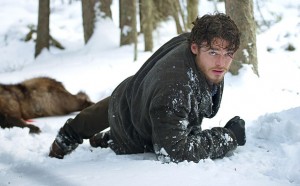 Discovery Channel’s first scripted project, KLONDIKE, is a six-hour miniseries, running in three two-hour blocks, dealing with the Yukon gold rush in 1897-1897. Based on Charlotte Gray’s novel THE GOLD DIGGERS and scripted by executive producer Paul Scheuring, KLONDIKE stars Richard Madden as novice prospector Bill Haskell, Abbie Cornish as a businesswoman in the mining town Dawson City, Tim Roth as a malevolent mover and shaker and Sam Shepard as a determined man of the cloth.

Simon Cellan Jones (pronounced Kethlen Jones) directed all six hours of KLONDIKE in Alberta,Canada, in conditions sometimes almost as arduous as those faced by the real prospectors over a century ago. At an event held by Discovery Channel for the Television Critics Association, he talks about working at high altitudes in freezing conditions.

ASSIGNMENT X: How did you become involved with KLONDIKE? Are you out of the narrative world, or from the documentary world?

SIMON CELLAN JONES: I’m from the drama side. I’ve been wanting to work with [KLONDIKE executive producer] David Zucker for awhile, I’ve known him for a little while, and we tried to do something together, and then this came up and it was sort of, the script made me an offer I couldn’t refuse.

AX: Had you ever directed anything that was this physically difficult, with avalanches and rapids and wolves?

CELLAN JONES: No. I did an HBO show called GENERATION KILL, which was pretty physical, and all over Africa.

AX: GENERATION KILL was about the first days of the U.S. military in Iraq in 2003. Do you see any similarities between KLONDIKE and GENERATION KILL in terms of the types of people involved? Because KLONDIKE, even though it’s not officially a war, has a lot of violent conflict.

CELLAN JONES: The thing about war is, you need to train people to follow orders, because GENERATION KILL was about how these people didn’t always like following orders. But the KLONDIKE people are sort of lost souls. They’re kind of reckless – it’s not just money, they’re looking for something deeper and darker than that.

AX: Both KLONDIKE and GENERATION KILL are based on books, but GENERATION KILL, everybody was a real person, whereas in KLONDIKE, real people like Jack London, played by Johnny Simmons, are interacting with fictional people like Richard Madden’s character Bill Haskell. Does that make a difference at all?

AX: Alexander Skarsgard had done a lot of work in Sweden before GENERATION KILL, but a lot of that cast was fairly unknown, whereas in KLONDIKE, people like Sam Shepard and Tim Roth and Richard Madden and Abbie Cornish all have pretty long resumes. Is there any difference in working with leads who are more experienced?

CELLAN JONES: Well, yes and no. I mean, working with Sam, he’s a Pulitzer Prize-winning guy who’s been in the most incredible movies, it’s different talking to him than to a twenty-year-old who’s doing his first job. And Sam raises your game, as does Tim. But ultimately, they were both there wanting to do a great job and produce a great character.

AX: Can you talk about casting Richard Madden as your leading man?

CELLAN JONES: I mean, I sort of knew his work on GAME OF THRONES. Obviously, we saw lots of people and some really great people, but he was the one that just had this weird commitment to it. I knew it would be exciting to work with him.

AX: Richard Madden is British and Abbie Cornish is Australian, but they’re both using American accents. Why did you decide Tim Roth should be go ahead and use his real British speaking voice?

CELLAN JONES: Because it was originally written German, and then Tim felt it would be more interesting if he was British. We just wanted to show that all sorts of different people came to that place, British people, Irish, Scottish, Russian, Chinese even.

AX: Working in an environment where obviously everybody is experiencing the same physical misery on both sides of the camera, does that help you as a director empathize with what’s happening in the scenes?

CELLAN JONES: Yes, it does, because you don’t want to ask actors to do something you wouldn’t want to do yourself. Otherwise, they’ll just lose any kind of respect for you. As Richard was saying, I’d sort of forgotten that altitudes really change your breathing and everything like that, so I would start running up a mountain and suddenly wonder why I was out of breath after five seconds. And it was the toughest thing I’ve ever done physically. It was absolutely brutal, but [unlike the real prospectors], we went home and stayed in our apartments or whatever. We didn’t have to camp out. But we had so little time to shoot such a big thing. It was eighteen-hour days for four months.

AX: Why did you decide it should be raining so much – to emphasize that it should be miserable? Especially because it was causing production problems when your rain machines kept freezing up?

CELLAN JONES: Well, a lot of that was scripted. Paul was after that. But I sort of think I pushed it even further, because it is about the battle with nature, and we didn’t want it to look easy. And the idea was that every day was some sort of hardship for these guys. A lot of them ran away, a lot of them died, and the ones who stuck it out, they had to be pretty tough.

AX: Is there anything in the story that you empathize with in terms of something that you would risk your life for, or a situation that you wouldn’t want to be in with everybody around you trying to kill you?

CELLAN JONES: No, I wouldn’t want that [laughs]. I wouldn’t want that, but I do understand these people who push themselves to do something – it’s very much in the spirit of the Jack London stories and books. I think some of these characters were mad, some of them were running away from something, some of them wanted to become something else and I think it was an escape thing. It was also – the people who survived, I think it made them bigger and stronger and with more self-respect.

AX: What would you most like people to know about KLONDIKE?

CELLAN JONES: I think I would like them to think that they are there in the place. That’s what I want them to feel about it.

AX: And is there anything you’d like people to know about GENERATION KILL?

CELLAN JONES: That’s something I’m incredibly proud of. I went on to work with [GENERATION KILL writer/producer] David Simon a couple of times after that. I think he’s just the most fantastic writer and for me, it’s all about the writing, really. That’s the best way to choose.