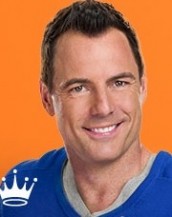 Mark Steines spent many years as a host on ENTERTAINMENT TONIGHT, but says he really enjoys the format of his current gig HOME & FAMILY, which he co-hosts with Cristina Ferrare. Now in its second season, Hallmark Channel’s two hours a day, five days a week show was nominated for an Emmy in its first season, combining talk with practical advice about health, home repairs and more.

Steines is present at a luncheon (menu created by Ferrare) hosted by Hallmark for the Television Critics Association, where he’s happy to talk about why he’s so at home on FAMILY.

AX: You’re now doing Season 2 of HOME & FAMILY. Did Season 1 go the way you were expecting? What were the surprises?

MARK STEINES: Actually, it went better than expected. Who would expect an Emmy nomination six months in? How far were we in – maybe four months in – to have an Emmy nomination, and having Christina come on board was such a blessing. We’ve been gangbusters the whole season. My expectation was, I know how difficult it is to get a show off the ground and especially a live two-hour show. So I am more than overwhelmed and thrilled by all of this.

AX: What do you think makes HOME & FAMILY distinctive?

STEINES: It’s a house. When people come over, and this is what’s different about this show than I think many others, is we’re not in a studio, we’re not set out to make it look like a house, we’re a real house. So when people come over to visit us, you welcome them and you look after them, and that’s what we want to do. Our intention, our goal is to entertain our guests and leave them educated and better for watching the show. So they walk away with something – there’s something we’re going to teach them about their home or about their family, or about how to fix them both. We all have families that at some point or another need a little attention, whether it’s an aging parent or whether it’s a child with a learning disability or – so we want to get answers for that. Or we can fix that leaky sink. Which I had at home, the way. It’s in the bathroom. And you know how I knew it wasn’t working? Because I went in there and I saw Post-Its. It said, “Sink not working.” That’s how I get notices in my house, through Post-Its.

AX: How does this differ from your previous jobs?

STEINES: Well, it’s two hours [and there is a] longer interview process. I mean, my interviews have in the past with E.T. been fifteen-, twenty-minute conversations, but we don’t always get to see that, and this is live, so you get the whole segment. Or we have somebody on for a couple of segments. We get to cook with them. We’ll figure out if they can sew, if they can fix a rain gutter, or they know how to fertilize the yard.

AX: With any given episode, do you already know what it is you’re going to talk about?

STEINES: We’ll get scripts ahead of time for who’s going to be on the show, what we’ll be discussing, and we’ll walk through any of the stuff during rehearsal to make sure our cameras know, but everything that happens, happens in the moment, in that house.

AX: What’s the most interesting thing you’ve learned or experienced so far?

STEINES: I found out that I can’t cook, that putting a Pop Tart in the toaster is not cooking – Christina will drill that into my head. I’ve learned so many great healthy things, we’ve had so many experts – these are some of the things I know our audience maybe shares on some levels, but I love the stuff that we do when we’re dealing with health and fitness and nutrition and DIY stuff. I love some of our really good interviews about relationships. We’ve had relationship experts on the show. I really enjoy it. We’ve got girls going through the three-month weight-loss process – gosh, there’s been a lot. I loved repurposing the stuff that we have in everyday world palettes. We’ve done so many things with a palette rack that I can’t even tell you if there’s anything else we could do with it. So yeah, I learn stuff every single day on the show.

I will tell you – my parents both moved into assisted living and my dad’s also dealing with Alzheimer’s, and we’ve had people on the show that have talked about these things, so a lot of this stuff I know directly relates to my life, so I hope it translates to our viewers. So the only project that I have right now is being close to my parents as they go through this transition. They live back inIowa, so I’m going to spend time with them back there as soon as we wrap.

AX: Is there anything else you would like to say about HOME & FAMILY?

STEINES: I’m looking forward to next year. I think we’re just going to keep getting bigger and bigger. I love the format of this show. I think it’s really unique and I think people watch the show because it is the antithesis of all the talk shows that are out there that are all polished and slick, whether it’s Kris Jenner’s new set or THE TALK or THE VIEW, everything is perfectly lit and set and ours is completely the opposite of that – not that we’re not lit well, it’s just that we are a home, and that’s what I love about it.