The actor also talks people's reactions to the Red Wedding 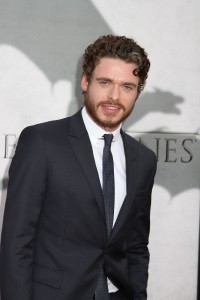 KLONDIKE is Discovery Channel’s six-hour, three-night (Jan. 20-22) excursion into scripted programming. Based on Charlotte Gray’s fact-and-invention-blending novel THE GOLD DIGGERS, KLONDIKE  tells the story of the Yukon gold rush in the 1890s, where people made fortunes or died – or killed – trying.

Richard Madden stars as young prospector Bill Haskell, who finds himself working with and against the local mill owner (Abbie Cornish), a thuggish fellow prospector (Tim Roth) and a preacher (Sam Shepard) as he struggles to stake a claim in the forbidding frozen terrain.

Scotland-born actor Madden, of course, also spent three years as Robb Stark on GAME OF THRONES, who was tragically murdered in the infamous Red Wedding sequence. The actor is present at a party Discovery Channel is hosting for the Television Critics Association in a 1890s-frontier-style saloon the network has brought to life for the occasion on the back lawn at the Pasadena Langham Hotel. He’ll be seen next as Prince Charming in a new big-screen version of CINDERELLA.

To an observer, at least, certain elements of Madden’s tasks on GAME OF THRONES and KLONDIKE appear similar.

ASSIGNMENT X: Did you think after working up to your eyebrws in the snow with wolves and people trying to kill your character for three years that you just wanted to do more of that?

RICHARD MADDEN: Yeah, I’m into that. I’m into absolute self-torture. No, it was a totally different challenge to GAME OF THRONES. GAME OF THRONES actually kind of seemed easy compared to what I had to go through on this. I kind of pick things based on what’s going to challenge me and be different, and this character is a world apart from Robb Stark. It’s a whole different thing. 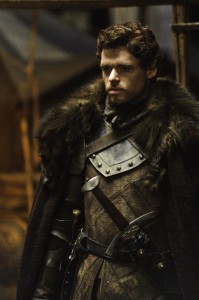 AX: Have you been experiencing a lot of reaction to the Red Wedding?

MADDEN: [laughs] I’ve just had a lot of people coming up and saying [sobbing voice], “Why did you do this?” “I didn’t – George R.R. Martin did.” “Why has this happened?”

There could have been a book they could all have read that might have told them what happened next [laughs, referring to author Martin’s long–published A SONG OF ICE AND FIRE saga].

AX: Did you know about the Red Wedding when you signed on?

MADDEN: Yeah. I knew at the very start. Which was good, actually, because I was so attached to the whole show that by the time it came round, it was really nice that I knew what was going to happen, rather than it being a massive surprise. Some actors flick through the script going, “Do I die? Do I die in this episode?” Whereas I knew Episode Nine, Season 3, I was out.

AX: Was that sequence the hardest thing you’ve done?

AX: Reportedly, you did most of your own stunt work on KLONDIKE, which was shot in Alberta, Canada …

MADDEN: Everything. I was nearly hypothermic one day, and I had huge nosebleeds from just exhaustion, and I had frostbite on my face. When you read the script and it says, “He lies on the frozen lake in a blizzard,” and you go, “All right, that’s fine,” and you’re kind of going next, “Oh, no, actually, you’re lying on a frozen lake in a blizzard.” It was much worse than you imagined. And none of it was studio. All of it was outside in real [ice]. Even the interior scenes, like the scene between me and Abbie [Cornish] in my shack – that was in the shack that we filmed on location, it wasn’t in a nice warm studio. 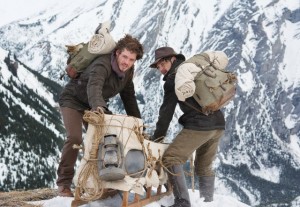 AX: Can you talk about the scene where Bill falls overboard in the rapids?

MADDEN: It was dangerous. We did some tank stuff for the underwater [portions], but we actually had a camera in the water on the day we were doing that as well, and I did throw myself into the rapids. They were real rapids, and we were all on speedboats trying to achieve something really difficult and mad. But it was brilliant. I think that’s what is so good about this show, is that we don’t rely heavily on CGI or VFX for a lot of it. Most of it is, we were actually there doing it. When we were up in the mountains, we were at nine thousand feet. You drive into base in the morning and get into period costume, and then take a snowmobile as far as the mountain as you could. And then you’d hike forty-five minutes to get to the top, [where] there’s no air and you can’t really breathe and then we’d start shooting. And it was the same with the river rapids – I got there and I was like, “Oh, we’re not actually using this, are we? That’s really dangerous.” And then I just kind of convinced myself that it was a studio and we could just turn the rapids off if it got dangerous [laughs] It was the only way I was going to get in them, and I remember being in the boat with Auggie [Augustus Prew, who plays Bill’s prospecting partner Epstein] and we had a couple of scary moments, actually. We’ve got lots of safety people there, but you know, you can’t control nature. I think the show talks about that, and we experienced that firsthand. We smashed this boat into the rocks quite dangerously at some points.

AX: Do you have new sentiments about being outside in the elements after this?

MADDEN: Perhaps a new respect for Mother Nature. I loved the scenery that we got to shoot on.

AX: You’re actually from Scotland. Was it at all difficult playing an American just out of college?

MADDEN: No, it wasn’t. I had different challenges accent-wise – I just stayed in my accent from the minute I got off the plane, I decided, “I’ll just live in it and stay in it to try and make it as authentic as possible.” And the period was a challenge, to understand young men in this time frame, rather than young men today, who are much more open about their feelings and ambitions and desires. It’s a whole different experience, a whole different portrayal of men. [In the 1890s], they don’t have this kind of leeway that men have today, and that was an interesting experience. You were never really a child in that time, [you were seen as] a young adult, and that’s run through this.

AX: And now you’re playing Prince Charming opposite Lily James in the new CINDERELLA, which comes out next year. Was that an easier gig?

MADDEN: You know, I just try and make my choices as diverse as possible. GAME OF THRONES was a really intense, horrible time – onscreen [laughs], it was a good experience to film it. And this [KLONDIKE] was really intense again. So going into CINDERELLA was a totally different challenge. I thought, “This is going to be a breeze, going from KLONDIKE, where, you know, we can’t shoot because the rain machines are frozen up because it was that cold. This will be great. I’ll just be kind of getting my buttons polished, rather than, ‘Can you throw this bucket of mud over me again?’” [laughs] Actually, it was just a completely different challenge, and just as intense as this, but in lots of different ways.