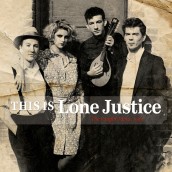 If there was ever a band that deserved more than what they got, Lone Justice was it. They were a band with friends in high places (Tom Petty donated a track to their debut release, U2 invited them to open for them), yet, for various reasons, they never were as big as they should have been.

That said, they were ahead of their time in many respects – marrying countrified passion with rock paving the way for the genre to gain more respect through the 1990s and the Aughts.

Part of the problem with Long Justice is the conflict within the group themselves and the record label who kept pushing them to be more mainstream pop.

Their 1984 debut release EAST OF EDEN stayed close to their rough and ready beginning, an amazing set of roots rockers featuring the awe-inspiring powerhouse vocals of a teen Maria McKee and her incredibly nimble and tight band members Ryan Hedgecock, Marvin Etzioni and Don Heffington.

By the time their 1986 follow-up SHELTER came out, Hedgecock, Etzioni and Heffington were out and the record, while featuring some very haunting moments, gave their label exactly what they wanted – a quasi-mainstream pop record with keyboard flourishes that stripped away a good portion of the band’s pure country rock soul.

Thankfully, Omnivore Records have dug deep in the vaults to uncover a great 12 song release THIS IS LONE JUSTICE: THE VAUGHT TAPES, 1983 which captured the band in their purest form before the major label got a hold of them.

A handful of these songs were previously released on the compilation disc THIS IS NOT MY HOME (“Rattlesnake Mama,”  “Working Man’s Blues,” “This is Not My Home”), the rest have been previously unreleased in this form (though the excellent “Cactus Rose” was issued as a B-side).

The impression this 12-song set gives off is that Lone Justice really loved their country roots. McKee had the voice. She was off-the-charts spitfire, her vocals untamed, energetic and infectious. The band also didn’t hide their affection for country-rock, covering Johnny Cash and June Carter Cash’s “Jackson” and George Jones and Roger Miller’s “Nothing Can Stop Me From Loving You”.

What’s even more amazing is engineer David Vaught recorded these songs direct to 2-track tape and with no overdubs.

There’s a bit of a Dust Bowl era influence in the tracks. From the aptly named “The Grapes of Wrath” with the excellent chorus (“You broke my heart in half/now it’s time for you to taste the grapes of wrath”), “Dustbowl Depression Time” and “Soup, Soap and Salvation”.

Surprisingly, this version of “Soup” is not as potent and raw as the one that was amped up considerably for their debut disc (which I honestly prefer).

Strangely, “Cactus Rose” is the one track that feels somewhat out of place here – far more polished and poppy than the other countrified tracks which is probably why it was selected as B-side.

While most of the tracks sound very polished and clean, there is some artifacting on “When Love Comes Home To Stay” where you can hear the squeakiness of old tape falling apart, but it’s only fleeting and doesn’t detract from having the song included.

The disc concludes with the exceptional arrangement of the classic song “This World is Not My Home,” perhaps one of McKee’s most haunting moments. It’s simply perfect and expertly arranged.

While it makes you wonder where Lone Justice would be if they decided to stay together, perhaps it’s best that they leave behind a very limited disc legacy to preserve who they were and where they ended up. Call it a cautionary tale of record meddling and band egos unable to find a path to forge forward together.

And at least we now have THIS IS LONE JUSTICE as a great testament to their enduring legacy and it sounds so fresh, energetic and exciting, even if does sound like a long lost album from the 1950s.