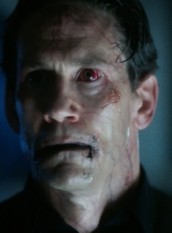 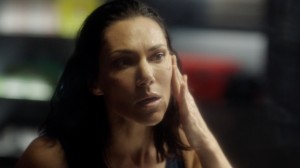 The problem of just a few infected on HELIX just got a hell of a lot bigger.

But that just might be the tip of the preverbal iceberg. As we found out toward the end of the episode, Julia (Kyra Zagorsky) was infected by Peter Farragut (Neil Napier) but the test for the infection that they came up showed she was negative. Obviously with Julia spitting up black liquid that isn’t the case. Meaning the test is not accurate and there could very well be many more members of the facility infected.

That’s bad considering up until this point they are no closer finding a cure then they have been since the beginning and that’s even if they had all the answers, which they don’t. Dr. Hatake (Hiroyuki Sanada) along with his minion from the U.S. Army, Balleseros (Mark Ghanime), are doing a very good job of keeping secrets from the CDC team by covering their tracks with infected monkeys, not giving the team access to all the information and the biggest thing to date by blowing up the communication array leaving them cut off from the rest of the world.

Balleseros and Hatake obviously know what’s happening and have some sort of agenda here, there is no doubt about it. Yet, I’m unclear as to why Balleseros seems to want to help Doreen (Catherine Lemieux). He is playing both sides? Is he just helping her enough to keep her off his trail, even though she already doesn’t trust him and told him so many times. Probably the latter but it is an interesting dynamic to see Balleseros on one hand helping to uncover some of the mystery and on the other doing dastardly deeds to cover it up.

You have to assume at some point everything is going to go even further worse for those infected than it already is and that will be the point where people start dying. “274” is the number of people that Alan Farragut (Billy Campbell) has lost over the course of his career with the CDC and his reflection about having to kill someone with his own hands in this episode and being to blame for the others already infected seems to be a bit of foreshadowing. Foreshadowing to that number increasing as things go from bad to worse in this impressive series on SyFy.