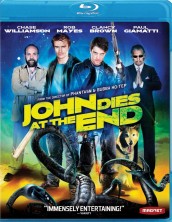 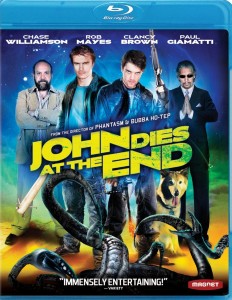 JOHN DIES AT THE END – Woman exploding into snakes. A meat monster coming to life from a freezer. A zombie looking for the axe that killed him. A flying moustache. A bratwurst phone. A mall of the dead. Ginormous hybrid machine creatures. This is just a taste of what awaits you in the wildly entertaining JOHN DIES AT THE END, a bizarre and hilarious film by BUBBA HO-TEP and PHANTASM director Don Coscarelli. Using a black market living drug dubbed soy sauce, Dave (Chase Williams) and John (Rob Mayes) are able to see and fight extra-dimensional creatures looking to enter our world to wreak havoc. The film is a visual feast with tons of wild and outrageous imagery that may or may not be real along with hilarious dialogue and plain stupid events happening throughout.

Dave tells his story to a skeptical reporter, Arnie (played brilliantly by Paul Giamatti), about how he acquired this skill and how the events following changed his life forever. The ending isn’t exactly how you might think given the title but it is rather amusing and just the film overall is a lot of fun. Lots of cool extras too included such as an audio commentary, deleted scenes, making of featurette and more. Highly recommended. 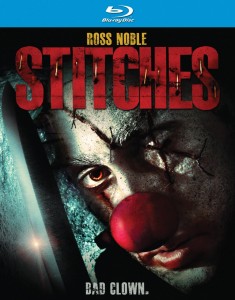 STITCHES – One hell of a good time is had by STITCHES. Filled with clever and incredibly gory kills and some great circus/clown gags it keeps you laughing while satisfying that much needed gore factor that a lot of slasher films tend to do a really poor job at. This film does it brilliantly. In just about every kill the gore and mayhem goes that one step further to ludicrous in the same way DEAD ALIVE does. The plot isn’t much. A miserable clown visits a bunch of kids during a birthday party but when a prank goes wrong, the clown is killed accidently in a hilarious dishwasher-knife-eye combo. Six years later, the same kids along with a host of other high schoolers attend a party and Stitches the clown comes back for the dead to get some clown vengeance. Definitely worth your time and I wish more imports from England had this style of not taking itself seriously while delivering the goods with the blood and gore. 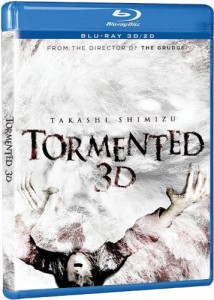 TORMENTED – Evil bunnies, freaky little kids, a crazy Ferris wheel, more evil bunnies and a whole lot of mind f*** is what TORMENTED is all about the latest Japanese horror import from Takashi Shimizu who brought you JU-ON and the really bad SHOCK LABYRINTH, which was touted as the first 3-D film from Japan. This is also in 3-D but again it is pretty bad. In fact, TORMENTED takes many of its cues from SHOCK LABYRINTH in bringing in the bunny doll from that movie that ends up being the main antagonist in this one.  But Bunny horror? Really? Japan is filled with weird sh** but this is ridiculous and the whole is it real or is it a dream thing just wears thin about a half hour into the movie. At least it isn’t little unscary blue kids running around. 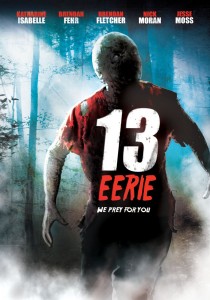 13 EERIE – Not a bad pseudo zombie flick about a group of forensic criminal justice students that go to a remote location to examine the cause of death of some cadavers in the field for a possible internship. The only problem is that the professor choose the location of 13 EERIE a former location of military experiments on a group of life sentence prisoners. Soon it becomes apparent that they are not alone and a group of very ugly and fast former prisoner zombies come looking for a snack. Of course, once you are bitten you become one and soon enough the group’s numbers fall as they look to escape the island that has become a death trap. Starring GINGER SNAPS’ Katharine Isabelle it is worth a look as the tension is pretty good and the gore is decent.