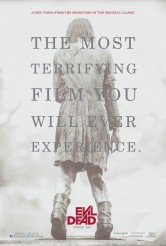 A respectable (and super-gory) remake

The original EVIL DEAD film was made in Michigan in 1981. It launched the careers of its director/writer Sam Raimi, producer Robert Tapert and star Bruce Campbell. The trio reteamed on EVIL DEAD 2: DEAD BY DAWN and the third film in the series, ARMY OF DARKNESS. It’s the latter two that most people remember, with Campbell as the astoundingly dense protagonist Ash smashing plates over his own head when his hand becomes possessed, and later implanting a chainsaw where his arm used to be. The horror was gory, but well-laced with slapstick.

The new EVIL DEAD, produced and godfathered by Raimi, Tapert and Campbell, is directed by Fede Alvarez, who co-wrote the screenplay with Rodo Sayagues. While it has its tongue-in-cheek moments and a sense of humor, the horror is fairly ferocious and no one laughs when things aren’t meant to be funny.

After an opening that seems primarily designed to inform the clueless among the film’s audience that demons are able to shift to normal-looking human form and back again, we are at that horror movie staple, a cabin in the woods. Writers Alvarez & Sayagues introduce an element so ingenious that it’s surprising no major horror movie has tried this before – Mia (Jane Levy) is here to get clean and sober after the death of her unbalanced mother. She is supported by lifelong friends Olivia (Jessica Lucas) and Eric (Lou Taylor Pucci), while long-absent brother David (Shiloh Fernandez) arrives with his girlfriend Natalie (Elizabeth Blackmore). What’s great about the set-up is that it allows the characters to reasonably suppose for a good while that Mia is suffering from violent withdrawal symptoms and demanding to leave because she wants to get back to the city and her drug supplier. We and Mia know differently, of course, but this simple plot device makes sense and ratchets up the tension.

Nothing, of course, can ameliorate the idiocy of Eric reading aloud from a book he finds in the basement – if ever an item looked like it shouldn’t be touched, much less quoted, this is it. Because this sequence isn’t precisely played as a joke and Eric’s compulsion isn’t quite explained, it is simply presented in straightforward fashion, though the manner in which Eric comes by the fateful words is another good piece of invention.

What follows is the kind of full-tilt demonic mayhem that’s more often associated with independent films than major studio offerings. There’s an awesome amount of gore here, as well as a kind of integrity – Alvarez gets commendably close to the core of the genre, keeping things as ferocious as possible without losing sight of our sympathies.

The cast is very good, with Levy (of TV’s SUBURGATORY) giving an especially good performance that goes from soulful introversion to raging drug-deprived addict to pure malevolence and all shades in between. The prosthetics design by Roger Murray and the makeup design by Jane O’Kane are outstanding.

The climax is somewhat confusing – not in terms of mythology, but in staging. The set-up is also a bit perplexing, once we understand it – the prologue seems to have happened long ago, but then we learn that those events evidently happened after Mia, David and their mom previously inhabited the cabin. What happened to the survivors of the earlier onslaught? Will they show up in the sequel? And why did they leave Mia and David’s family photos on the walls? It seems like an enigma that ought to be addressed, but we get no answers on that front

Otherwise, EVIL DEAD does pretty much everything a good horror movie ought to do, given that it’s a remake and there’s only so much innovation we expect. Fans of the original should definitely stay through the end credits.