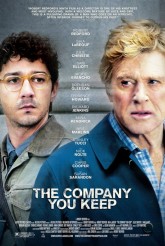 Movie Review: THE COMPANY YOU KEEP

A terrific cast tackles a story that is sincere, if not entirely fresh

A movie that has in its cast Robert Redford, Shia LaBeouf, Julie Christie, Sam Elliott, Terrence Howard, Richard Jenkins, Anna Kendrick, Brit Marling, Stanley Tucci, Nick Nolte, Chris Cooper, Stephen Root and Susan Sarandon is obviously worth seeing, no matter its content or execution. THE COMPANY YOU KEEP, based on the novel by Neil Gordon, with a screenplay adapted by Lem Dobbs and directed by Redford, turns out to have a decent storyline and a general air of intelligence, though it’s so earnest that this quality would make it seem dated, even if it weren’t set in 2003 (when Gordon’s novel was published) and dealing with events that occurred about three decades earlier.

Seemingly average married suburban mom Sharon Solarz (Sarandon) is arrested by the FBI for being part of the Weather Underground, an antiwar group of the ‘60s and ‘70s that committed robberies and bombings that caused civilian deaths. The arrest piques the curiosity of newspaper reporter Ben Shepard (LaBeouf). Ben’s persistent probing leads to upheaval in the life of nice-guy Albany, NY public interest lawyer Jim Grant (Redford), a single father to young Isabel (Jacqueline Evancho). Jim winds up having to head West to confront his past, including some people who feel very differently about the old days than Jim does.

Although the two films are different in their attack, THE COMPANY YOU KEEP is reminiscent of 1988’s RUNNING ON EMPTY. The new film suffers by comparison, only partly because 1988 was a lot closer to the ‘70s than 2003 was, let alone the present.Redford and Dobbs are interested in having a discussion about what happens when people of seeming goodwill turn to violence and whether a life can be lived fully when it contains massive secrets. However, they aren’t able to create the necessary atmosphere of both immediacy and timelessness that this kind of flashback tale requires. Additionally, though the stakes are high, there are so many different aspects to what’s going on here that the focus becomes diluted. It’s realistic for a lot of factors to go into anyone’s decision-making process, but when some are abstract and some are concrete, we need to feel those abstractions on a personal level, or else the issues become very slanted. We intellectually comprehend what’s going on here, but we don’t feel it viscerally.

The story is further bogged down by using Ben as a narrative device, since everything has to switch gears to incorporate him and it doesn’t feel as though the filmmakers are especially interested in his character’s dilemmas.

Redford easily persuades us of Jim’s integrity and the near-impossibility of anyone pushing him around; in these respects, he has cast himself well. LaBeouf gives Ben the mixture of eagerness and ambition that Ben requires, though the script indicates that he’s more self-serving than he seems – he really is just doing what reporters do. Christie is stunning and assured and Cooper is terrific as Jim’s angry brother.

THE COMPANY YOU KEEP probably would have played better in the ‘70s, when people felt passionate about the topics it covers. It may have been made now, but in its style as well as its content, it feels like something from an earlier era.