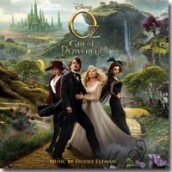 Long before fairy tale movies were in vogue, Danny Elfman was applying equal parts enchantment and foreboding to such fractured Tim Burton fantasies as EDWARD SCISSORHANDS, THE NIGHTMARE BEFORE CHRISTMAS and BIG FISH. So it’s no surprise that a filmmaker prone to dark, deceptively kid-friendly adventures would start the recent trend off with ALICE IN WONDERLAND, even if it was a film that pretty much went down the rabbit hole. However, Elfman’s strikingly themed score stayed above the helter-skelter effects fray with its clever plays on English propriety. Now, Elfman’s music truly gets to fly in the genre for Sam Raimi’s prequel voyage to Oz with OZ THE GREAT AND POWERFUL one that thankful reunites the composer and his SPIDER-MAN director. It’s a tall tale that pays off far better on the filmmaking count, while inspiring Elfman to reach further heights of rambunctious storybook enchantment that proves his music was never in Kansas to begin with.

While not quite as sing-song memorable as ALICE‘s theme, Elfman has got another winning melody in the purposefully blustering motif for a con-man “wizard” who ultimately finds the magic within himself. There’s even more than a bit of original OZ composer Herbert Stothart’s wonder as Elfman transitions from music box bells to romping circus music for organ and chorus before the glorious orchestral statement of his OZ theme emerges in the “Main Titles.” It’s wondrous stuff that sets very high expectations of the trip to Emerald City to come, a journey that Elfman makes very enjoyable indeed with all the fantasy score pre-requisites of siren-voices, rapturous strings and villainous percussion. But this is a composer who’s gotten his name by rarely playing it straight. And while there are moments of beautiful calmness that sink in the AVATAR-worthy painted environment, from waltzes to a heartbreakingly touching bell theme for a China Doll, OZ more often than not has an antic, exciting energy that’s more like a kid ripping through the pages of a storybook than pleasantly thumbing at it. There’s fun pomp and circumstance for the con man anti-hero, even as Elfman steadily humanizes the vulnerability within him. He also uses a violin to bring out the pathos of a witch who wasn’t so wicked once upon a time, even as her music shrieks with some of the most fiendish delight that Elfman’s had since DARKMAN and THE FRIGHTENERS.

Disney’s made it a point to not go anywhere near the starstuff of the one and only OZ,  so don’t expect any attempts at another “Over the Rainbow,” let alone Elfman bringing a Boingo style rock beat to “We’re Off To See the Wizard.” But given Raimi’s screwball humor, the one tune offered is a joke to what we won’t get in “The Munchkin Welcome Song.” A way-too jolly marching band introduces its goofily catchy verses (done a couple of octaves lower than Elfman’s one-man Munchkin band for CHARLIE AND THE CHOCOLATE FACTORY) before the amiable little people are cut-off at “Yo Ho,” perhaps the most thankfully stopped ballad since a prince tried to warble a ballad in MONTY PYTHON AND THE HOLY GRAIL.