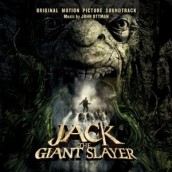 Make no mistake that composer-editor John Ottman can adventurously lighten up when in the sole musical seat to provide dynamically fun work on ASTRO BOY and two FANTASTIC FOUR flicks. Yet when he teams up with director Bryan Singer, the results usually skew towards the dark side, from the outrightly oppressive VALKYRIE and APT PUPIL to the brooding super-heroics of X-MEN UNITED and SUPERMAN RETURNS. So it’s a pleasant surprise that the duo have chosen an entertainingly inconsequential project like JACK THE GIANT SLAYER to finally sit back and have some fluffy, creative popcorn with. Yet ironically, JACK impressively proves itself as one of Ottman’s weightiest-lightweight scores, his gargantuan music conveying all the fury of a towering creature racing behind you with cannibalistic intentions. But then, what great fairy tale score would be complete without more than a bit of fright, especially when it comes to one involving ugly bone-gnashing behemoths?

JACK is huge in every sense of the musical word, as a spectacularly recorded orchestra plays one danger-filled crescendo after another. Nerve-grinding percussion bangs out enough primal power for a horde of troglodyte warriors, while glorious choral hosannahs make the cosmic sacrifice that Ottman provided for the Phoenix in X2 seem like a spark. But while it possesses enough sound and fury to crush the wee ones into their chairs, what the gloriously uninhibited music of JACK THE GIANT SLAYER has going for it above all is a terrific, overpowering sense of melody that never loses its human footing on its way up the beanstalk. Given a great theme that ranges from the sweeping heights of heroism to sweet romantic vulnerability, Ottman always keeps emotional sight of the plucky lad, even as he’s visually dwarfed by the fantastical surroundings. It’s been a while since a fantasy score had this kind of orchestral bravado, a rampage of blasting melody that gives the image of Ottman breaking his chains and rushing forward to provide havoc with an equally powerful melodic heart.

JACK THE GIANT SLAYER has allowed Ottman’s musical abilities to rise to new epic heights while remaining no slouch in the cutting chair. And there’s even a fun little bit of “Fe Fi Fo Fum” to boot as a giant sings of his desire for a Jack snack, a minor variation on the carnivorously dark sense of humor that Ottman’s score revels in.