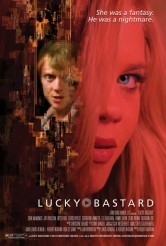 “Found footage” is a popular horror subgenre these days. LUCKY BASTARD applies it to a thriller that is not supernatural and not exactly horror, though it’s right on the border, using the format deftly to draw us into the action right across the room. It’s unnerving and unsettling, because we like most of the readily credible characters and also because of the structure. We’ve seen plenty of stories where an outsider enters a closed-in group, either menacing them or being menaced by them. We seldom see a tale like this one, where both the group and the outsider are relatively innocuous on their own, but with one turning the other into something unstable and dangerous.

Director Robert Nathan and his co-writer Lukas Kendall set their story in a world that seldom gets depicted in narrative features outside of BOOGIE NIGHTS: adult filmmaking. We know immediately that something horrible has happened, as police find several corpses inside and on the grounds of a suburban L.A. mansion. (The filmmakers establish early on that the house has been outfitted with equipment for a reality show that filmed there, which explains why the cameras keep rolling whether or not there’s anyone operating them.)

Cut to a week earlier. Producer/director Mike (Don McManus) operates a number of adult Web sites. One, Lucky Bastard, offers the average male fan the opportunity to have sex with an adult film actress. One of Mike’s stars, the pragmatic Ashley Saint (Betsy Rue), has worked for all of Mike’s sites except this one – because, as she says, she doesn’t want to work with amateurs. Mike offers Ashley a sizable chunk of money to make an exception and allows her to choose her partner via Internet video submissions. Ashley, still skeptical, decides on Dave (Jay Paulson), an apparently mild-mannered young man who is delighted to get close to the gorgeous performer. However, the experience isn’t what Dave expected and Dave isn’t what the company expected. As disappointment rises and egos get shredded, things go from awkward to angry to catastrophic.

There are elements of LUCKY BASTARD that certainly tie into the adult film business, particularly the gulf between Dave’s desires and the businesslike attitude of everyone else. However, it’s easy to imagine the same kind of scenario, with fame, money or any other desirable but unearned element taking the place of sexual congress – putting someone in a situation that’s designed to humiliate them so that they can get a chance at a facsimile of something they want has become an entertainment staple. The outcome LUCKY BASTARD posits seems sadly credible.

The cast is very strong, with Paulson going from Everyman innocence to outrage fluidly. Rue is charming, smart and sympathetic. McManus makes Mike a very recognizable Hollywood type, glib and proficient, with glints of pain and weariness peeking through the smooth exterior.

However, for thriller fans who can take some tough fare – especially those with deep suspicions about “reality” programming – LUCKY BASTARD is a real find.