The actor talks about playing romantic comedy and producing sci-fi 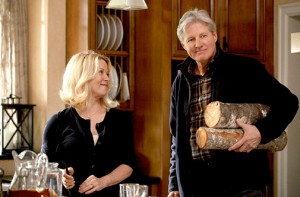 Bruce Boxleitner is sitting in an empty function room at the Beverly Hilton, giving one on one interviews during the Television Critics Association press tour. He takes a throat lozenge, explaining that he’s fending off a cold. “I was down at Comic-Con – that’s why I’m just totally fatigued, I never stopped for four days, and then flew right to Canada and went to work. So these are good problems to have.”

Boxleitner is famed for his work in science-fiction films and TV – he’s the title character (and his human doppelganger Alan Bradley) in TRON and TRON: LEGACY, valiant space station commander John J. Sheridan in the BABYLON 5 TV series and telefilms and the chief of the government facility that denies having any alien artifacts in 51. The actor, originally from Elgin, Illinois, also has Western credentials, having starred as Luke Macahan in two separate miniseries of HOW THE WEST WAS WON and won his romantic spy spurs in as Agent Lee Stetson in four seasons of THE SCARECROW AND MRS. KING opposite Kate Jackson.

Now Boxleitner is costarring in Hallmark Channel’s series CEDAR COVE, Saturdays at 8 PM. Based on the best-selling novels by Debbie Macomber, CEDAR COVE is about a close-knit coastal town in the American Northwest. Boxleitner plays Bob Beldon, who with his wife Peggy, played by Barbara Niven, is the new owner and manager of the local bed and breakfast, dubbed the Time and Tide. Other CEDAR COVE regulars include Andie MacDowell as Judge Olivia Lockhart, Dylan Neal as Olivia’s love interest Jack and Teryl Rothery as Olivia’s best friend Grace. Boxleitner’s Bob is a member of Alcoholics Anonymous, something he shares with Neal’s character Jack.

ASSIGNMENT X: How much a part of Bob’s character is his recovery?

BRUCE BOXLEITNER: He goes [to AA meetings] with Jack – they go fishing a lot, but don’t bring anything back. That’s what kind of gets him out there. I think we haven’t really delved into it and I love his background in the book of CRANBERRY POINT – it’s about Bob and Peggy. I’m just looking at it as, he’s helping this slightly younger man on his road. I think he’s just a man who deals with day by day – that’s what I keep telling Jack, it’s day by day, and we’re all one drink away from wanting to go back. 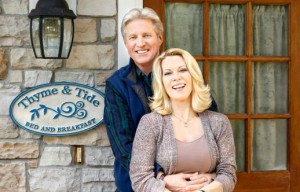 AX: Given all your work in science-fiction shows with other actors who are covered in prosthetics, is it refreshing to be on a series where you know what all of your costars actually look like?

BOXLEITNER: [laughs] Yes. It’s different. I’ve got in development a science-fiction epic series [LANTERN CITY], not for me to be in necessarily, but to produce, I’ve got a great production team, so I still have my hands in science fiction. The reason I like doing this show is, I’m not chasing bad guys, I’m not getting shot at, I’m not flying through space. This is something that, at Bruce Boxleitner’s time in his life, Bob Beldon is a very comfortable fit. And I want to be comfortable right now. This character supplies enough that it keeps me intrigued to see where we’re going to go with it. I get to do little light-hearted, more comical things in this as well.

AX: Obviously there aren’t any spies here, but does the romantic comedy aspect of CEDAR COVE hark back to SCARECROW AND MRS. KING for you at all?

BOXLEITNER: Yeah, very much so.

AX: Had you missed getting to do light material at all? You’ve done some along the way …

BOXLEITNER: Yeah, but not much. I [did] miss it, because not only is it fun, it makes the day go by really well and I feel good in it. This is an unusual piece in that I’m so happy there was a big reaction to the pilot. I wasn’t in the pilot – the pilot was a year ago. Some changes have happened cast-wise – obviously, Barbara and I. But I think the television climate today, there are some really great shows, but for the most part, [in CEDAR COVE], you aren’t going to find a lot of violence – there’s no violence whatsoever – or a lot of sexual things. It’s a safe place to come. I just want compelling characters and storylines to watch, I don’t necessarily have to have all that added stuff to make it interesting. Serial killers are now the rage again and now we have a dozen of them. You know what I’m saying? Television just copies everybody. This is fairly – I don’t want to say “old-fashioned,” I say it with a smile. It reminds me sort of PEYTON PLACE and those things I grew up with as a boy that were on television that were very stable.

AX: But even PEYTON PLACE had murder and adultery …

BOXLEITNER: What happens to us in our second episode – we have a guy who comes to stay at our inn and [Peggy] goes in to bring breakfast to him, which is guaranteed at the Time and Tide when you stay there, you get scones and coffee in the morning. And he’s dead. We have a mystery as to who this guy is and why did he die there? How did he die? It didn’t look good – he showed up in the middle of the night, bloodied up. So there’s that kind of thing, but it never gets into [being gory and violent]. Our local sheriff tries to figure it out, I try to figure it out – sort of a small hysteria starts to happen as to who this guy was, what was his real motive, who was he?

AX: How do you enjoy playing half of a couple again?

BOXLEITNER: I’ve been working with the wonderful Barbara Niven, who was cast right along with me. We’ve got, I think a great, fun chemistry. These two characters, Bob and Peggy, might be a little goofier than [readers/viewers] remember in the books [laughs], but we do have some very serious moments. I go to work with all these beautiful ladies, we have some great guys. It’s something that’s kind of a women’s genre, I guess you could say that, we’re [Boxleitner and Neal] the men in their lives. I guess I’m now aging into those kinds of roles and that’s fun.