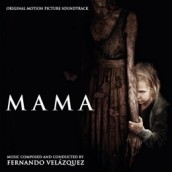 If hell hath no fury like a familial ghost scorned, then one quickly rising composer who knows how to play a potent mix of the demonic and paternal is Spain’s Fernando Velázquez. First impressing with the chilling score for a mother’s encounter with ghostly tykes in THE ORPHANAGE,  and then opening up a world of satanic suspense within the confines of an elevator for DEVIL, Velázquez has lately explored the real-life terror of THE IMPOSSIBLE, wherein a family’s bond overcame a Tsunami’s catastrophe.

The elements of shock and emotion mix very well for MAMA, who’s not exactly welcoming of her kids’ new caretakers. A composer who’s proven he knows how to mix fright and melody to maximum emotional effect, Velázquez plays a child-and-ghost game with the sympathy of tender strings, pianos lullabye bells and children’s voices, only to jump in with hair-raisingly dissonant “Boos!” But for the most part, MAMA is done with chilling subtlety where the ghost of such great horror melodists as Jerry Goldsmith and Christopher Young are very much alive.

Climaxing MAMA is a tour de force thirteen-minute cue, self-explanatorily titled “Final Reel.” Where many genre scores can become blaringly wall-to-wall for the big showdown, Velázquez terrifically brings together all of his dramatic and ghastly motifs together, charting the specter’s emotional progression from rage to religious deliverance as the score reveals its true, epically supernatural intensions as kid’s voices become a biblical chorus, while his restrained use of strings turn into a Straussian symphony. It’s a textbook example of extended musical storytelling that takes MAMA to a new, thrilling dimension with a score that firmly marks Velázquez as a major talent capable of treading the line between fear and feeling.

Clink on the link to buy the MAMA soundtrack