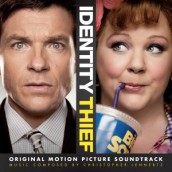 Ask Danny Ocean and David Holmes, and they’ll tell you that r & b funk goes with comic crime like a blowtorch and a safe, or in the case of IDENTITY THIEF‘s Internet skills and some poor shmuck’s I.D. There’s also no better way to play a sad sack in way over his head in the white trash boonies than a rocking country-western sound, as Danny Elfman more than proved with MIDNIGHT RUN.

Both musical caper sounds combine to rambunctiously enjoyable effect for Chris Lennertz, who’s paying far more homage to these styles than scoring a big rip off. Where he’d applied the similar sound to HORRIBLE BOSSES  last time out for director Seth Gordon, IDENTITY THIEF musically tops the Hammond organ and swamp harmonica swing by offering a lot of surprises beyond the retro shuffle. Namely, Lennertz gives far more of a scored feel to these shenanigans, creating an emotional gamut that runs from sympathetic guitar licks to menacing strings and sinister metal rock that bring real danger to the jam session chases. It’s an approach that gives IDENTITY THIEF and edge without losing any of its fun energy, showing there are still ways for the hip, band approach to steal new ideas for the cinema’s unending con games.

Clink on the link to buy the IDENTITY THIEF soundtrack