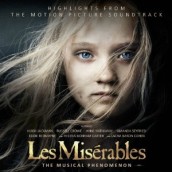 Even when musicals deal with less savory subjects like dueling New York gangs or starving English orphans, there’s always a romantic layer of production polish to give our delicate sensibilities a comfort zone from the muck and grime of real life, but by immersing viewers in a sewer of excrement along with its lovestruck duets, LES MISERABLES shouts aloud that it’s a stage-to-screen game changer. There’s an unheard level of primal scream singing here that throws us into the gutter along with Victor Hugo’s period Parisians, who sing about the lack of justice (or the psychotic belief in it) for endlessly elongated close-ups, all while the film attempts to carry a near-continuous tune. But while this operatic speak-singing isn’t “pretty” in the traditional sense, musician Claude-Michel Schonberg and lyricist Alain Boubili’s phenomenon packs an undeniably impressive emotional wallop that benefits from sometimes raspy delivery and squelched notes- as would be the case of any actor recorded live trying to belt out a ballad while defending a barricade or single-handedly hauling a ship from the sea.

As the only “Les Miz” star with a Tony next to his loaf of bread, Hugh Jackman gives Jean Valjean’s numbers an impressive, defiant authority that’s quite a change from his stage turn as “Boy from Oz” Peter Allen. But even when his voice soars in soliloquy, Jackman is sure that his delivery isn’t too polished. Delivering an incredible one-shot performance of “I Dreamed A Dream,” Anne Hathaway redefines acting as performance for a heart-ripping song that will likely win her the Best Supporting Actress Oscar. Better known for his band 30 Odd Foot of Grunts, Russell Crowe certainly has the anger thing down for Javert. And while some have lambasted him for that star golden star throat thing, Crowe befits himself admirably as the unyielding French supercop, especially when his purpose is suicidally ripped away. In a far better musical than her last Abba-centric singing turn in MAMMA MIA, Amanda Seyfried shows her suitably angelic talents as Cosette, while Eddie Redmayne’s voice is a bit less certain as her instantly smitten revolutionary beau Marius. But if there’s one performer here with the Miz street rabble cred, then it’s Samantha Barks, whose jilted Eponine just might have the heartbreaking highlight with “In My Life.” Otherwise, the orchestra does a fine job with Schonberg’s music, which swings between tunes that stubbornly refuse to fall into by-the-numbers Broadway, and others that deliver comedic toe-tappers (“Master of the House”) to rousing show-stoppers (“Red and Black”), with the multi-vocal march to battle in “Drink With Me” serving as “Les Miz’s” ersatz spin on Sondheim’s “The Rumble” from WEST SIDE STORY.

The most successful “show” soundtracks are able to musically tell a story in song. Given that its nearly three-hour running time is mostly done with the latter, the LES MISERABLES’ album is impressive for how well it sums up the film’s epic emotional arc, and best numbers within the space of 65 minutes. Much of them will no doubt be copiously replayed by the movie’s fans, as well as the show’s decades-old Broadway cult, who will hear their beloved highlights given to a new, cinematic level of resonant rawness here.

Clink on the link to buy the LES MISERABLES soundtrack