glee review the role you were born to play

Finn, Mercedes and Mile return to help out with the school play in a solid episode 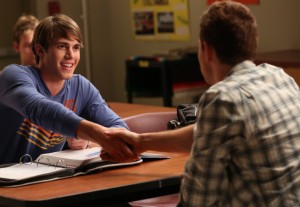 After a month-long hiatus, GLEE finally returns with its identity crisis still in check. Is it a show about moving forward or moving backwards? How can it keep its graduating class a part of the show, yet introduce new characters to replace them with.

Ironically, I’ve been more engaged with the new characters than the old ones, which is a testament to the writers for finding other storylines to milk on the show.

Still, GLEE continues to make dramatic tonal shifts for some characters after other things have already been established in previous episodes. It’s to be expected with the show, but at least with “The Role You Were Born To Play” it’s not so annoying you want to rip the cord out of the TV and never watch the show again.

Surprisingly, this episode has no New York storylines – it’s all McKinley High and the preparation for the school play this year which is GREASE.

Finn (Cory Monteith) still reeling from his break-up with Rachel (Lea Michele) and being discharged from the Army is now a mechanic at his step-dad’s auto shop. That’s when Artie (Kevin McHale) begs him to be a co-director of the school play and it results in Finn taking over the Glee club from Mr. Schue (Matthew Morrison) by episode’s end (or at least temporarily).

We also see the return of Mike (Harry Shun Jr.) and Mercedes (Amber Riley) to help with the school play too (really – I thought they had other things to do than to return to Lima, Ohio?)

Other stories include the new Santana, bitchy cheerleader Kitty (Becca Tobin) still vying for the affections of Jake (Jacob Artist). Marley (Melissa Benoist) having chemistry with newcomer Ryder Lynn (Blake Jenner) and Wade (Alex Newell) desperately wanting to play Rizzo in the school play even though he’s a dude that dresses as a girl.

The old, mean Sue (Jane Lynch) returns with a new crusade – preventing Wade from being Rizzo in the new school play because she knows it will result in more ridicule and hatred. We also find out that Sue’s baby was born with some problems (I believe this is the first time we heard this, but it’s been a month since the last episode, so maybe I forgot).

And Mr. Schue and Emma (Jayma Mays) work through their own bump in the road – he wants her to come with him to D.C. and she wants to stay home with her school kids and he agrees to be separated from her for a bit.

Overall, a solid episode, with the GREASE parts going to the right people and newcomers Marley and Ryder getting the roles of Sandy and Danny, respectively.

I was unsure if GLEE was going to be able to continue with so many characters moving on, but the writers have really done a great job with Jake and Marley. Marley as played by Benoist and she’s adorable and just so refreshing on the show. She’s an innocent, not corrupted by anything, not stupid and not overly ambitious that she wants to crush all those around her. I also think Ryder is going to be a great addition – Jenner brings something new and interesting to the mix too.

Still, the whole Wade subplot seems a bit redundant. I thought his whole being comfortable with who he was already addressed, but this episode, it seemed like he took a step back. And Sue getting so angry with him being Rizzo seems out of character with the nicer Sue we’ve seen this season so far.

Overall though, GLEE seems to be working quite well. If they can keep the new characters interesting and find a way to lessen characters that have moved on, I think it would be best, but in the meantime, it’s nice to see some old faces even when the show is trying to shoehorn them in with mixed results.