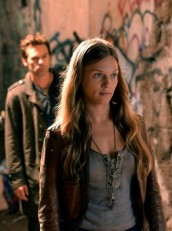 The promos for this week’s REVOLUTION, “The Children’s Crusade,” billed this to be the episode where all the answers you want about the power going off are explained.

Haha, that’s funny because none of that happened.

Yeah, we got some clues about why it happened – the Department of Defense (or specifically Randall from that organization) teaming up with a small research company in which Rachel (Elizabeth Mitchell) was one of the founders. Not really something they wanted to do but with funding tight they had to branch out. We learned that the device was originally supposed to power things through some sort of green energy but instead did the opposite.

But what they showed us was a small area being impacted not the entire Earth. There was no scene that actually explained how a device big enough to do that sort of damage could be constructed, why they did it and what the end game is. Also, what’s with the triangle shaped devices and how they can power things at certain times and why are there 13 of them? Why are the people who have them trying to keep them separated and not have the power turned back on? Those, NBC, are the answers we thought you would be providing us.

This episode provided none of that. So billing it as the episode that “answers all the questions about the blackout” is at best false advertising.

Instead we got the back story of how Rachel was one of the people behind the original developments of the device that turned off the power but her husband obviously has something to do with it given him being aware of it in the “Pilot.” We know the DOD also plays a role and that the person involved with getting the technology, Randall, is still alive and kidnapped Grace, who has one of the triangle devices (Randall has another, a third is with Aaron (Zak Orth) and a fourth with the dude the Militia has and is torturing – leaving another eight we haven’t seen).

The rest of the episode was just another run-of-the-mill episode where Charlie (Tracy Spirdakos), Miles (Billy Burke), Aaron and Nora (Daniella Alonso) run into a gang of kids that had their leader taken by Militia. So Charlie infiltrates the training grounds in order to get him back and screws it up again leading to yet another save by Miles. Rinse repeat. Rinse repeat.

What’s amazing is that they show all these kids forming into a clan and depending upon each other yet there will be no follow through more than likely. Does Miles and Charlie just let them go back to their abandoned building to continue to exist and be terrorized by militia or are they taking them to a rebel refugee area? We never know and because of that we don’t care about any of the people we have just spent an hour with, making it pointless to even have an episode dedicated to them.