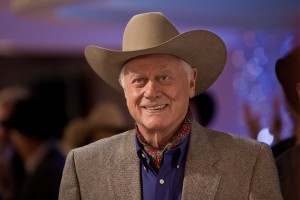 Not many shows can be resurrected so beautifully as DALLAS has been. The new cast fits nicely in with the old cast and together they are creating one of the best new dramas in years. Josh Henderson leads the cast as John Ross perfectly. He has the sinister DNA and charming personality of his dad J.R. (Larry Hagman) which allows him to woo those around him and yet he’ll be the first to tell you he’s a good man just doing what Grandpa Jock Ewing would have wanted.

The blackmailing and threats are commonplace around Southfork, and that’s coming from family members! Who needs enemies when you have family like that! Christopher is blackmailing John Ross. John Ross blackmailed Rebecca. J.R. is blackmailing nearly everyone in Texas. And yet somehow, somewhere business gets taken care of, temporarily, in between the sheets and the deception.

Christopher’s ex Rebecca (Julia Gonzalo) is trying her hardest to make up with Christopher (Jesse Metcalfe) to no avail. Although, she does earn some good graces from him when she discovers a document stating the minerals beneath the land are still owned by Bobby.

So, the drilling is on, then off, then on again … and then, well, apparently off again. The tug-o-war between Bobby and John Ross is endless, both pursuing ways in which to outsmart the other while dear old J.R. is out in Vegas, keeping a cool eye on his lifelong enemy Cliff Barnes (Ken Kercheval).

The essence of the DALLAS from years past is in tact. The writers and producers have done an excellent job of modernizing a show that actually works in these times.  No force feeding here. The timing is right and the show is a hit. Let’s hope no one screws it up. And just like the famous cliffhangers of yesterdays we learn at the tail end that Rebecca is pregnant – no surprise there. And keeping with the drama, yes, it’s fade to black.