The soundtrack adventure has truly begun 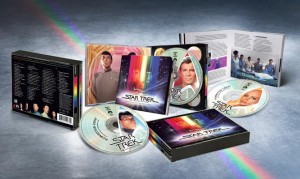 In the blaze of Holy Grail soundtrack releases that just might finally represent the glorious supernova of physical CD’s, it’s easy to start taking one treasure after the other for granted. But when a title of truly momentous proportions is unearthed, it’s not only time to give thanks and bask at what might be the last best time in history to buy movie scores, but to also marvel at the power of music itself beyond trying to pick up the seemingly unceasing cascade of “bottle caps” – as Jerry Goldsmith liked to call the rewards of the insatiable collector mindset.

Given that note, it could be said that if La La Land Records’ breakthrough into the Paramount mountain existed to excavate one title, and one title alone, then it would be 1979’s STAR TREK: THE MOTION PICTURE soundtrack. In the 32 years since its vinyl release on CBS Records, we’ve basically only tasted the wonders of Jerry Goldsmith’s full, sci-fi symphony, its scope made even more tantalizing by a somewhat expanded Sony Legacy CD release in 1999. But now that La-La Land has at last given us Goldsmith fiends three discs of ST – TMP (adding up to a running time of nearly four hours), listening to this hypnotic, rapturous epic collectively puts diehard Trekkies, Jerry fans and score admirers into those godforsaken skintight uniforms, watching in awe as one section of V’Ger is revealed after the next, all finally adding up to the movie score equivalent of cosmic rapture.

Amidst a resume of such brilliantly bombastic genre scores as TOTAL RECALL, LEGEND and SUPERGIRL, STAR TREK: THE MOTION PICTURE likely stands as the biggest Goldsmith of them all. Not so much “big” in the measure of how much massive symphonic, and electronic weight that Goldsmith moves about, but in the sense of the ideas communicated by the sheer, elegant force of his music- the feeling of awe at touching, and communicating with the unknowable that sci-fi (not to mention religion) is about at its headiest core.

It’s this massive, smart scope that similarly distinguishes this franchise entry as the most adult “motion picture” of the bunch before J.J. Abrams came long with equal production values, even if his hugely enjoyable film didn’t exactly offer a similarly cerebral plotline. For as opposed to engaging in phaser-blasting and drop kicks, the slow moving, at times snail-paced attitude of “ST- TMP” demanded that its audience actually think about confronting a supreme being (and in a far less juvenile fashion than the guilty pleasure God hunt of the Goldsmith-scored STAR TREK V). Goldsmith ‘s music is that observer here, bringing on a musical sense of non-confrontational wonder that’s caught between awe and powerless apprehension, heroically propelled along by a gallivanting, afterthought theme whose latter use as THE NEXT GENERATION‘s motiff has ironically ensured this score’s eternal afterlife- with a percussive Klingon theme becoming that race’s barbarically noble sound as well. 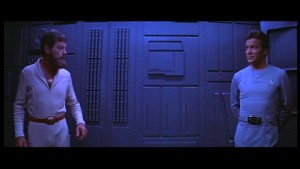 The positively Vulcan-like approach of ST- TMP is both the film’s greatest strength and weakness. For though there would be the natural cheer of bringing back these much loved characters from the abyss of TV cancellation, THE MOTION PICTURE doesn’t exactly brim over with the emotion and camaraderie that made the original series so endearing (we’d have to wait until the buttoned-down, tear-inducing “Wrath of Khan” for that). Given the purposefully analytical coldness of V’Ger’s god-machine and two super-intelligent alien leads in Spock and Ilia, Goldsmith’s score is all-important at bringing warmth and humanity to TMP, from the lush romance of Ilia’s theme to a joyfully elongated dance of Kirk re-entering the Enterprise and the exhilarating, full-throttle warp of the orchestra and Federation-military percussion leaving our solar system.

Once the Enterprise reaches the cosmic cloud that’s threatening Earth, much of the film plays like a slightly more fathomable take on 2001‘s “Stargate” sequence, as the crew look with mouths agape at the incredible light displays and model work that swallows their ship whole. In no other series entry is music so important in that respect (especially since its sound effects weren’t completed in time), with Goldsmith carrying entire dialogue-free, effects show-off sequences. Carried on floating clouds of hypnotic melody, Goldsmith’s “V’Ger” music plays as if we’re in a haunted church, full of shimmering string gestures, tranquil piano and harp, a booming, Bach-like Wurlitzer organ, eerie electronics and the inimitable, reverberating percussion of The Blaster Beam. 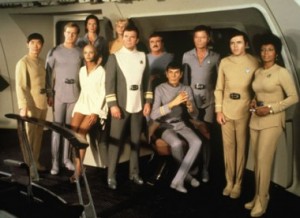 But beyond capturing the essence of otherworldliness, Goldsmith also conjures V’Ger as a character itself- a lumbering, fantastical entity that’s at once all and nothing, rumbling for the need to be completed by the almighty.

It’s a musical quest for “the other side” that would take on far more horrifying shape in Goldsmith’s latter score for POLTERGEIST. Goldsmith’s score (abetted by Classic Trek composer Fred Steiner) continues to build with breathtaking, brooding waves of symphonic-electronic majesty as the Enterprise’s collected brainpower tries to figure out a way to stop the all-powerful, yet unknowing machine. In this way, “TMP”’s score works brilliantly as one revelation after the other, a sense of musical discovery that plumbs the space between darkness and the unfathomable. Goldsmith’s cross between spectacle and headtrip reaches its Zenith as Spock’s space walk speeds him into the grandeur of V’Ger’s visual memories, all before the spiritual big orchestra and Blaster Beam bang of V’Ger’s Voyager-unmasked identity merging with the human element. 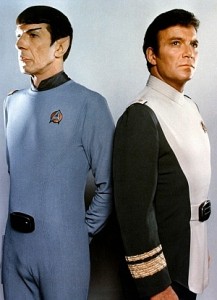 It’s all stirringly harmonious starstuff, working in the way that the best classical symphonies do as movements and themes build and converge towards a transcendent climax, with a melodic poetry comparable to Claude Debussy. It’s what makes TMP arguably stand as Jerry Goldsmith’s most stupendous musical achievement in terms of craft and construction among many such scores, especially that all of the cues (and then more than some) are here. At last, we get to hear Goldsmith’s use of Alexander Courage’s TV theme within his own score, more of Ilia’s romantic warmth as possessed by V’Ger’s circuitry, and the complete nine-minute version of “Spock Walk.”

Particularly interesting is the “unused early score” on Disc Two. The equivalent of a first playback that didn’t go so well (relatively speaking), Goldsmith’s initial take on “TMP” is busier, and somehow a little less elegant. “The Enterprise” flyover is full of sweet, happy nautical gestures, yet minus the main theme that would pull it, and the rest of the score together. Once inside V’Ger, the first stabs at “Micro Exam” and “Games” seem just a bit lighter and less dangerous. Rarely has a director’s suggestion to get a big theme going, and to get a bit darker, had such an obvious impact. We can be thankful that Goldsmith’s lack of hubris towards his “Sand Pebbles” director Robert Wise made the composer go back to the drawing board and pull true greatness out of a score that was already more than good.

With the rest of the second CD complemented with the original “ST- TMP” CBS album (even then a satisfactory, well-sequenced listen), CD 3 is given to numerous alternate cues and film versions, including a less playful take on “Spock’s Arrival,” a longer “Overture” and the memorable “Meld” ending which has the Enterprise fly out of V’Ger with an ever-expanding Cosmic Beam effect.

And given access to all audio that is “TMP” music, La La Land wraps up their odyssey with some real chestnuts, including the raw, history making sessions of Jerry Goldsmith giving jovial instructions to his orchestra as they resoundingly play musical history with the first takes of his main theme, some more successful than others. The Blaster Beam gets its time in the solo spotlight as its inventor (and former “Star Trek” actor Craig Huxley) shows off the outer limits of his inimitable instrument (to be used in such other memorable genre scores as THE BLACK HOLE and BATTLE BEYOND THE STARS before being resurrected by Hans Zimmer for THE THIN RED LINE). And this being 1979, we of course get Bob James’ extended, brassy disco take on the main theme (which thankfully didn’t find a spot on the original album, a la “Love Theme from Coma”), not to mention then-teen heartthrob Shaun Cassidy’s vocal take on “Ilia’s Theme,” which manages to be more pop sweet than bubblegum painful to our certain generation’s grown up ears, even as he tries to warp at points into the Tom Jones Neutral Zone.

Given the decades of building up to perhaps the most feverishly awaited Grail score next to Alex North’s SPARTACUS, STAR TREK: THE MOTION PICTURE resounds with the love and technical polish of an already savvy team who’ve unwrapped their Golden Ticket, especially reissue producer and Goldsmith specialist Mike Matessino (ALIEN), here working with TMP‘s original album producer and longtime Goldsmith engineer Bruce Botnick to make TMP‘s music sing like never before. “Star Trek” musical authority Jeff Bond continues his fine tradition of liner notes for every ST feature soundtrack (along with Matessino here), and runs with perhaps the most intriguing behind-the-scenes story in the franchise’s history as he chronicles Goldsmith’s rush to complete the score on time, always chased by the demons of director’s notes, unfinished visuals, and a relentlessly impossible deadline. Bond’s well-told story is complemented by quotes from the score’s key players (among them Huxley and violinist / future composer David Newman), all collected within the booklet’s polished, eye-catching graphic layout by Jim Titus.

A score written for the future that’s now become one for the ages, Jerry Goldsmith’s STAR TREK: THE MOTION PICTURE is more masterpiece than ever before, thanks to the impressive technical prowess, and thought that have gone into this excellent album. Listening to Oscar-nominated breadth of ST: TMP is an exhilarating, moving experience that conveys the power of great music to stir the imagination as to what lies “Out there,” with a score that revived our pop culture’s greatest, continuing sci-fi adventure with a singularly spectacular log entry.

Click on Link: To Purchase the STAR TREK: THE MOTION PICTURE soundtrack