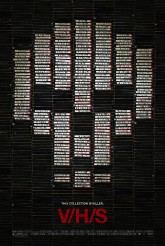 A “found video” horror anthology that is effectively creepy

V/H/S is a new entry in the popular subgenre of “found content” (it has been pointed out that “footage” refers specifically to film stock and is therefore inapplicable to video). It is an anthology that gets points for, firstly, having segments that are mostly very creepy and, secondly, for answering the question begged in too many of these films, namely why the camera operator keeps rolling when his/her life is in danger. In V/H/S, the segments are short enough that this doesn’t really come up or, when it does, the camera is conveniently dropped at the right angle and keeps rolling.

Each segment has its own director, writer, cast and production team, with the result that the credits are vast. (There is a little kicker at the end for those who stick around.) The wraparound “Tape 56,” written by Simon Barrett and directed by Adam Wingard (both men appear in the sequence), introduces us to a gang of young men who are extremely amateur porn makers, yanking the clothes off of women in parking garages so they can sell tapes of it. If there were ever guys who we wanted to have go into the basement, explore the attic, etc., these are them. They accept a job to burglarize a house and steal a rare videotape, only to find the occupant dead and hundreds of tapes. And what’s on these tapes?

For starters, there’s “Amateur Night,” written by David Bruckner & Nicholas Tecosky and directed by Bruckner, about a bar pickup that takes a weird, catastrophic turn. This isn’t precisely original, but it is nicely spooky, with a strong sense of dread.

“Second Honeymoon,” written and directed by Ti West, about a couple vacationing in the American Southwest, is low-concept, but brief enough to be suspenseful without wearing out its welcome.

“Tuesday the 17th,” written and directed by Glenn McQuaid, is a clever riff on FRIDAY THE 13TH, with especially good use of the VHS format, suggesting yet another problem with stopping this type of horror-staple killer.

“The Sick Thing That Happened to Emily When She Was Younger” suggests an episode of FRINGE or SUPERNATURAL, but takes far less time to execute its smart, disturbing concept.

Finally, there’s “10/31/98,” a Halloween tale written and directed by Radio Silence, that is at once very spooky and hilarious as its main characters spend a very long time misunderstanding what it is that they’re seeing on account of the holiday.

Taken together, the contents of V/H/S provide good horror satisfaction – we go from one unnerving, suggestive set of events to another with such speed that it is almost as though we are coming upon these little bits of recorded catastrophe and malice on our own. It doesn’t feel over-produced or over-ambitious, but rather as close to what it purports to be as it can get. The results are admirable and often honestly scary.