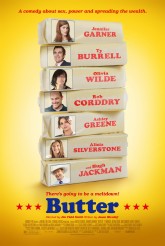 A too-soft political satire with some good performances

Satire is a particularly tough form of parody, and political satire is even tougher. Timing may not be everything, but there’s no question that having a point of reference that is still fresh in people’s minds is important. BUTTER is therefore handicapped by being too late to the table, but it might still salvage itself if it had something new to say. Instead, it tries at once to be outrageous while playing it safe and falls uncomfortably between the two.

In BUTTER, writer Jason Micallef and director Jim Field Smith use the backdrop of butter sculpting – a real-life art form – as a canvas for what appears to be their very loose take on the election process. Jennifer Garner stars as Laura Picker, who we first meet waving in triumph on a political convention stage, husband Bob (Ty Burrell) by her side. We then flash back to see how Laura reached the primaries.

It seems that Bob has been a champion butter sculptor on the Iowa State Fair circuit for fifteen years. Laura relishes the celebrity this has conferred upon the family, so she’s horrified when the commission decrees that it’s time for Bob to step down and give someone else a chance. Bob thinks this is fair, but Laura feels so violated that she vows to take up the butter-sculpting mantle in Bob’s place.

What Laura doesn’t reckon with is Destiny – that is, a ten-year-old child named Destiny (Yara Shahidi), whose new foster parents Ethan (Rob Corddry) and Julie (Alicia Silverstone) are desperate to win her over. When Destiny becomes interested in butter sculpture, Ethan and Julie are happy to support her in this endeavor – and Destiny proves extremely talented at it.

If this all sounds a little diffuse, that’s because it is. Laura’s antics are a bit like those of a character on DESPERATE HOUSEWIVES or a villainess in an old-fashioned live-action Disney comedy, except that here there seems to be an intended connection to Sarah Palin. Garner is decent in her role, but far sharper critiques have been offered up onscreen of the former vice-presidential candidate. As for having Laura’s chief opponent be a precocious ten-year-old African-American child, one can only hope this is meant as whimsy and not some kind of analogy.

BUTTER also has the strange problem of having a premise that is ostensibly comic, but becomes more reasonable the more we learn about it. Sculpting in butter may seem absurd on the surface, but it turns out to require genuine artistry and seems no more inherently odd than, say, making sand castles. Certainly it’s not a bottomless well of laughs. It doesn’t help that the contest, supposedly a font of social status, is entered by almost no one – anything this competitive should presumably have a stable of competitors.

The unsung hero of the movie is Burrell, who is wholly watchable as a decent man who’d rather not make waves; the actor’s comedic instincts are strong enough to mine all potential laughs to be found in his material. Wilde is good as the irate Brooke, but the character isn’t nearly outrageous enough to raise eyebrows. Jackman plays agreeably dumb, but likewise doesn’t do anything new.

Actually, the bonding that occurs between Destiny, Ethan and Julie is affecting in a low-key way, perhaps the most effective part of the movie.

BUTTER isn’t painful, but neither is it comically nutritious. It’s a sculpture that a lot of people put a lot of effort into, but the end result doesn’t really say much.